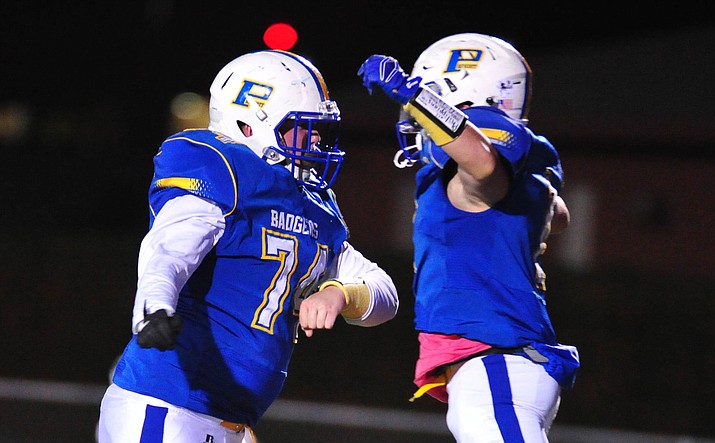 Prescott's Walker Cahn and Sylas Espitia celebrate a touchdown when the Badgers hosted rival Mingus on Oct. 26, 2018, in Prescott. The No. 11-ranked Badgers travel south to play Greenway in the first round of the 4A state playoffs Friday, Nov. 2, 2018.(Les Stukenberg/Courier, file)

Who: #11 Prescott Badgers at #6 Greenway Demons

Last Week: Prescott — Quarterback Austin Clark completed only 8 of 18 passes and threw two interceptions, while running back Sylas Espitia had 11 carries for 57 yards and a score in a 12-10 loss to Mingus for the Grand Canyon region title. The loss ended a four-game winning streak for the Badgers, who stood up defensively to the Marauders fairly well, holding a club that averages 35-plus points per game to just 12 a week ago; Greenway — Led by quarterback Tyler Duncan’s three touchdowns on 14 carries for 122 yards, the Demons won their seventh straight contest in a 29-14 victory over Moon Valley in Week 11.

The Setting: The last loss Greenway suffered came at the hands of Prescott’s rival in Week 3 as Bradshaw Mountain beat the Demons 42-20 in Prescott Valley. And with the Badgers defeating the cross-town rival Bears 26-21 in Week 7 (Oct. 5), Prescott players are likely entering Friday night’s first round of the 4A state playoffs with some confidence. It is the first time in six years the Badgers have made the state playoffs, and just the second time under head coach Cody Collett. Prescott lost 52-14 to Ironwood Ridge in Collett’s first season back in 2012. Collett and his coaching staff have the task of trying to game plan for Greenway quarterback Tyler Duncan, who has completed 66 percent of his passes this season and has thrown for 2,113 yards and 23 touchdowns, sporting a 104.4 QB rating. He’s also rushed 109 times this season for 796 yards and 11 touchdowns, second only to teammate T.J. Murphy, who has 123 carries for 861 yards and seven touchdowns.