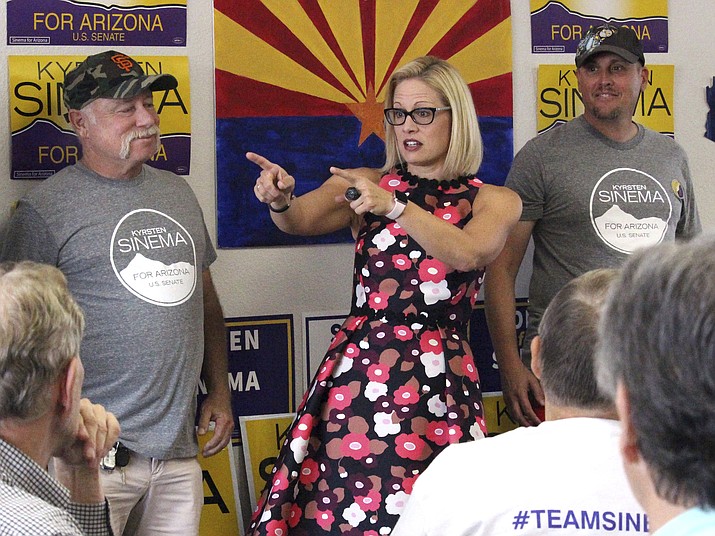 Democratic Senate candidate Kyrsten Sinema talks to volunteers at a get-out-the-vote phone bank in Phoenix, Ariz., alongside members of the "Veterans for Sinema" group in this Thursday, Nov. 1, 2018 photo. (AP Photo/Bob Christie)

PHOENIX (AP) — Two congresswomen running for U.S Senate in Arizona are crisscrossing the state, raising millions of dollars and trying to exploit every possible advantage to eke out a win in what both sides expect to be a photo-finish race.

The wild card: Angela Green, a Green Party candidate who could win votes that might have gone to Democrat Krysten Sinema, clearing a path to victory for Republican Martha McSally.

But on Thursday, Green suddenly announced she would drop out of the race and endorsed Sinema. 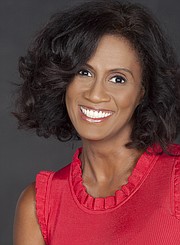 This Aug. 5, 2018, photo provided by Angela Green shows Green, a former Green Party candidate for U.S. Senate in Arizona. On Thursday, Green suddenly announced she would drop out of the race and endorsed Democrat Krysten Sinema. (Sylvia Hardt/Sylvia Hardt Photography via AP)

"After watching the debates and seeing everything, Sinema's stance on a lot of things are very close to mine," Green said in an interview with Channel 12 news in Phoenix.

The about face demonstrates the significance third party candidates are playing as Election Day nears and key races tighten across the country. There's a fear that these candidates could become "spoilers" by peeling off just enough support to let the other major party win. Democrats are especially sensitive to the issue after Green Party and Libertarian presidential candidates drew about 5 percent of the popular vote in 2016, the year that Hillary Clinton narrowly lost the presidency to Donald Trump.

"When a race is close everything matters -- every demographic group, the number of candidates on the ballot," said Nathan Gonzales, a nonpartisan analyst for Inside Elections. But, he added, that doesn't mean third party candidates will inevitably tip a close race. "We have to be a bit more nuanced."

Third party candidates tend to poll better than they actually perform on Election Day, when voters tend to revert to the two major parties. And some who cast ballots for third party candidates may not otherwise show up to the polls, so it's misleading to presume that every vote for an outside candidate is a vote stolen from a major party.

Regardless, it's a fear present on both sides of the aisle. The biggest impact this cycle may be in Kansas, where Democrats fear businessman and independent gubernatorial candidate Greg Orman, who has notched up to 10 percent support in polls.

"I wish Tim well, but have told him that my campaign is about the people of Kansas, not about establishment figures in Topeka," Orman said, referring to the state capitol.

In Georgia, a Libertarian candidate could force one of the nation's most closely watched governor's races into a December runoff.

And in Montana, Sen. Jon Tester has repeatedly won campaigns with less than 50 percent of the vote with a Libertarian candidate on the ballot. This week, an anonymous mailer circulated attacking Tester's Republican challenger, Matt Rosendale, and urging a vote for Libertarian Rick Breckenridge.

The Montana mailer and endorsement come after an anonymous donor earlier this year bankrolled a drive by a firm that normally works for Republicans to collect 5,000 signatures to place a Green Party candidate on the Senate ballot. Secretary of State Corey Stapleton, a Republican, put the candidate on the ballot but Montana Democrats successfully sued to overturn it.

In Indiana, similar mailers have circulated attacking Republican Mike Braun and promoting the candidacy of Libertarian Lucy Brenton, who openly says she wants to play the role of spoiler. She garnered 5 percent of the vote in a 2016 race and has been onstage in debates that also include Democratic Sen. Joe Donnelly and Braun. It's unclear which of the two major party candidates is threatened more by her pro-gay rights, pro-marijuana legalization, anti-tax platform.

"Do I intend to spoil the election for them? Absolutely. And here's why: something doesn't spoil unless it's rotten," Brenton said Tuesday after a debate in Indianapolis. "And the two-party system that has had a stranglehold on our country is absolutely rotten."

Nevada has another option — voters can select "none of these candidates." That helped Sen. Dean Heller win re-election in 2012. Even as then-President Barack Obama handily won the state, Heller was re-elected by an 11,000-vote margin — a total of 46 percent of the vote. That's because 44,000 voters chose "none of these candidates" rather than Heller or his Democratic opponent Rep. Shelley Berkley, who faced a congressional ethics investigation during the race.

Heller is trying to replicate that strategy as he faces another tough race this year against Democratic Rep. Jacky Rosen. Some Republicans think the none of the above option gives Heller a better chance than the Republican running for governor, Adam Laxalt. That's because there's an independent candidate in the race who could spoil it for Laxalt -- Ryan Bundy, the elder son of a rancher who became notorious for his armed standoff with federal agents in 2014.

Political maneuverings also helped shape Arizona's ballot. In 2012, Republican Jeff Flake won a U.S. Senate election there by 3.5 percentage points while a Libertarian candidate garnered 4 percentage points. The Republican state legislature complained Libertarians were siphoning GOP votes and increased the number of signatures the party needed to qualify a candidate for the ballot. There was no similar requirement for the Green Party.

Green's announcement Thursday that she was suspending her campaign may have relatively little impact. More than 60 percent of expected voters have already cast their ballots early, as is traditional in the heavily vote-by-mail state, according to the Secretary of State's office. And Green's name will remain on the ballot for those who haven't made a decision.

McSally's campaign unsuccessfully pushed to have Green included in the Senate race debate, and some Republicans hold out hope she can chisel off enough supporters from Sinema to put their candidate over the edge. A recent poll from Marist-NBC News, for example, had Sinema leading McSally by 6 percentage points when Green was omitted but only by 3 points when the third party option was included.

Still, others are skeptical Green will affect the race one way or the other. She raised less than $1500 and had little campaign presence while running a business selling organic goods and hemp clothing.

"At the end of the day I think the real narrative here is who's able to appeal to independent, unaffiliated and Republican women," said Paul Bentz, a GOP strategist in Phoenix. "They'll make the difference here."

As recently as last week, Green said she while didn't support McSally or Trump, she didn't think she should be held responsible if her candidacy lost the election for Sinema.

"I will not be responsible for who wins this race," Green said in an interview then. "So I need to let people to know that is not why I came into this race. I came into it for the people, not the politics."

For AP's complete coverage of the U.S. midterm elections: http://apne.ws/APPolitics

Voters won’t see Libertarian on ballot for governor
Analysts: Democrats made gains, but Arizona isn't purple yet
Judge: New ballot hurdle not ‘unconstitutionally burdensome’
On Road to 270, Arizona is home to best chance for a spoiler
Green Party candidate Angela Green drops out of race for Senate, props up Sinema