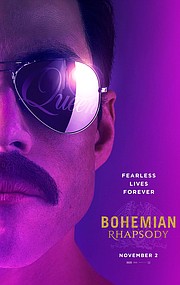 and shattered convention to become one of the most beloved entertainers on the planet. The film traces the meteoric rise of the band through their iconic songs and revolutionary sound. They reach unparalleled success, but in an unexpected turn Freddie, surrounded by darker influences, shuns Queen in pursuit of his solo career. Having suffered greatly without the collaboration of Queen, Freddie manages to reunite with his bandmates just in time for Live Aid. While bravely facing a recent AIDS diagnosis, Freddie leads the band in one of the greatest performances in the history of rock music. Queen cements a legacy that continues to inspire outsiders, dreamers and music lovers to this day. Stars Rami Malek, Lucy Boynton, Gwilym Lee, Ben Hardy, Joseph Mazzello, Aidan Gillen, Tom Hollander, Mike Myers. PG-13 – drama, biography

(NEW) THE NUTCRAKCER AND THE FOUR REALMS - Young Clara needs a magical, one-of-a-kind key to unlock a box that contains a priceless gift. A golden thread leads her to the coveted key, but it soon disappears into a strange and mysterious parallel world. In that world, she meets a 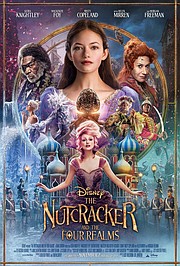 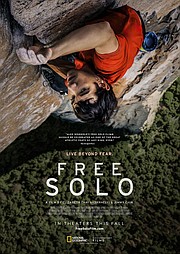 BEAUTIFUL BOY - Teenager Nicolas Sheff seems to have it all -- good grades, editor of the school newspaper, actor, artist and athlete. When Nic's addiction to meth threatens to destroy him, his desperate father does whatever he can to save his son and his family. Stars Steve Carell, Timothée Chalamet, Maura Tierney, Amy Ryan. R - drama

INDIVISIBLE - Fresh out of the seminary and basic training, Army chaplain Darren Turner receives orders to deploy to Iraq, leaving his wife behind to care for their three young children. The harsh realities of war soon take their toll on Turner and his battalion, making it hard to stay connected to his beloved family. When Darren finally comes home, the Turners must decide if they're willing to face one more battle -- the fight to save their marriage. Stars Justin Bruening, Sarah Drew, Jason George, Tia Mowry-Hardrict, Skye P. Marshall. PG-13 – drama

THE SISTERS BROTHERS - It's 1851, and Charlie and Eli Sisters are both brothers and assassins, boys grown to men in a savage and hostile world. The Sisters brothers find themselves on a journey through the Northwest, bringing them to the mountains of Oregon, a dangerous brothel in the small town of Mayfield, and eventually, the gold rush land of California -- an adventure that tests the deadly family ties that bind. Stars John C. Reilly, Joaquin Phoenix, Jake Gyllenhaal, Riz Ahmed, Rutger Hauer. R – western

MID90S - In 1990s Los Angeles, 13-year-old Stevie escapes his turbulent home life by hanging out with a new group of friends he meets at a local skate shop, plunging him into a world of fun, danger and excitement. Stars Sunny Suljic, Lucas Hedges, Katherine Waterston. R – comedy, drama

HUNTER KILLER - Deep under the Arctic Ocean, American submarine Captain Joe Glass is on the hunt for a U.S. sub in distress when he discovers a secret Russian coup is in the offing, threatening to dismantle the world order. With crew and country on the line, Captain Glass must now assemble an elite group of Navy SEALs to rescue the kidnapped Russian president and sneak through enemy waters to stop WWIII from beginning. Stars Gerard Butler, Gary Oldman, Common, Linda Cardellini, Toby Stephens. R – thriller, action

JOHNNY ENGLISH STRIKES AGAIN - The new adventure begins when a cyberattack reveals the identities of all active undercover agents in Britain, leaving Johnny English as the secret service's last hope. Called out of retirement, English dives headfirst into action with the mission to find the mastermind hacker. As a man with few skills and analogue methods, Johnny English must overcome the challenges of modern technology to make this mission a success. Stars Rowan Atkinson, Ben Miller, Olga Kurylenko, Jake Lacy, Emma Thompson. PG – action, adventure

THE OLD MAN & THE GUN - At the age of 70, Forrest Tucker makes an audacious escape from San Quentin, conducting an unprecedented string of heists that confound authorities and enchant the public. Wrapped up in the pursuit are detective John Hunt, who becomes captivated with Forrest's commitment to his craft, and a woman who loves him in spite of his chosen profession. Stars Robert Redford, Casey Affleck, Danny Glover, Tika Sumpter, Tom Waits, Sissy Spacek. PG-13 – crime, comedy

FIRST MAN - The story of NASA’s mission to land a man on the moon, focusing on Neil Armstrong and the years 1961-1969. Stars Ryan Gosling, Claire Foy. Rated PG-13 – drama, history

A STAR IS BORN - Seasoned musician Jackson Maine discovers -- and falls in love with -- struggling artist Ally. She has just about given up on her dream to make it big as a singer until Jackson coaxes her into the spotlight. But even as Ally's career takes off, the personal side of their relationship is breaking down, as Jackson fights an ongoing battle with his own internal demons. Stars Bradley Cooper, Lady Gaga, Andrew Dice Clay, Dave Chappelle, Sam Elliott. Rated R – drama, romance