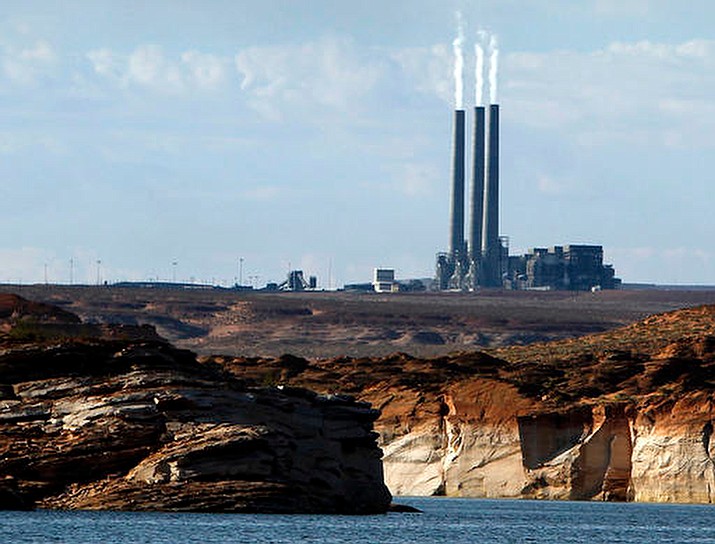 Smoke rises from the stacks of the main plant facility at the Navajo Generating Station, as seen from Lake Powell in Page on Sept. 4, 2011. (Ross D. Franklin/AP, File)

FLAGSTAFF — As states shy away from coal-fired power, a northern Arizona tribe is exploring the purchase of a coal plant on its land.

The Navajo Generating Station near the Arizona-Utah border and its feed mine are slated to close at the end of 2019, the victims of cheaper power from natural gas.

A potential new owner and operator ended negotiations to take over the plant in September after they couldn't find anyone to buy the power. The Navajo Transitional Energy Company said it's now considering ownership of the plant at the invitation of the tribe.

Clark Moseley, the company's chief executive, said he expects to have a plan for the 2,250-megawatt plant in place by the end of the year.

"We are currently working to evaluate all possible solutions to ensure the continued operation of Navajo Generating Station and Kayenta Mine past 2019," he said in a statement Thursday.

Hundreds of Navajos work in the coal industry, and the revenues make up a hefty chunk of the tribe's general budget, not including federal money. The tribe created the Navajo Transitional Energy Company to buy a coal mine in northwestern New Mexico five years ago. The company also owns a 7 percent stake in two units at the Four Corners Power Plant fed by the mine.

The move to buy the Navajo Generating Station near Page is considered risky. The current operator, the Salt River Project, has said the plant no longer is economical. The Congressional Research Service recently found that one of the major users of the power, the Central Arizona Project, is not legally obligated to purchase electricity from the plant under new ownership.

Coal also has fallen out of favor in nearby states. Navajo government officials are fighting a ballot measure in Arizona that would require utilities regulated by the state to get 50 percent of their power from renewables by 2030. The current standard is 15 percent by 2025.

Navajo Transitional Energy approached the Salt River Project in mid-October to review data on the power plant, said SRP spokesman Scott Harelson. The plant likely would shut down temporarily even as the Navajo Nation vets it. At least 150 employees already have been moved to other facilities in anticipation of the shutdown, and SRP won't stray from decommissioning plans, Harelson said.

"Time is not on our side, but it doesn't necessarily mean we're going to throw in the towel because we're not," Bates told The Associated Press at the time. "It's not over until it's over. And it's over when leadership speaks, no one else."

The tribe's move toward ownership comes ahead of an election that will result in a new president and speaker. Begaye didn't advance beyond the presidential primary, and Bates didn't seek re-election.

One of the presidential candidates, Joe Shirley Jr., said he would do what he can to save the jobs and revenue but acknowledged major hurdles exist.

"I don't think we have the wherewithal to purchase anything of that magnitude," he said. "The next administration needs to take a real good look-see on the feasibility of spending billions of dollars on a thing that possibly could go away."

Shirley's challenger, Jonathan Nez, did not immediately respond to requests for comment.

Percy Deal who lives near the coal mine at Big Mountain said Navajo leaders are disillusioned in thinking that coal should be a part of the tribe's future or that President Donald Trump's administration can save the industry. He envisions the time when coal no longer is extracted from what he called the soul of Mother Earth.

"Everything that's essential to our way of life is going to begin to heal and recover," he said. "I see that day coming, and I'm really looking forward to it."