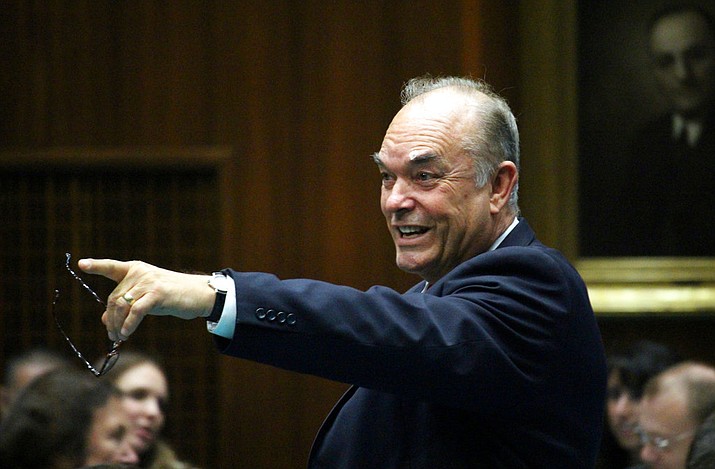 In this Feb. 14, 2017, file photo, state Rep. Don Shooter is seen on the floor of the Arizona House in Phoenix. Shooter is the former Arizona representative who became the first state lawmaker expelled for sexual misconduct since the #MeToo movement swept the nation in October 2017. (AP Photo/Bob Christie, File)

PHOENIX — Insisting his constituents still want his services, ousted state Rep. Don Shooter filed the paperwork Wednesday to get back in the Legislature, this time as a senator.

“I think I was a pretty decent legislator,’’ the Yuma Republican told Capitol Media Services after submitting more than 810 signatures to qualify for the August primary. He needs just 474 of those to be valid to get his name on the ballot.

It was the House that voted 56-3 to oust him on Feb. 1 after concluding he had sexually harassed fellow legislators, lobbyists, staffers and others.

“The people never got to have their say,’’ he said. Running for Senate, said Shooter, provides that public input.

Republican Sine Kerr, appointed earlier this year to replace Steve Montenegro when he made an unsuccessful bid for Congress, wants to hang on to the seat. And there’s a third Republican in the race, Brent Backus.

Whoever survives the GOP primary will face off against Democrat Michelle Harris.

Shooter, who previously served six years in the Senate before being elected to the House two years ago, said he wants to focus on legislative priorities like water law and proper funding of public education. But he acknowledged that his ouster -- and the $1.3 million claim he already has filed against the state that he was railroaded from office and libeled as a precursor to a lawsuit -- could to mean he is busy answering questions during the campaign not about the issues but about what led to his being expelled.

If nothing else, Shooter said he is learning to rein in his tendency to make what he contends were just wisecracks and jokes -- the comments that got him into hot water in the first place -- especially in unfamiliar situations.

“The main thing that I’ve learned is just to know your audience,’’ he said. “Don’t say stuff in front of people that don’t appreciate it.’’

Some of the allegations against Shooter was that he made “unwelcome sexualized comments’’ to Rep. Michelle Ugenti-Rita, including about her breasts.

A special investigator hired by the House also said there is evidence that Shooter acted inappropriately with women. There also was evidence that Shooter told Mi-Ah Parish, a Korean-American woman and then publisher of the Arizona Republic, that the one thing he has not done on his bucket list was “those Asian twins in Mexico.’’

Shooter’s ouster was the first expulsion of a lawmaker since 1991 when the Senate ejected Carolyn Walker, then the Senate majority whip, in the wake of the “AzScam’’ investigation. She and other lawmakers were caught in an undercover sting operation agreeing to take money in exchange for their votes; all the others resigned.

The last House expulsion came in 1948 when two members were removed following a fistfight.