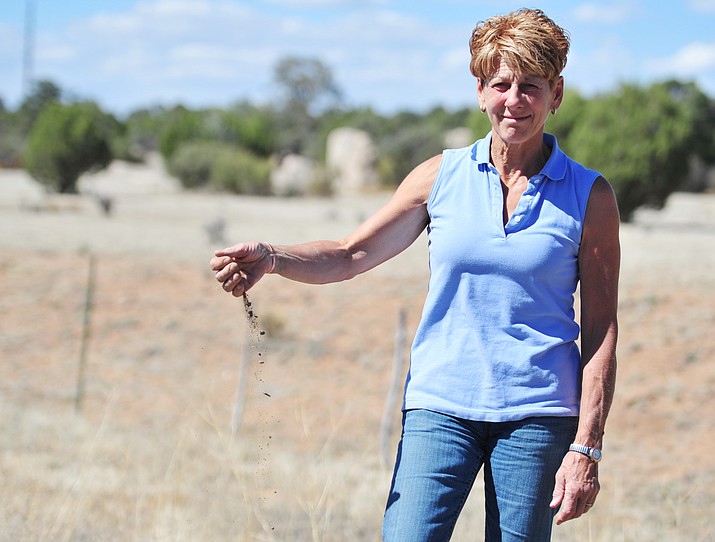 Kim McElroy and Dave Pawel own and operate Broken Horn D Ranch. They have about 4,500 acres of land scattered throughout the area that they graze their cattle on. This year, however, much of the land has dried up so bad that there’s not enough grass or brush for the cattle to graze on so they've had to reduce their livestock by 35%. (Les Stukenberg/Courier)

The local ranch raises grass-fed Criollo cattle and sells most of it directly to the consumer at venues such as the Prescott Farmers Market.

But as grasses have dried up, so has much of their herd.

“We are fairly consistent in our ability to maintain through dryer times, but this drought has been so long and so severe, that we’re down 30 to 40 percent,” said Dave Pawel, Jr., who owns and runs the ranch with his wife, Kim McElroy. “The cattle just flat don’t have enough to eat, so we either have to move them or get rid of them,”

Normally sitting at about 250 head of cattle, the ranchers are currently handling about 150.

“And that may go less,” Pawel said.

In moderately tough times, ranchers like Pawel and McElroy can typically afford enough hay to make up for what their cattle aren’t getting in the fields, but since just about every rancher in the southwest is in the same boat, the price of hay has gone up drastically.

Also hurting their bottom line is a saturation in the cattle selling market. As more and more ranchers turn to reducing their herds, basic economics once again come in to play.

“We don’t normally have to sell at a local auction barn, but because we have to and everybody else has to, the prices are super low,” Pawel said.

“The drought is impacting the ranching community in my three county area of Coconino, Yavapai and Mohave in a broad and drastic way,” Schlittenhart said. “I have spoken with numerous ranchers who have already reduced their herd numbers and are considering additional reductions. Some are even contemplating a total herd liquidation due to a complete absence of forage and water.”

One of the disaster relief programs Pawel and McElroy have already applied for is the Livestock Forage Disaster Assistance Program. It provides financial assistance to ranchers that have been impacted by drought or fire.

“It’ll pay us some money to be able to buy some more hay to keep the cows going,” McElroy said.

Even with that expected break, however, Pawel and McElroy are facing a major setback that will impact their business for years to come.

“We don’t have any loans, we’re not going to have to borrow money, but we’re so far from making money this year it ain’t even funny,” Pawel said. “The ripple effect of this will probably impact us for five years.”

Damaged, but not broken, all they can do at this point is wait for the summer rains.

“We are praying for the monsoon to come early and stout,” Pawel said.