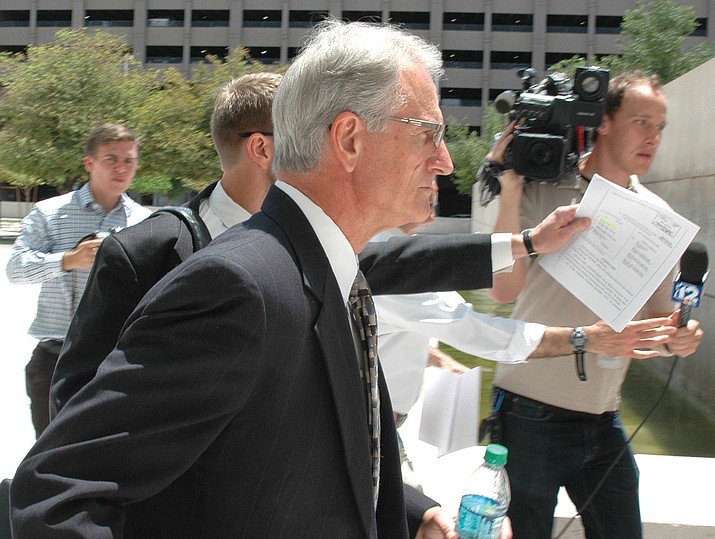 PHOENIX — Plea deals offered to a former state utility regulator and a lobbyist suggests that federal prosecutors are not done looking at other possible criminal activities at the Arizona Corporation Commission.

Assistant U.S. Attorney Frederick Battista disclosed Wednesday that his office had offered to let Gary Pierce plead guilty to a single felony and be placed on probation if he would cooperate with the government on other potential criminal matters. Pierce, who had been commission chairman -- and whose indictment on charges of bribery and fraud relate to activities he undertook in that role — rejected the bid.

Lobbyist Jim Norton also got a similar offer, Battista said. But this one had a twist: Prosecutors would consider dismissing all the bribery and fraud charges against him if he provided “extraordinary’’ cooperation with them.

The disclosures came ahead of a jury being selected in federal court here to determine the fate of not only Pierce and Norton but also Pierce’s wife, Sherry, and utility owner George Johnson.

Johnson and Sherry Pierce also got similar offers to plead to a single felony and avoid prison, but without any requirement to cooperate. In Johnson’s case, the sole condition was that he agree to a maximum fine of up to $100,000; Sherry would have simply been allowed to plead guilty to a felony and be placed on probation with no other preconditions.

Defense attorneys said these, too, were rejected.

The indictment alleges that Johnson funneled $31,500 through Norton and now ex-wife Kelly Norton, an unindicted co-conspirator, to Sherry Pierce for what the government contends was really a do-nothing contract. That money eventually wound up in the couple’s joint bank account.

There also was a plan, which never went through, to have Gary Pierce purchase property but have the paperwork recorded so it appeared the transaction was paid for by Norton instead of Johnson.

In essence, the government is arguing that the money and the land offer was in exchange for Pierce’s votes on two issues.

One now allows the owners of small utility companies to pass along the cost of their personal income taxes to customers. The other specifically increased the value of Johnson Utilities, a move that, in turn, increased the amount the company can charge ratepayers.

U.S. District Court Judge John Tuchi made some last-minute rulings Wednesday of what jurors can and cannot be told and see during what could be a monthlong trial.

One deals with the fact that the witness list includes several people who also were members of the commission at the time of the alleged bribery scheme.

Tuchi said that attorneys could ask other commissioners if their votes on the two matters involving Johnson Utilities would have been different had they known about the payments to Sherry Pierce and the proposed land deal. Tuchi said the answers to those questions could inform jurors of whether Gary Pierce had an intent to conceal the transactions.

Tuchi also agreed to allow defense attorneys, in their opening statements set for Thursday to show the jurors a single photo of Pierce in his official position at the commission. But he rejected a defense bid to display other photos, including the couple and children, the couple embracing and the couple kissing, saying they had nothing to do with the case.

The offer of plea deals disclosed Wednesday is not the first time prosecutors have suggested that there could be more indictments.

Nearly a year ago, prosecutors told Tuchi they were offering to tell the four defendants in this case who and what else they were investigating, but only if they agreed not to share that information with anyone else. That offer came as the defense attorneys sought details of the FBI inquiry that led to the indictment.

In a court filing at the time, the prosecutors essentially admitted they pretty much tripped across the facts that led to the bribery and fraud charges in this case “during a much larger investigation.’’ They provided no specifics.

But in communications with defense attorneys, Battista said he does not want to tip off those other targets — targets that could include not only other current or former members of the commission but also potentially executives at other utilities.