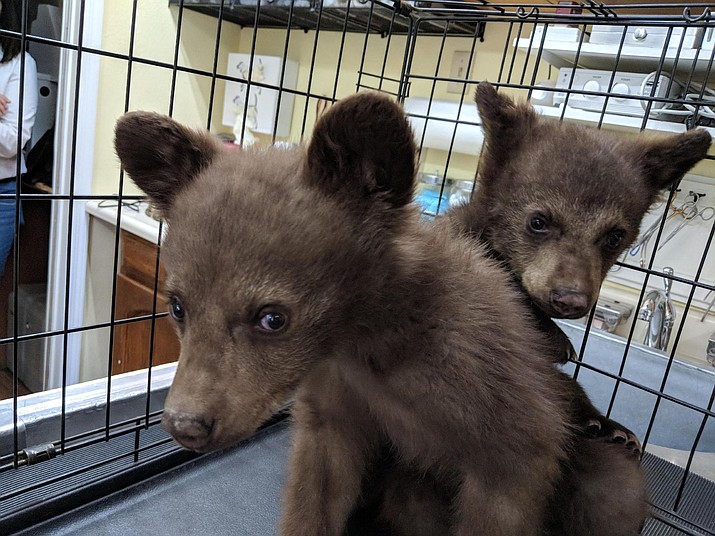 Two orphaned bear cubs have been placed in the care of Bearizona wildlife rescue park in Williams after their mother was euthanized. The park said the 4-month-old black bears were rescued from a treetop in Arizona's White Mountains, and were so small a climber was able to lower them to safety in a backpack. The park says the Arizona Game and Fish Department was forced to euthanize the cubs' mother after twice removing her from a residential area in the town of Pinetop-Lakeside. (Bearizona)

Bear cubs rescued after mother is euthanized by Courier Video

These orphaned 4-month-old black bear cubs were rescued from a treetop in the White Mountains. (Bearizona)

WILLIAMS, Ariz. (AP) — A wildlife rescue park south of the Grand Canyon is caring for two orphaned cubs after their mother was euthanized.

The 4-month-old black bears had been rescued from a treetop in Arizona’s White Mountains over the weekend. A local tree trimmer carried one down in a backpack, and the other male climbed down on its own.

Their new home is at Bearizona in Williams.

The Arizona Game and Fish Department says it euthanized the cubs’ mother because she already had been removed once from the town of Pinetop-Lakeside.

Spokesman Bill Andres says a local resident was issued a written warning for leaving out a buffet of strawberries, oatmeal, peanuts and water for the bears.

He says authorities learned the adult bear had cubs only after she was put down.