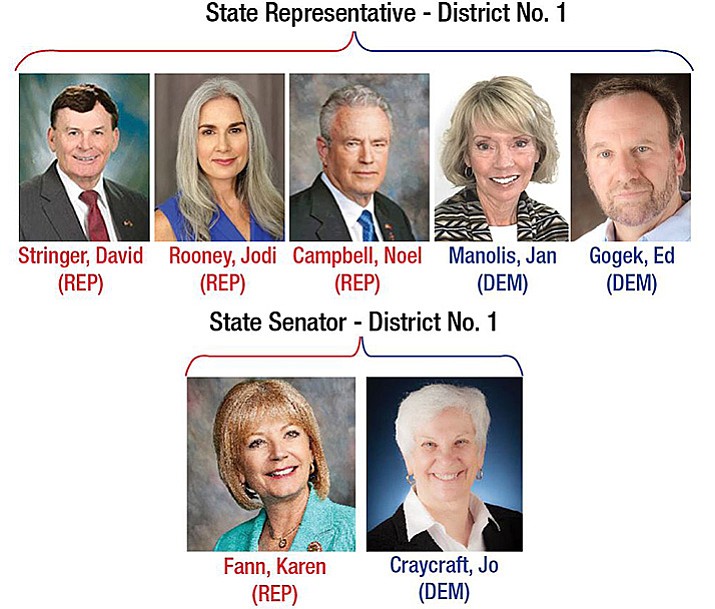 Seven candidates, including the three incumbents, appear to be headed to the Aug. 28 primary for three Arizona Legislative seats in Prescott-area District 1.

By the 5 p.m. Wednesday, May 30, deadline for filing nominating petitions, two people — one Republican and one Democrat — had filed to be listed on the primary ballot for the senator position in Legislative District 1 (LD1), according to information from the Arizona Secretary of State’s website.

And in the race for two LD1 representative seats, five candidates — three Republicans and two Democrats — filed by the Wednesday deadline.

The August primary will determine the Republican and Democratic nominations, and the race will then be decided in the Nov. 6 election.

Currently, the LD1 State Senator position is held by Prescott resident Karen Fann. She was the only Republican to file for the position.

Also filing in the senate race is Jo Craycraft, a Democrat from Prescott.

(Signature requirements are established through a formula set in state statute, and are based upon state and local voter registration figures as of March 1, 2018, according to a news release from the Arizona Secretary of State’s Office).

Also filing as a Republican in the House race was Prescott Valley resident Jodi Rooney. She filed 918 signatures — exceeding the 592 minimum.

The LD1 House of Representative race also has two Democratic candidates — Ed Gogek and Jan Manolis, both of Prescott.

Matt Roberts, director of communications for Arizona Secretary of State Michele Reagan, said the department confirms that the number of signatures meets the state requirements. But, he added, any further verification of signatures from qualified electors is left up to the political opposition.

The period for filing candidate challenges begins May 31 and ends June 13, Robert said, adding that challenges are filed in Maricopa Superior Court.