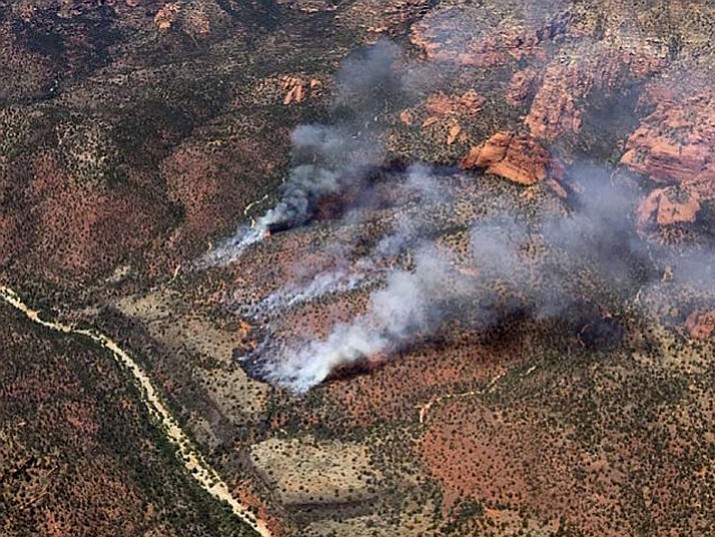 According to National Wildfire Coordinating Group, 230 acres have been burned as of Tuesday morning. The fire was initially reported by a member of the public and Turkey Butte Lookout on Monday. (Coconino National Forest)

SYCAMORE CANYON -- Firefighters responded to a wildland fire in Sycamore Canyon over Memorial Day Weekend northwest of Sedona, according to the Coconino National Forest Service.

Smoke could be seen Monday from Cottonwood. According to National Wildfire Coordinating Group, 230 acres have been burned as of Tuesday morning. The fire was initially reported by a member of the public and Turkey Butte Lookout on Monday.

According to Coconino NFS, the fire is “human-caused.”

“As far as the Forest Service tracks fires, there are only two kinds; lightning and human,” said NSF Deputy Public Affairs Officer George Joezens. “We have the tools and science to know there was no lightning in the area. It has to be human, there is no other way to start a fire.”

The origin of the fire has now been determined to be on the west side of the canyon, which is located on the Prescott National Forest approximately 14 miles northwest of Sedona, according to a statement released by Coconino NSF.

“At this time, the fire has been kept to the west side of the canyon and light winds are pushing smoke toward the west/northwest,” the release stated.

25 percent of the fire has been contained according to NWCG.

According to Coconino NFS, 100 personnel have been used to contain the fire. Resources include four helicopters, two air attack resources, five crews and three engines

Yavapai County released Stage 2 fire bans earlier this month. Burn permits for both residential and commercial are not being issued.

• Use of model rockets is prohibited

• Use of fireworks and other pyrotechnic displays are prohibited except by commercial special events permit.

• No smoking outside of vehicles, outside of residential yards, or outside of designated smoking areas.

• No outdoor use of firearms

• Welding, cutting and grinding is prohibited (Permission may be granted under special circumstances and repair situations as approved by the Chainsaws).

• Chain saws are allowed with a spark arrestor, water or fire extinguisher and a fire watch.

• Warming fires, campfires, as well as charcoal and wood-burning barbecues (ember and ash producing) are prohibited in all locations. This also prohibits the use of other devices that produce open flame such as tiki lamps.

• The use of propane, natural gas or other gas flame-producing barbecue cooking grills or fire pits may be used as long as they are constantly attended, are in an enclosed device, and can be turned off.