Dahlberg: A golden marriage between team and city in Las Vegas
AP Column 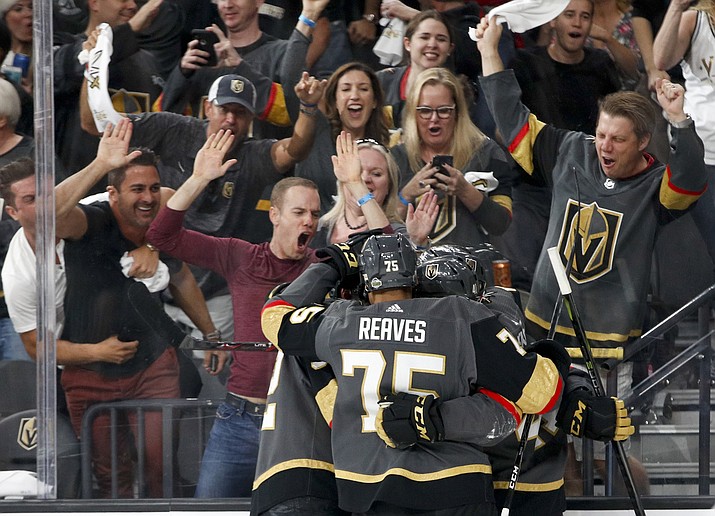 In this Friday, May 18, 2018, file photo, Vegas Golden Knights left wing Tomas Nosek, left, celebrates with teammates after scoring against the Winnipeg Jets during the second period of Game 4 of the NHL hockey Western Conference finals in Las Vegas. The love affair between a city and its new team wasn't totally unexpected. Las Vegas was, after all, a town starved for major league sports. (AP Photo/John Locher, File)

Gerard Gallant took time out from preparing for the Stanley Cup finals to watch a Little League game this week, something that might be surprising to those who think there is little in Las Vegas besides showgirls, craps tables and nightclubs.

There is a real city beyond the Las Vegas Strip, though, and that isn’t a surprise to the Vegas Golden Knights coach or the rest of a team that has embraced a city that has eagerly embraced them back.

They play here, and they also live here. Turns out hockey works in the desert — even for real hockey guys.

“It’s been, for all of us, one of the neatest experiences of our lifetime,” general manager George McPhee said. “Maybe the neatest, most unique experience. Las Vegas has been a wonderful place to live and work.”

The love affair between a city and its new team wasn’t totally unexpected. Las Vegas was, after all, a town starved for major league sports.

But no one could have expected a hockey team would also help a city deal with its grief after a gunman killed 58 people on the Las Vegas strip just days before the team’s home opener.

They’ve done that and more, thrilling a town that’s hard to impress on a remarkable run to the finals in their first year of existence.

“We knew we couldn’t heal everyone,” goalie Marc-Andre Fleury said. “But we wanted to give (the city) something to cheer for, to be proud of their team.”

They call themselves the “Golden Misfits” because they all ended up in Las Vegas after being discarded by other teams. Even Gallant was unceremoniously dumped from his last job, kicked off the team bus after being fired by the Florida Panthers.

They came to this gambling city wanting to be wanted again. And a city that waited 112 years for a major sports franchise to call its own responded with open arms.

The games are all sellouts, of course. But the practices have also become events to see and be seen, with hundreds of fans crowding the team’s practice rink in the planned community of Summerlin where most players live.

And everywhere people wear Golden Knights hats and shirts and talk about strange things like icing and forechecking.

“I see it every day of practice when you got 800 people watching our practices,” Gallant said. “It’s definitely not one on one with people, but you see the fan support that we get is unbelievable. They love our players, they love our team, and they love what’s going on, and I know our players appreciate the things they do for us.”

One of those players showed that Thursday night at another Little League game. Alex Tuch was watching the son of an assistant coach play, but a lot of other people at the ballpark were watching him.

As word spread that a Golden Knights player was in the stands, kids of all ages surrounded Tuch, who graciously obliged one picture request after another.

For some, the bond between city and team started developing when billionaire Bill Foley plunked down $500 million and Las Vegas was awarded an expansion franchise. For others, it began when Foley announced the team would be called the Golden Knights and started selling season tickets.

For many, though, it came when Deryk Engelland — a Las Vegas resident for more than a decade — stood on the ice before the first home game with hardly a dry eye in the crowd. It was nine days after the massacre of fans at a country music concert just down the street from the T-Mobile Arena where the Knights play, and emotions were raw.

“I know how special this city is,” he told the crowd. “To the families and friends of the victims, know we will do everything we can to help you and our city heal.

“We are Vegas Strong.”

Engelland, a defenseman, had scored only 22 goals in eight years in the NHL prior to that game. But he scored one that night and, for a brief moment at least, gave a grieving city something to cheer about.

And it was Engelland who was chosen on a team with no captains to accept the trophy for winning the Western Conference finals from NHL deputy commissioner Bill Daly.

“After Oct. 1, those first games ... you want to play for the city, the people that were affected by it,” Engelland said. “To make this run, it’s awesome for us, but it all comes back to the city and the people affected by that.”

In a city that values winners, it helps that the team McPhee put together is a big winner. That was unexpected by most in hockey, who figured the Knights would finish last in their division like most expansion teams do, even though the NHL made sure they had a lot of good players to choose from.

Now they’re playing for one of the great trophies in sports: the Stanley Cup.

“It’s been fun to watch,” NHL commissioner Gary Bettman said. “Nobody could’ve anticipated it. Our goal was that they be playing meaningful games in March and April, and if they were lucky, they might make the playoffs. Whoever could have predicted that they’d be on this run?”

Not many, and that includes the bookies on the Las Vegas Strip. They made the Knights as much as a 500-1 underdog to win the Stanley Cup, and will likely lose several million dollars if it actually happens.

It just might, and they don’t seem to care.

The bookies live here, too. And they want to see the Stanley Cup paraded down the Las Vegas Strip.

Tim Dahlberg is a national sports columnist for The Associated Press. Write to him at tdahlberg@ap.org or http://twitter.com/timdahlberg.