There’s no avoiding it: Artificial Intelligence is going to take jobs, so be ready
‘Future-proofing’ your job 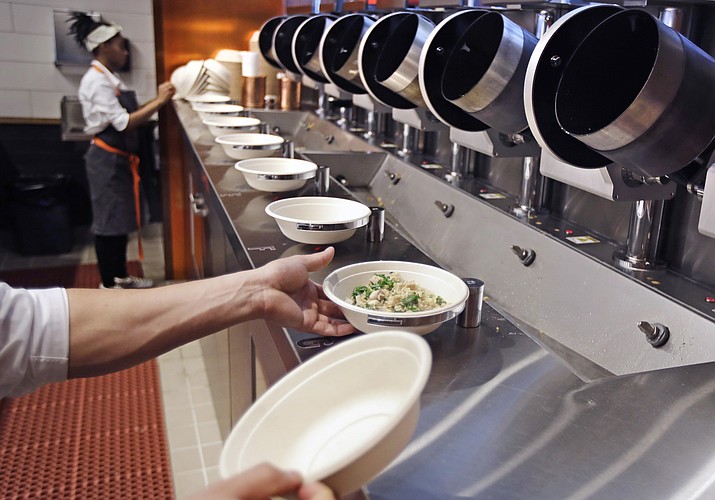 A worker lifts a lunch bowl off the production line at Spyce, a restaurant which uses a robotic cooking process, in Boston, Thursday, May 3, 2018. Robots can’t yet bake a souffle or fold a burrito, but the new restaurant in Boston is employing what it calls a “never-before-seen robotic kitchen” to cook up ingredients and spout them into a bowl. (Charles Krupa/AP, file)

The story of robots — what we now generally refer to as “artificial intelligence” — taking over human jobs has long been a staple of science-fiction movies, and usually is portrayed as part of a dystopian future.

The most notable exception was the “Star Trek” television series, under creator Gene Rodenberry’s guidance. In one episode, the Captain of the Enterprise said, “The challenge [of the 24th century] is to improve yourself. To enrich yourself. Enjoy it.”

That future may indeed be the one people should strive for, as robots that can do the work that humans have had to do for centuries arrive on the scene.

“There’s so many different things that are repetitive, and almost anything that is repetitive can be taught,” to, and then repeated by, a machine,” said Dr. Jon Haass, department chair of the Cyber Intelligence and Security degree program at the College of Security and Intelligence at Embry-Riddle Aeronautical University in Prescott.

“We see it on the horizon with truck drivers, if we look out far enough, we’re going to see airline pilots, even teaching and professors, like myself — could find out in 20 to 30 years, that computers could do a better job,” he said.

“A lot of the desk jobs that happen today, people filing paperwork, underwriters for mortgages and stuff like that, I think a lot of that will eventually be automated through AI,” said Victor Benjamin, an assistant professor of Information Systems at ASU’s W.P. Carey School of Business.

Both Haass and Benjamin compared the coming sea change to the Industrial Revolution of about 1760 to 1820, when mechanical devices took over labor that humans were required to perform.

Still, there will be jobs that AI can’t do, and those are the ones that young people should prepare to do.

“I think the immediate ones we traditionally think about are creative jobs: songwriting, music writing, writing movies or video game development,” Benjamin said. “Also, a lot of jobs in the service economy. No one would want a robot waitress, or (a robot) giving you a haircut. I’m sure there’s still going to be chefs.”

Haass said, “Creative jobs that require you to understand the entire concept — now, we can’t predict what it’s going to be like in 30 years — but our children and their children should be thinking about places (to work) where creativity is beyond the pale of algorithms.”

And, despite some segments of American society that would look down on skilled trades, AI would have a tough time doing them.

“Jobs like being a plumber, even though a lot of people don’t think of those trades, they’re jobs that can’t be done by a machine,” Haass said.

He added that not all kinds of service jobs are safe. “The food service industry, those jobs are at risk. Hamburger flippers are going to become automated. In the back of McDonald’s, there’s going to be a machine that can work for less and make the burgers the correct way every time.”

“As far as finding jobs that are future-proof, I think that definitely people want to start considering that, but some industries are just going to be hit harder than others. And the people in those industries are unfortunately going to suffer a bit from it … and retrain themselves into something else.”

Although the transition to AI doing jobs sounds frightening to some, Benjamin said there are advantages.

“It’s not healthy for humans to sit in cubicles for eight hours a day. So maybe automating some of that isn’t all that bad, and those people could find new areas to go work,” he said.

“A person’s work is constantly evolving. And anyone who does not evolve with society could find themselves left behind,” Haass said.

Watch: Robotic art fetches over $1 million at debut show
Japan more at ease with robots and automation than US
Automated bartending hits Valley, but will it replace humans?
White House proposes guidelines for regulating the use of AI
Watch: SpaceX Rocket Carrying AI Robot Into Space