Preview: Defenders as important to Fleury as he is to Golden Knights
NHL Stanley Cup Finals 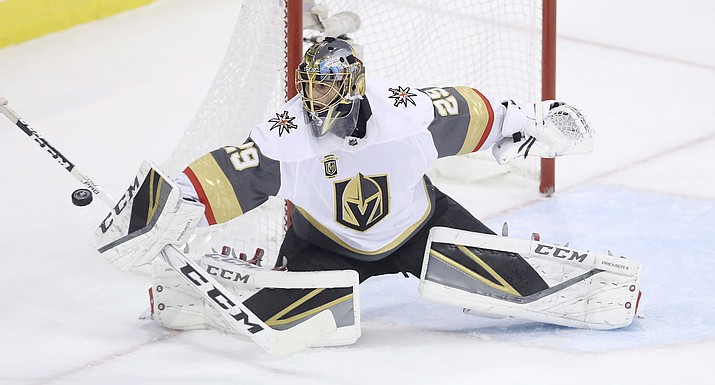 LAS VEGAS — Marc-Andre Fleury has been the foundation for the Vegas Golden Knights' run to the Stanley Cup Final.

Yet while he has a 1.68 goals-against average and .947 save percentage, he'll be the first one in the locker room to credit the defensemen in front of him.

"It's a team game — win as a team, lose as a team," said Fleury, who looks to become the 11th goaltender in NHL history to have his name on the Cup at least four times — and the fourth of that group to win with multiple teams.

"These guys are a big part of our success. We're well balanced, we got some veteran guys, some younger guys, got some offensive guys, some defensive guys playing together. Those guys have been rallying all playoffs, trying to help me out, blocking shots and letting me see the puck, so it's been a lot of fun."

The pairings of Nate Schmidt and Brayden McNabb, Shea Theodore and Deryk Engelland, and Colin Miller with Luca Sbisa or Jon Merrill, have helped the Golden Knights become a very tight defensive team during the playoffs, something that will have to carry into Game 1 at T-Mobile Arena, on Monday against the Washington Capitals.

Schmidt has developed into the team's top defenseman after struggling to find consistent ice time in Washington last season, when he averaged 15:29 on the ice. The fifth-year pro leads the Golden Knights with an average 22:14 on the ice and brings a familiarity to the Final, having played with Washington's top scorers Evgeny Kuznetsov (24 points) and Alex Ovechkin (22), who rank first and second, respectively, in overall playoff scoring.

"I know a lot of those guys, I know what they like to do," said Schmidt, who has six points (2 goals, 4 assists) in the postseason. "For what I want to do on the ice, it helps me and I think it helps our group as well that we've had success against them. But it's a whole other type of animal this time of year."

The Golden Knights swept the regular-season series against Washington, winning 3-0 on Dec. 23 in Vegas and 4-3 on Feb. 4 in D.C.

With five more Capitals have double-digit points — Nicklas Backstrom (16), John Carlson (16), T.J. Oshie (15), Lars Eller (13) and Tom Wilson (11) — Vegas will need one last big effort from a defensive group that has helped allow the second-least number of goals among playoff teams that have played 10 games.

Washington coach Barry Trotz said he knows the Golden Knights have three dynamic duos that each feature one offensive guy who can skate and move the puck — that being Miller, Theodore, and Schmidt — paired with more of a traditional stay-at-home defenseman who isn't afraid to get physical, block shots and slow the opposing team's pace, such as Sbisa, Engelland, Merrill and McNabb.