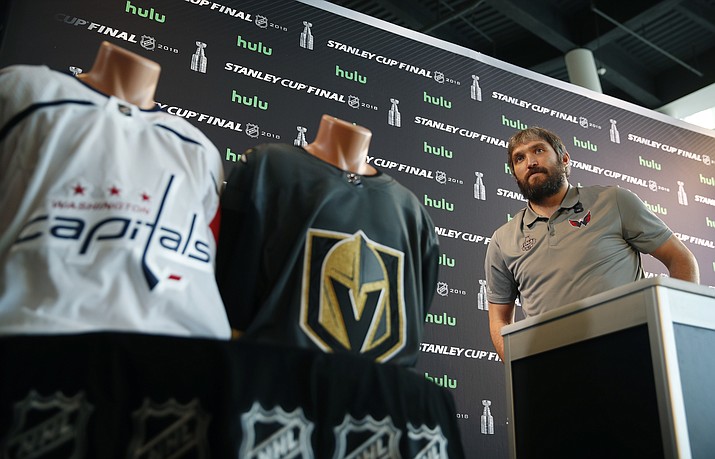 Washington Capitals left wing Alex Ovechkin meets with members of the media during an NHL hockey media day for the Stanley Cup, Sunday, May 27, 2018, in Las Vegas. (AP Photo/John Locher)

LAS VEGAS — The Washington Capitals have waited nearly 44 years to raise the Stanley Cup for the first time.

Their only remaining obstacles are some desert-dwelling misfits who refuse to wait for anything.

The expansion Vegas Golden Knights are just four wins away from an astounding championship when they host Alex Ovechkin’s long-striving Caps on Monday night to open a thoroughly improbable Stanley Cup Final.

Even the players from the NHL’s last two teams standing seemed a bit surprised by their achievements when they gathered Sunday in balmy 84-degree Nevada weather.

“Who would have thunk it?” asked Vegas defenseman Nate Schmidt, who played the previous four seasons for the Capitals. “The Stanley Cup Final that was never meant to be, right?”

Indeed, a first-time NHL champ will be crowned next month after a Final between two teams that arrived at hockey’s ultimate destination from very different directions. While the Caps finally climbed over the hump in the Eastern Conference, the Golden Knights have been bulldozing every logical obstacle in their path since October.

“We’ve been able to do some things in the playoffs, but we never got to that last stage until now,” Washington forward T.J. Oshie said. “And everybody knows what Vegas did in the first year is very special. We’re both hungry. This is going to be a beast of a series.”

The Golden Knights have exceeded every expectation by utilizing a rich expansion draft and multiple clever coaching moves to create a team that dominated the Pacific Division and then rampaged through the Western Conference playoffs. Their story still carries a ring of impossibility, but they’re close to adding a real ring to every hand in the dressing room full of self-described “Golden Misfits,” as their T-shirts say.

The Capitals have repeatedly fallen short of their postseason goals during Ovechkin’s career, including a heartbreaking shutout loss to Marc-Andre Fleury in Game 7 of the second round against Pittsburgh last spring. After falling to Fleury’s champion Penguins in the past two postseasons, the Caps revamped their roster with youth and finally overcame years of playoff disappointment to reach their first Final in two decades. Of course, Fleury is in the way again — in goal for the Golden Knights.

Neither team was the favorite to get this far. Neither team is ready to stop now. While Capitals coach Barry Trotz skated his now-customary hot lap before practice at T-Mobile Arena, the Golden Knights had their usual standing room-only crowd for practice at their training complex in suburban Summerlin.

Their grip on this sports-hungry town was already strong, and the 24-hour gambling mecca will come to a standstill this week during the Cup games in the arena behind the New York New York hotel-casino and its 150-foot Statue of Liberty, which has been wearing a Golden Knights jersey since April.

Speaking of larger-than-life figures in hockey sweaters, this series showcases two major talents who can cement a legacy.

Ovechkin is a formidable scorer and competitor, but he has never won an Olympic medal with Russia or a Stanley Cup ring with the Caps. He’s keeping a sense of humor about this momentous trip: With a straight face Sunday, Ovechkin said Russian President Vladimir Putin had called him to wish him luck, before adding: “I’m just joking.”

Fleury already has three Stanley Cup rings, but he has added another incredible act to his career with tenacious play for the Golden Knights, whose inexperienced pros have leaned on him to get through tough nights.

“I think it’s weird seeing that team here, being in the Cup the first year,” said Brooks Orpik, the only Washington player with a ring. “Obviously, I’m not surprised (Fleury) is here. Without him, they weren’t beating us last year. He singlehandedly won a couple of games for (Pittsburgh) when we totally outplayed them.”

Here are more things to know about the ice hockey event in the Mojave:

The winning coach also will raise the Stanley Cup for the first time in a fitting peak to two careers built on resilience. The 55-year-old Trotz never played in the NHL, but his 19th season as an NHL coach is ending in his first Cup Final. Gerard Gallant was a solid NHL forward for Detroit, but the 54-year-old bench boss had never even won a playoff round as an NHL coach before this spring.

Several Capitals pointed out the importance of minimizing turnovers against the Golden Knights, whose counterattacking acumen and team speed cause problems. “They’re a very fast team and when you turn pucks over, they’re like a shark smelling blood in the water,” Oshie said. “They all stop on a dime and want to take it the other way. That’s how they get a lot of their offense.”

Ovechkin could become the first Russian captain to raise the Stanley Cup. If the Knights win, they don’t have a captain to raise the Cup first. Gallant and GM George McPhee decided to rely on a six-man leadership council instead. “I think that’s the best decision we ever made,” Gallant said. “Sure, there’s guys who could have been captain in our group, but it was their first year — and we really didn’t think we’d be grabbing the (Western Conference) trophy the other night in Winnipeg.”

The Golden Knights’ matchups against the teams that let them go in the expansion draft have been a consistently entertaining feature of this season. For the grand finale, Schmidt is at center stage against the Caps, who left him unprotected and then tried to reacquire him from Vegas. Schmidt led the Golden Knights in ice time and surpassed his previous career highs with five goals and 31 assists. He is logging nearly 25 minutes per playoff game.

Summer heat hasn’t quite settled onto Las Vegas yet, but the upcoming week looks like a scorcher. The temperature on the Strip should hit 100 degrees on Wednesday before Game 2.

Caps on Top: Washington wins Stanley Cup, beats Vegas 4-3
Caps hold off Knights 3-2 in Game 2 of Cup Final
Stanley Cup Final: At a Glance
Capitals flying high, up 2-1 on Vegas in Stanley Cup Final
Preview: Defenders as important to Fleury as he is to Golden Knights
Event Calendar