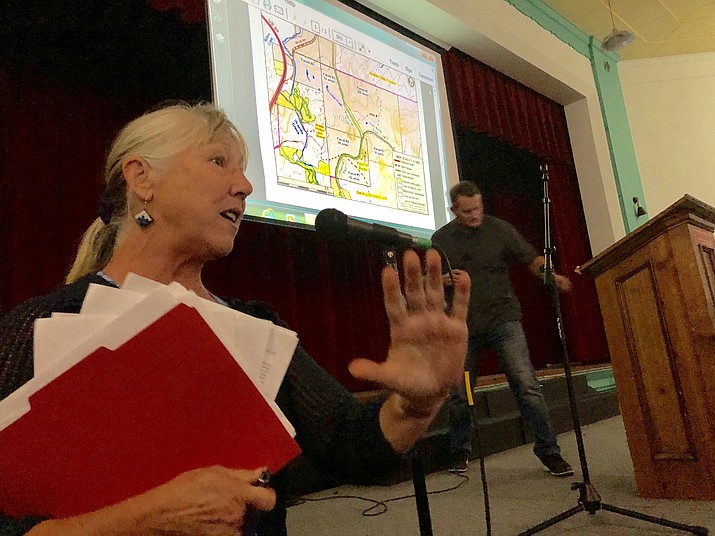 Area resident Joyce Van Walsum, left, urges Jason Gisi of Arizona Eco Development to be responsible in his pending development of the Granite Dells property near the Point of Rocks. Van Walsum was one of more than a dozen people who spoke during a public open house on the project Thursday, May 24. (Cindy Barks/Courier) 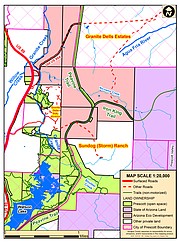 The singular nature of the Point of Rocks: It is one point that gets no argument in the ongoing dialogue on development in Prescott’s Granite Dells.

Former Prescott City Councilwoman and open space advocate Jean Wilcox refers to the Point of Rocks as “the crown jewel of the City of Prescott.”

Joe Trudeau, Southwest advocate for the Center for Biological Diversity and the chairman of the Save the Dells movement, calls the area “raw, beautiful, beloved land.”

And longtime Prescott wildlife biologist and educator Walt Anderson emphasizes the “special and priceless” wildlife found in the largely undeveloped land around the intersection of the Peavine Trail and the Iron King Trail.

What is up for debate, however, is how that land should be treated, as Gisi’s Arizona Eco Development company moves forward with its plans for as many as 3,300 homes on parcels north and south of the Granite Dells Parkway interchange on Highway 89A.

In a second open house on the project Thursday evening, May 24, members of the public again voiced their concerns about the pending development, and its possible impact on the area.

After a May 8 open house attracted about 400 people to Prescott City Hall, the May 24 meeting once again attracted hundreds — filling about half of the 900-seat auditorium at Mile High Middle School.

After Gisi gave a presentation on his plans, more than a dozen audience members lined up to speak — all voicing worries about the development.

“The AED (Arizona Eco Development) proposal as presented would irreparably damage this ecosystem,” Anderson said, referring to the rich wildlife scene along the Peavine and Iron King trails.

“What really makes the trails special and priceless is the life that we find there,” Anderson said, mentioning deer, bobcats, mountain lions, lizards, eagles and peregrine falcons.

Wilcox urged Gisi to be sensitive to the significant landmark. “It takes vision to fulfill (the) responsibility when you own a crown jewel, and the Point of Rocks is the crown jewel of Prescott,” she said.

A number of the speakers objected to the prospect of having homes crowding the Point of Rocks, and they appealed to Gisi to tone down the density of the project.

“Just because you can make a lot of money, should you?” asked area resident Joyce Van Walsum.

Others brought up concerns about water and traffic, and several pushed for preservation of a wildlife corridor through the property.

Gisi has yet to file his official annexation petition with the City of Prescott — a step that he says likely would occur within the next two weeks, and possibly this week.

The application will include a map and legal description of the project, Gisi said.

A master plan that would include significantly more detail will also be coming soon, and could be submitted concurrently with the annexation petition, he said.

The two open houses so far were voluntary meetings that Gisi conducted to get feedback from the public. The May 24 meeting was the final such event, he said.

After submittal of his official paperwork, Gisi says the official state and city requirements for annexations will begin. At a minimum, he said, five more “city-sanctioned” meetings will take place on the project — two by the Prescott and Zoning Commission, two by the City Council, and another public hearing during the required 60-day comment period. The city could also opt to add more meetings.

Prescott City Manager Michael Lamar said the city has been listening to the public feedback, but has so far not weighed in publicly.

“We’ve heard from the community loud and clear,” Lamar said Friday, May 25, of the public’s desire to preserve as much as possible of the Granite Dells’ unique features.

Although he declined to comment specifically on possible preservation measures until he sees Gisi’s official application, Lamar said the suggestions from the public “are all the kinds of things that are negotiating points.” Still, he said, “It’s really tough to comment on something we haven’t seen yet.”

Gisi said he expects the master plan to reflect some of what the public has requested. For instance, he said he has talked with the city about a public park at Granite Creek west of the Point of Rocks. The park would allow for closer access to the Peavine Trail, he said.

In addition, Gisi has talked about a “density transfer” that would preserve more open space around the Point of Rocks, in exchange for higher density on the relatively flat land to the north.

Even so, Gisi said the amount of open space likely would not reach the level that the Save the Dells movement is seeking.

Trudeau notes that the group, which now consists of about 2,000 members, is pushing for a “regional park” in the area around the Point of Rocks, south of the Iron King Trail. He envisions an open space area of about 500 acres at the location.

Trudeau maintains that would be a fairly small portion of Arizona Eco’s entire holdings in the area of about 15,000 acres.

“Three percent or less of their land is the area at the Granite Dells,” he said. (Only a portion of Arizona Eco’s holdings north of Highway 89A are included in the pending 3,000-acre-or-so annexation plans.)

Trudeau suggests that Arizona Eco focus much of its 25-percent open space requirement in the Dells area, with the northern tract near the Prescott Airport getting less open space, and more density.

Gisi says he understands the concerns about the Point of Rocks, and he plans to include a section of open space there. “But it would be more like 60 or 80 acres, and the (nearby) city park,” he said.

Overall, though, he said, “I am confident we will exceed the city minimum (of 25-percent open space) comfortably. Some of that, frankly, will be driven by drainage and topography, and some by the choices we make.”