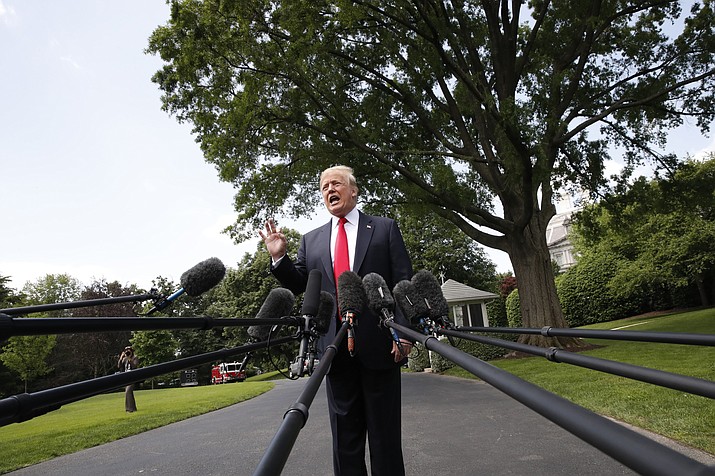 President Donald Trump speaks to the media on the South Lawn of the White House in Washington, Wednesday, May 23, 2018, en route to a day trip to New York. Trump will hold a roundtable discussion on Long Island on illegal immigration and gang violence that the White House is calling a "national call to action for legislative policy changes." (AP Photo/Jacquelyn Martin)

WASHINGTON (AP) — President Donald Trump has branded his latest attempt to discredit the special counsel's Russia investigation as "spygate," part of a newly invigorated strategy embraced by his Republican colleagues to raise suspicions about the probe that has dogged his presidency almost since the start.

Trump now is zeroing in on — and at times embellishing — reports that a longtime U.S. government informant approached members of his 2016 campaign during the presidential election in a possible bid to glean intelligence on Russian efforts to sway the election.

Trump's latest broadsides set the stage for an unusual decision by the White House to arrange access to classified documents for just two Republican House members, both Trump allies, in a briefing expected Thursday, as Trump and his supporters in Congress press for information on the outside informant.

It remains unclear what, if any, spying was done. The White House has given no evidence to support Trump's claim that that the Obama administration was trying to spy on his 2016 campaign for political reasons. It's long been known that the FBI was looking into Russian meddling during the campaign and that part of that inquiry touched on the Trump campaign's contacts with Russian figures.

Democrats say the briefing — held as special counsel Robert Mueller investigates Trump's campaign and whether it was involved in Russian meddling in the U.S. election — is highly inappropriate and should be given to a bipartisan group of congressional leaders, as is customary. Senate Democratic Leader Chuck Schumer and House Democratic Leader Nancy Pelosi wrote to the Justice Department on Wednesday and said the GOP-only meeting is "completely improper in its proposed form and would set a damaging precedent for your institutions and the rule of law."

Some Senate Republicans have asked to be invited to the meeting as well, saying they should be included. Senate Judiciary Chairman Chuck Grassley of Iowa, South Carolina Sen. Lindsey Graham and Texas Sen. John Cornyn made that request to White House Chief of Staff John Kelly on Tuesday. Cornyn is the No. 2 Republican in the Senate.

Nunes, an ardent Trump supporter, has been demanding information on an FBI source in the Russia investigation. And Trump took up the cause as the White House tries to combat the threat posed by Mueller's investigation.

Trump escalated his efforts to discredit that investigation Wednesday, saying the FBI has been caught in a "MAJOR spy scandal."

He tweeted: "Look how things have turned around on the Criminal Deep State. They go after Phony Collusion with Russia, a made up Scam, and end up getting caught in a major SPY scandal the likes of which this country may never have seen before! What goes around, comes around!"

Former FBI Director James Comey, who was fired by Trump last year, tweeted Wednesday morning that the agency's use of secret informants was "tightly regulated and essential to protecting the country."

"Attacks on the FBI and lying about its work will do lasting damage to our country," he said. "How will Republicans explain this to their grandchildren?

The back and forth between Congress and the Justice Department over the Nunes request — one of many over the course of the Russia investigation — has been simmering for weeks.

The department originally rejected Nunes' appeal, writing in a letter in late April that his request for information "regarding a specific individual" could have severe consequences, including potential loss of human life. Negotiations over the information stalled, but restarted when Trump demanded in a tweet Sunday that the Justice Department investigate "whether or not the FBI/DOJ infiltrated or surveilled the Trump Campaign for Political Purposes."

The Justice Department agreed by expanding an open, internal investigation to determine whether there was any politically motivated surveillance. And the White House said Kelly would organize the meeting with House lawmakers to review the documents, although he and other White House staffers would not be present.

White House press secretary Sarah Sanders said no Democrats were invited because they had not requested the information. In fact, Democrats have asked to be shown the classified material.

The New York Times was the first to report that the FBI had an informant who met several times with Trump campaign officials who had suspicious contacts linked to Russia. No evidence has emerged to show that Obama-era authorities placed an informant inside the Trump campaign.