To Your Good Health: False positive from mammogram provokes anxiety 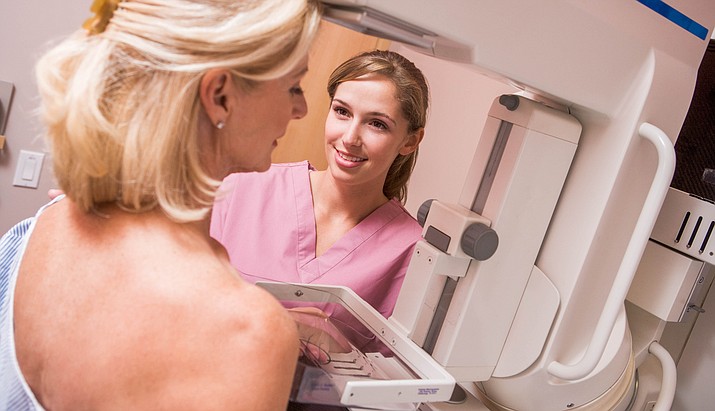 False positives are not unusual in mammogram results, and they can create a lot of anxiety for women and their loved ones, but temporary anxiety, during subsequent testing, should not outweigh the benefits mammograms offer for early detection -- and the greater possibility of a cure -- of potentially fatal breast cancer, according to Dr. Keith Roach.

DEAR DR. ROACH: I am a 42-year-old, completely healthy woman.

I recently went for my first mammogram. I had delayed it because I did not think I really needed a mammogram, despite being told I should start at 40.

After the initial screening mammogram, I was called back for additional mammogram pictures and two breast ultrasounds. During the process, I was told that I had a mass in my right breast that was suspicious for malignancy and a nearby abnormal lymph node. I was really scared for two weeks. I worried about how my small kids would deal with all my hair falling out after chemotherapy.

I eventually had stereotactic breast biopsies. The results: normal breast tissue. Great, except that I have to come back in six months “just in case.”

Mammography has turned this normal woman into a nervous wreck. I will go back in six months, but if it is all OK, I think I am going to skip it for a few years because I just can’t take much more of this. What do you think? — H.W.

ANSWER: I am glad you wrote. This is a part of screening that I see as a physician, but that is seldom discussed in the media.

A mammogram that requires additional evaluation but is ultimately proven to be not cancer is called a “false positive,” and these are common. It is estimated that in women who get annual mammography between ages 40 and 50 (this is from when that was the recommendation), about half will have a false positive. This is largely because women between 40 and 50 have a low risk of cancer (compared with older women) and because the denser breast tissue of young women is harder to evaluate.

In fact, for 40-year-old women who underwent screening mammograms, about two per 1,000 had invasive breast cancer (another two had ductal carcinoma in situ, which is a separate problem). For each breast cancer diagnosed, there were 464 mammograms and 10 biopsies, meaning that if a mammogram is so abnormal (as it was in your case) that a biopsy is needed, 90 percent of the time it will not be cancer. That’s a lot of women who go through a great deal of anxiety for what is ultimately no benefit.

It’s very difficult to make a decision about mammography for women in any age group, but in 40- to 50-year-old women, it is especially difficult. This is reflected by the differences in guidelines. The U.S. Preventive Services Task Force now says that there isn’t enough information to make a recommendation while the American Cancer Society recommends yearly mammograms beginning at age 45. Many other countries do not perform mammography at all between 40 and 50.

Breast cancer becomes more common between the ages of 50 and 74, and the ability of the mammograms to find cancer improves, so even though there is still some controversy, most experts agree that the benefits outweigh risks in that age group.

However, it is still important to recognize that a period of time (two weeks, in your case) of significant anxiety is not uncommon. Balancing a small but significant risk of anxiety against a smaller, but still real potential for early detection and cure from potentially fatal breast cancer is not easy to do, but most women who hear both the risks and benefits choose to accept the risk. I hope knowing a bit more about it makes it easier to get through the anxiety of a positive mammogram.

Dr. Roach regrets that he is unable to answer individual letters, but will incorporate them in the column whenever possible. Readers may email questions to ToYourGoodHealth@med.cornell.edu or request an order form of available health newsletters at 628 Virginia Dr., Orlando, FL 32803. Health newsletters may also be ordered from www.rbmamall.com.