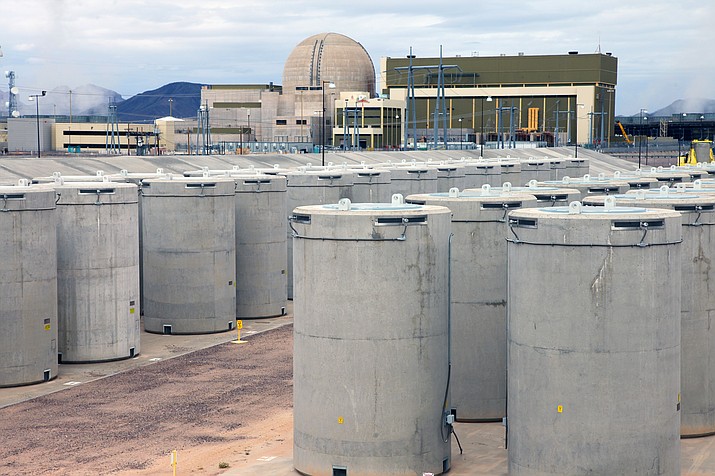 This file photo from 2015 pictures a football-field-sized storage facility on the grounds of Palo Verde Nuclear Generating Station, where 144 20-foot tall concrete casks contain the station’s spent fuel rods. The casks require no power, but are monitored continuously. (APS/Courtesy)

The Palo Verde Nuclear Generating Station is the nation’s largest power producer, serving 4 million people across the Southwest and providing about 35 percent of Arizona’s electric power, according to the U.S. Energy Information Administration.

If the Clean Energy for a Healthy Arizona initiative appears on the ballot in November, voters will decide the plant’s future. The initiative calls for 50 percent of Arizona’s electrical energy to come from renewable sources, mostly solar and wind, by 2030. Nuclear power would be hit hardest among sources of power in Arizona, because Palo Verde - the nation’s largest power producer - could not operate at levels low enough to satisfy the initiative’s requirements. Supporters have less than two months to gather enough signatures to qualify.

In this file photo from Oct 23, 2017, Yavapai County District Supervisor Jack Smith (third from the right in the second row) stands with other visitors who toured Arizona’s Palo Verde Nuclear Generating Station that day. (APS/Courtesy)

At a news media tour of the plant in April, reporters donned head-to-toe protective gear to guard against radiation before entering one of Palo Verde’s three nuclear-containment buildings. The reactor was undergoing refueling, a process that repeats every 18 months.

Inside the sweltering concrete dome, a central pool containing the nuclear reactor gave off a bluish tinge. The jumpsuit-clad refueling crew sat aboard a metal contraption moving slowly above the pool, dragging fuel assemblies - rectangular stacks of pallets containing uranium - by a rope through the water.

Every six months, one of the containment buildings goes through a monthlong refueling process. Palo Verde plans these outages for the fall and spring, when Arizona and Southern California need the least electricity for heating and cooling, spokesman Alan Bunnell said. Turning the reactor on and off isn’t as easy as pressing a button - it involves weeks of preparation.

That’s one of the reasons the plant would have to shut down completely if the ballot initiative passes, said Jack Cadogan, senior vice president of site operations. Solar energy sources would generate so much power during the day in Arizona that there wouldn’t be enough room on the grid for nuclear.

“We would have to shut Palo Verde down during the day every day,” Cadogan said. “But that’s not how nuclear plants really work. Nuclear plants can’t just be shut down and then started up again.”

California has a similar problem, he said. Its solar energy sources produce so much excess electricity that it pays Arizona to take the excess power. But if Arizona must switch to 50 percent renewables, it no longer will be able to take California’s extra power. That means both states probably will have to spend billions developing technology to store solar energy, he said.

“The only reason (California’s) electric bills are not double of ours, I think, is because they have not tackled the storage issue,” Cadogan said. “But this mandate would force us all to tackle it all at once. And there’s going to be a lot of customers that are going to be hurt, especially lower income customers.”

Rodd McLeod, a spokesman for the Clean Energy Initiative, took issue with APS’ assertion that the requirements of the initiative would force them to close the plant. He was skeptical about APS’ argument that Palo Verde would no longer be economically viable, since utilities from other states own part of the plant.

“If the Palo Verde plant closes, it’s going to be because APS decides to close it,” McLeod said.

Supporters of the initiative, including Sandy Bahr of the Sierra Club’s Grand Canyon chapter, argue that the long-term benefits outweigh the immediate costs.

“Here in Arizona, solar is a great resource that we have that we should be utilizing more of,” Bahr said. “And I think the public gets that, the voters get that, and they’re very supportive of it. That’s why the utilities are trying so hard to create confusion and to create fear and try and undermine it.”

For the initiative’s backers, though, that’s not enough.

“From the perspective of someone who wants clean, sustainable, renewable energy, nuclear power doesn’t cut it,” Bahr said.

Supporters of the Clean Energy initiative must get nearly 226,000 signatures by July 5 to get it on the November ballot. Backers include the Arizona Asthma Coalition and the Natural Resources Defense Council.

Future of Arizona nuclear plant may see hydrogen production
Generating a third of Prescott’s electricity around the clock
Column: Landmark performance makes Palo Verde a treasure for all Arizonans
Arizona's biggest utility vows all clean power by 2050
Talk of the Town: Keeping on the right clean energy course for Arizona