Ride your bike to work with the mayor
Also, a look at Arizona bicycle laws 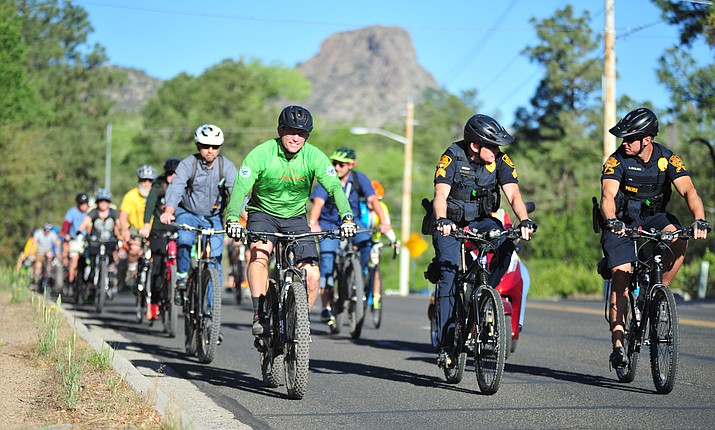 Prescott Mayor Greg Mengarelli leads a group of about 50 bicyclists down Gurley Street in the city’s annual Bike to Work with the Mayor ride Friday, May 18, 2018 in Prescott. (Les Stukenberg/Courier)

Prescott Mayor Greg Mengarelli led a group of about 50 bicyclists down Gurley Street in the city’s annual Bike to Work with the Mayor ride Friday, May 18, 2018, in Prescott.

A Look at Arizona Bicycle Laws

According to Arizona State law, cyclists have the very same rights and responsibilities as motorists.

ARS 28-721 - Any vehicle moving slower than the normal traffic speed shall drive in the right-hand lane, or “as close as practicable” to the right edge of the road, except when preparing to turn left or when passing

You may ride far enough from the road edge to stay clear of surface debris, potholes, rough pavement, drain grates, and pavement joints, as well as to avoid pedestrians, dogs, parked vehicles, and other objects.

You may occupy any part of a lane when your safety warrants it. Never compromise your safety for the convenience of a motorist behind you.

Laws for Bicycle Riders Only

ARS 28-815 You may ride no more than two side-by-side, except on exclusive bike paths

ARS 28-814 You may not attach your bicycle to, or hold onto, another vehicle on the roadway

Most crashes between motorists and cyclists happen at intersections. Most often, when the motorist is at fault, it is because they failed to yield the right-of-way to the cyclist. This usually happens when you turn left in front of a cyclist, or pull out from a stop sign or driveway into a cyclist’s path.

Talk of the Town: Lack of bike lanes makes safety trickier
Letter: Give bike riders benefit of the doubt
Bicyclists, motorists go by same rules
BIKE PRESCOTT: What’s with all the Spandex?
Talk of the Town: Drivers, cyclists must obey rules