How termites destroy from the inside out 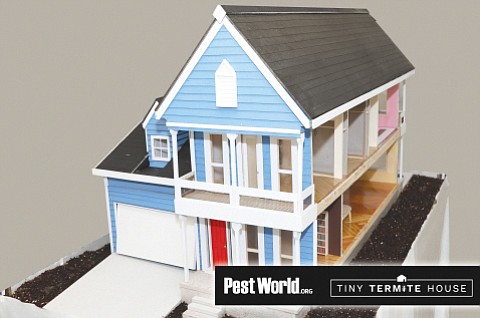 Entomologists planted a half million termites in the soil around this model home to research termite destruction. (National Pest Management Association/Courtesy)

FAIRFAX, Va. (AP) — The Tiny Termite House, a first-of-its-kind study and video production by the National Pest Management Association, NPMA, has revealed, like never before, the destructive nature of termites.

A few months ago, more than half a million voracious termites were introduced into the soil surrounding a tiny, built-to-scale home. A team of researchers then began documenting and observing their behaviors and the incredible damage they leave in their wake.

The Tiny Termite House demonstrates how quickly and methodically termites can eat away at a structure if they are left unchecked. While hidden from view, termites can consume a structure’s critical support beams.

“On the surface, the house appeared to be in good shape,” said Jim Fredericks, Ph.D., chief entomologist for the NPMA. “We had some visual clues of mud tubes forming; however, it was what was happening inside the walls and under the floors that showed the real story. This termite colony got right to work, turning this dream home into a danger zone.

“We were surprised to see that the termites acted much like they would in a true-to-size home, finding vulnerabilities in the structure and quickly began making their way up from sub-flooring and joists and into the walls,” he said.

Although it was a small model home, the termites behaved and attacked the house in the same way that they destroy life-size homes every day — with barely any noticeable damage to the exterior and only minor signs of destruction throughout the home itself. Hence, their nickname, “silent destroyers.”

The researchers provided a source of moisture for the more-than-500,000 subterranean termites that surrounded the home in the soil and monitored the house to see how far the pests would go and how much destruction they would cause. The researchers immediately found the structural weaknesses of the foundation, infiltrating cracks in the cement and the easy access points the termites found at the corners of the home, where the wood came together.

The first trace of damage that was spotted was the mud tubes, pathways that termites construct to reach their food source. Once their mud tubes were formed, the termites tarted eating the wood joists and plywood hen moved on to the drywall.

During the final tour of the home, researchers found that practically all the floor and wall joists had been completely eaten away. The once-pristine hardwood floors started to buckle, and the structure of the house was a total loss.

“We were amazed when we lifted the sub flooring from the cement slab at the foundation of the home — there were hundreds of thousands of termites living underneath it,” said Fredericks. “If we would have let the termites go for an extended period of time, we expect that the whole house would’ve began to crumble and eventually collapse before our eyes.”

Termites are one of the most destructive insect species to affect homeowners, causing more than $5 billion in property damage in the United States every year, and that cost is typically not covered by home insurance policies.

“These costly critters are out in full force during the warmer months and given the eye-opening results of the Tiny Termite House, it’s important for homeowners to work with a licensed pest control professional to proactively check for termites on an annual basis,” said Fredericks.