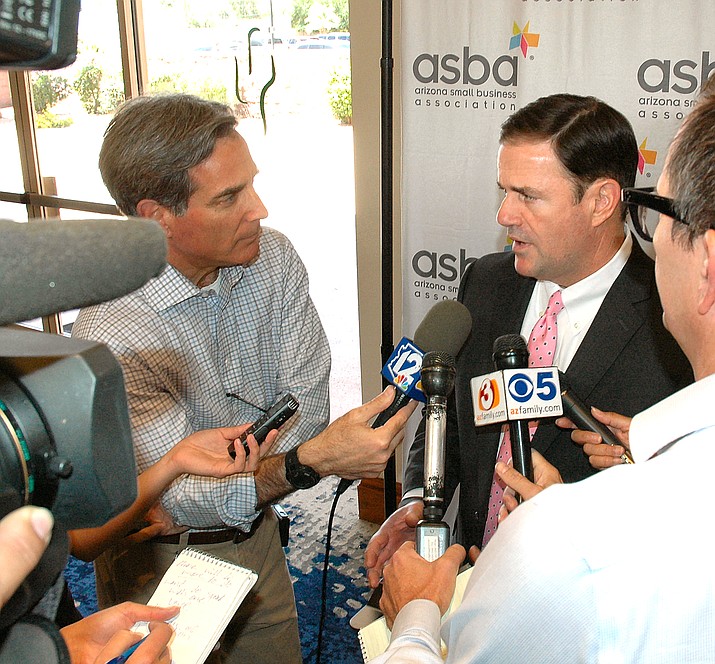 Gov. Doug Ducey answers questions Tuesday, May 15, about his ideas for allowing wagering on sporting events in Arizona, including where people should be able to place their bets. (Howard Fischer/Courtesy)

SCOTTSDALE — Gov. Doug Ducey is open to the idea of allowing Arizonans to place bets on sporting events at 55 off-track betting (OTB) sites around the state.

The governor said Tuesday, May 15 he wants to “maintain the culture and flavor of our state’’ in deciding who should get the right to offer wagering on professional and amateur sports. And historically, casino gaming has been limited to tribal lands, a finding cemented into state law by voters in 2002.

But Ducey said he’s looking for what could be the best deal for the state — and generate the most money. And that, he said, could mean changes.

“The world’s changed tremendously since the year 2000,’’ the governor said. “We have the internet online availability.’’

And what most recently changed was the Monday ruling by the U.S. Supreme Court that voided federal laws, which until now have precluded Arizona and most other states from allowing residents to place bets on sporting events.

“There’s a lot of opportunity here,’’ Ducey said. “But I think it’s something that we want to think through.’’

But the governor said it would be wrong to presume that whatever new revenues sports gaming brings into the state, whether through revenue sharing with the tribes or a share of the handle at tracks and OTB sites, will end up being earmarked for education. The governor said while he looks at funding needs for education; he also has to be concerned with funding

“There’s a long, long list of funding needs in this state that I’m aware of,’’ Ducey said.

“I do think there’s a significant opportunity with gaming,’’ he continued. “But I do think we should have the public discourse and debate on where those dollars will be spent and where the highest priority is.’’

The governor’s musings come as several Native American tribes already are expressing interest in revamping their agreements with the state to also allow them to offer sports wagering.

“Of course, we have the tribal gaming compact,’’ Ducey said.

“And of course we want to respect that and make sure we’re properly communicating with the tribes,’’ the governor continued. “But there’s also other factors we want to take into account.’’

One of those is that there already is sports gaming of a sort in Arizona.

That’s not just horse racing at Turf Paradise in Phoenix. There also are 55 OTB sites scattered throughout the state where Arizonans can place bets not only on the ponies racing in Phoenix but on horse and dog-racing throughout the country.

Vince Francia, general manager of the horse track, which also runs most of those OTB sites, wants “in’’ on any deal.

Francia said he would not expect Ducey and state lawmakers to limit sports wagering to the track.

“The word ‘exclusive’ has never entered our thought process on this,’’ he said.

And such a move would raise all sorts of legal issues, including a “poison pill’’ provision in the agreements the state has with tribes that would void the compacts — and the revenues they now share with the state from other casino operations — if the state were to offer a new form of off-reservation gaming without their consent.

But Francia said when Ducey amends those compacts to let the tribes take bets on sporting events, there also could be a provision giving that same right to the tracks and the OTB sites.

Francia also is counting on that same change in public attitudes towards gaming — both on and off the reservation — that Ducey sees.

The 2002 measure to give tribes the exclusive right to operate casino games was approved by a margin of 610,900 in favor against 590,054 opposed.

But that was not the only measure on the ballot. Another one being pushed by the racing industry would have given them a share of new gaming devices.

That, however, gathered just 234,935 votes versus 947,341 against. Jane Hull, who was governor at the time -- and backed the tribal proposal -- said at the time that showed that Arizonans want casino-style gaming confined to reservations.

“I believe attitudes have changed since,’’ Francia said Tuesday.

Ducey gave all indications he’s willing to listen to what the track has to offer.

“We want to build out the stakeholder group, look at some best practices around the country, and see how we can maximize this for the citizens of Arizona and for the general fund,’’ he said. “I do think there is a real opportunity here.’’