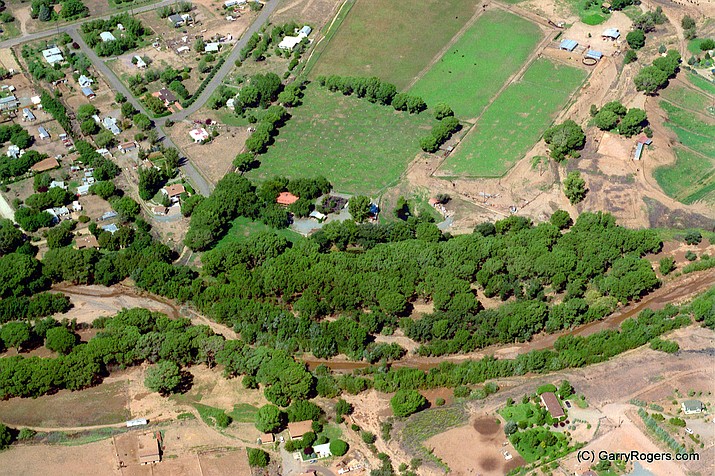 Garry Rogers is donating his 20-acre property as a conservation easement in Dewey-Humboldt. (Courtesy)

It was 21 years ago that Garry and Denise Rogers purchased about 16 acres near the Agua Fria River in Dewey-Humboldt. Ten years ago, they added almost 3 acres adjacent to the original property for a total of 19.5 acres. They named it Coldwater Farm.

In addition to a house and a barn, the land includes three large ponds, mature cottonwood and willow trees, and a lush section of the river. Visitors in the past had suggested preserving the land in some way, and Garry Rogers looked into donating the property by way of a conservation easement through the Central Arizona Land Trust (CALT).

Conservation easements protect the land while allowing the owners to continue living on the property. The Rogers retain the right to sell the land or pass it on to their heirs, but no one can build on it. The easement remains with the land in perpetuity. The have two living children, nine grandchildren, and 19 great-grandchildren.

This has cut the value of his property by 50 percent, Rogers said during a presentation before the Dewey-Humboldt Open Space and Trails Committee May 2. He showed photographs of the property and explained why wildlife, birds, soil and vegetation are important to everyone’s survival.

An author of several reference books and a children’s series, the Rogers started counting bird species they spotted on the property; the list has reached 129 species, two of which are on the federal Threatened and Endangered Species list.

The yellow-billed cuckoo and the southwest willow flycatcher use the riparian areas of Coldwater Farm for breeding, according to surveys by the Audubon Society, Arizona Game and Fish Department, and the U.S. Fish and Wildlife Service. These two bird species are considered neotropical migrants, said Asa Bjorklund, CALT consultant.

“We’re lucky. There are 20 animal species that you couldn’t see other places,” Garry Rogers said, listing nocturnal animals such as foxes, skunks, racoons, and javelina. About nine deer visit the property regularly, and a number of fawns have been born there.

In addition, Dewey-Humboldt history illustrates the mining and agricultural dependency on the Agua Fria, she said.

The river continues through Black Canyon and on to Lake Pleasant, created by the construction of Waddell Dam in 1927 to supply water to homes in northwest Phoenix. The river and canals continue from Lake Pleasant to the Phoenix area where they connect with the Gila River.”

The Agua Fria is a perennial river — it has not been dry for 60 years, Rogers said. The three ponds are spring fed, and support fish, turtles, the Rocky Mountain toad, and other wildlife. He’s had no problem with mosquitoes because the

toads and bats take care of the insects.

Students at the nearby Humboldt Elementary School planted many varieties of milkweed, the food of choice for swallowtail butterflies which migrate across the area. Rogers has also seen Blue Heron — they keep the gopher population down — double-breasted cormorant, bald eagles, and red-tailed hawks.

“We have 20 species of hawks that visit the farm. They depend on gophers and wood rats,” he said.

CALT launched a fundraising campaign, “It’s for the Birds,” on May 12 in celebration of the World Migratory Bird Day. Tax-deductible gifts will be used to meet the fundraising goal of $65,000 by Dec. 31, 2018. The funds are held in trust with the Arizona Community Foundation.

Local chapters of conservation groups, including the Prescott Audubon Society, the Highlands Center for Natural History, the Citizen Water Advisory Group, the Sierra Club-Yavapai Group, and the Arizona Native Plant Society-Prescott Chapter, have stepped up early to voice their support for the long-term protection of Coldwater Farm.