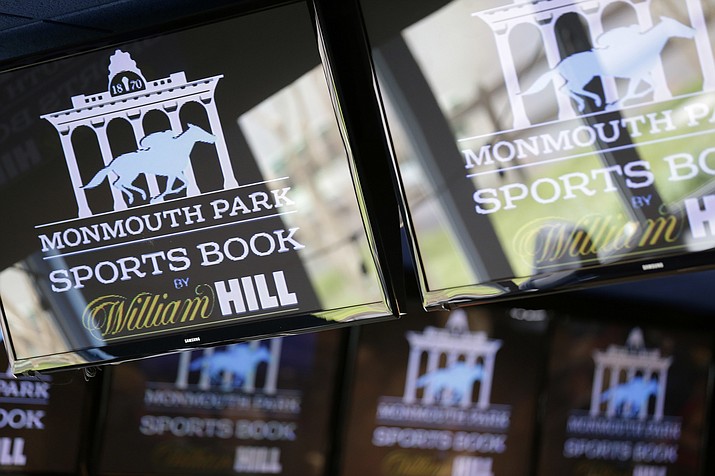 Signs for Monmouth Park are displayed in a bar at the racetrack in Oceanport, N.J., Monday, May 14, 2018. The Supreme Court on Monday gave its go-ahead for states to allow gambling on sports across the nation, striking down a federal law that barred betting on football, basketball, baseball and other sports in most states. (AP Photo/Seth Wenig)

PHOENIX — A new ruling Monday by the U.S. Supreme Court could open the door to Arizonans legally betting for — or against — the Diamondbacks, the Cardinals and even the Wildcats, Sun Devils and Lumberjacks.

And it could mean more money for the state.

In a 6-3 decision the justices struck down a 1992 federal law, which dictated that most states cannot allow such wagering. The majority concluded that the Professional and Amateur Sports Protection Act (PASPA) is an unconstitutional move by Congress to tell states what they can and cannot legalize.

“This is positive news,’’ said Gov. Doug Ducey on hearing the court struck down the law that until now has prohibited most states from authorizing their residents to place legal bets on the outcome of professional and amateur sports.

The majority concluded that Congress is free to outlaw sports betting under federal law on its own. But what it cannot do, the justices said, is tell states what they can and cannot make legal under their own statutes.

In some ways, the timing of the ruling could not be better.

It comes as Ducey already is negotiating with tribes to “modernize’’ the gaming compacts that voters authorized in 2002. These give the tribes the exclusive right to operate certain forms of casino gambling in exchange for the state getting a share of the profits.

Those compacts begin to expire after 2022. And Ducey has made no secret he thinks there’s a better deal to be had, with the state getting more cash.

“This ruling gives Arizona options that could benefit out citizens and our general fund,’’ the governor said.

Press aide Daniel Scarpinato said that specifically includes a possible trade-off: The tribes would get the exclusive right to take bets on sports and the state would reap a bigger share of the overall take.

And Ducey, for his part, has not been averse to the idea of expanded gaming to help balance the budget. In fact, his original proposal to fund teacher raises included allowing the Arizona Lottery to start a keno game, a plan that was subsequently scrapped.

Odds are the tribes see opportunities, too.

“I think the Navajo Nation is very interested in sports betting and in finding ways to expand their casino offerings,’’ said attorney Steven Hart, who represents the state’s largest tribe.

“We are looking forward to discussing with the state how we can go about working together on developing this opportunity, which could be a win-win for the state of Arizona and Arizona tribes,’’ he said in a prepared statement.

But not everyone thinks that if there is to be wagering on sports that the exclusive rights should go to the tribes.

“I don’t know why we would be left out,’’ said Vince Francia, general manager of Turf Paradise who said there’s no reason to exclude the tracks. "We already bet on horse racing, which is one sport.’’

Arizona Attorney General Mark Brnovich, who had sided with New Jersey in its challenge of the federal law, called Monday’s ruling a significant victory for states’ rights.

“What Congress did when they passed PASPA, they created unconstitutional law,’’ he said. “And I’m glad the Supreme Court struck it down.’’

Nothing in Monday’s ruling changes anything.

Sports betting remains a violation of state law. And the voter-approved compacts with the tribes limit the kinds of gaming that can take place at their casinos.

But what the ruling does is open the door to changes.

Brnovich said that is a decision for the governor and lawmakers. But Brnovich, a former state gaming director and federal prosecutor, said he is not terribly concerned that a change in Arizona law would lead to a massive increase in sports gambling.

“The reality is, it’s already going on,’’ Brnovich said. “We know during last year’s NCAA basketball tournament, so-called ‘March Madness,’ that of the money that was wagered, only about 3 percent of it was legally wagered,’’ that being in Nevada which had an exception under the federal law.

The American Gaming Association produced a similar statistic for this year’s Super Bowl, saying that 97 percent of total wagers, equaling more than $4.6 billion, was expected to be bet illegally.

But Maricopa County Attorney Bill Montgomery is taking a more cautious approach to what lawmakers should do now.

“Arizona gaming policy to this point has been measured, regardless of the now-defunct federal legislation,’’ he said.

And Montgomery warned against seeing Monday’s ruling as an easy way to generate more cash for the state budget.

“Without PASPA, Arizona should not rush into further gaming opportunities as a quick revenue generator,’’ he said. “Calculating costs requires careful review in order to fully weigh policy options.’’

One factor behind the federal law was the claims by professional and amateur sports leagues that legalized wagering on the outcome of games will lead to a greater prospect of cheating. That includes players or coaches being paid to “shave’’ points to, if not lose the game, win by a smaller margin than is the point-spread line on wagering.

But Brnovich said that ignores the fact that billions of dollars already are being wagered, albeit illegally.

“So if someone’s going to compromise the integrity of an athletic contest, they, quite frankly, can already do that,’’ Brnovich said.

Conversely, he said, there may be benefits to having more of the sports wagering done through legitimate outlets.

“The reality is, you bring up the point shaving scandal from the 1990s, that was uncovered as a result of the legal sports books in Las Vegas noticing aberrations in betting patterns,’’ Brnovich said.

“You could make a strong argument, I think, that if it’s regulated and people are on top of it, whether it’s the professional gamblers or it’s the professional sports books, that they will be able to detect anomalies and irregular betting patterns much better than some rookie in a back alley who has ties to organized crime,’’ he said.