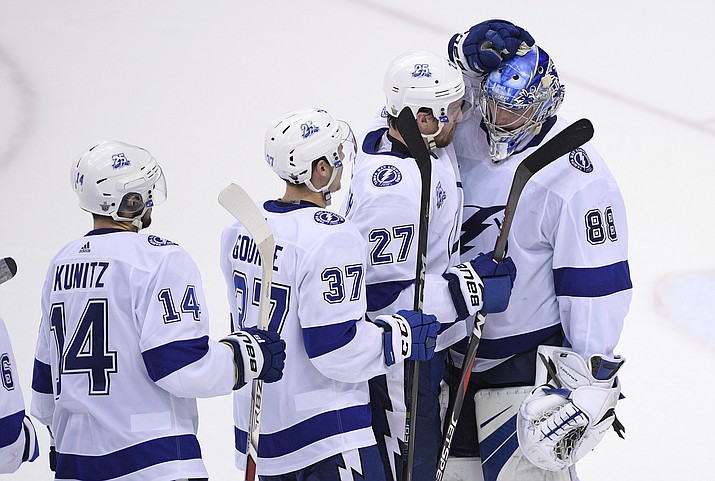 WASHINGTON (AP) — Victor Hedman figured all the Tampa Bay Lightning needed to get back on track was a shift in momentum.

The big defenseman took it upon himself to provide it.

Hedman scored his first goal of the playoffs and added two assists, and Andrei Vasilevskiy stopped 36 of 38 shots to help the Lightning beat the Washington Capitals 4-2 in Game 3 of the Eastern Conference final Tuesday night and cut their series deficit to 2-1. Hedman had the primary assist on power-play goals by Steven Stamkos and Nikita Kucherov and was a key part of three big penalty kills for Tampa Bay.

"I'm put in a position to produce, and I put that pressure on myself to do it," said Hedman, who has a goal and 10 assists during an eight-game point streak. "For me, it's about being effective at all ends of the ice and trying to be a difference-maker every time I step on it."

Hedman was dominant all over the ice as Tampa Bay looked like an entirely different team than the one that lost the first two games of the series at home and now has a chance to tie it in Game 4 on Thursday. The Norris Trophy finalist who played a team-high 25:08 was most proud of successful penalty kills.

"He's a perennial Norris guy," Stamkos said of Hedman. "We can't describe how good he is out there. We rely on him a ton, he's a horse and most nights if he's going well, we're going well as a team. Another big effort for him tonight, and you could see we all followed suit."

It wasn't perfect, but it was a more complete effort from Tampa Bay, which jumped out to a 3-0 lead before Brett Connolly answered for Washington in the second. Brayden Point's goal less than five minutes later allowed the Atlantic Division champions to play with a comfortable lead that survived Evgeny Kuznetsov's 6-on-5 goal with 3:02 remaining.

Vasilevskiy was a big part of holding on to the lead as he made seven saves on the penalty kill as part of a bounce-back performance after being criticized for his play earlier in the series. It wasn't perfect, but the Lightning began to make it up to Vasilevskiy for hanging him out to dry on so many odd-man rushes in Games 1 and 2 by improving their defensive-zone play.

"We always feel like we owe him," defenseman Anton Stralman said. "He's our best player. He's always there, he's always there for us and tonight we did a good job in front of him. I think that gives him some confidence, too, that he knows we're on and that's the way it should be."

The Capitals outshot the Lightning 38-23 but didn't help goaltender Braden Holtby with six minor penalties. Holtby allowed four goals but was helpless on the one-timers on the power play by Stamkos and Kucherov — the 10th and 11th Tampa Bay power-play goals over a streak of seven games with at least one.

"We know both teams have pretty good special teams, and if we're going to play like that, they're going to use it," said Capitals captain Alex Ovechkin, who combined with Kuznetsov to put 21 shots on net. "Obviously, you can see we didn't score, they scored."

Tampa Bay got two injury scares in the third period when Stamkos hobbled off after taking a slap shot from teammate Braydon Coburn in the right knee and Tyler Johnson was cross-checked by Michal Kempny. Each returned minutes later.

Sporting an ice pack on his right knee, Stamkos said it was just a stinger and that he was fine. He wants the Lightning to be feeling better but not too good still down 2-1.

"We haven't done anything yet," Stamkos said. "The goal is to win a championship, but you can't look too far ahead. We've made it a series."