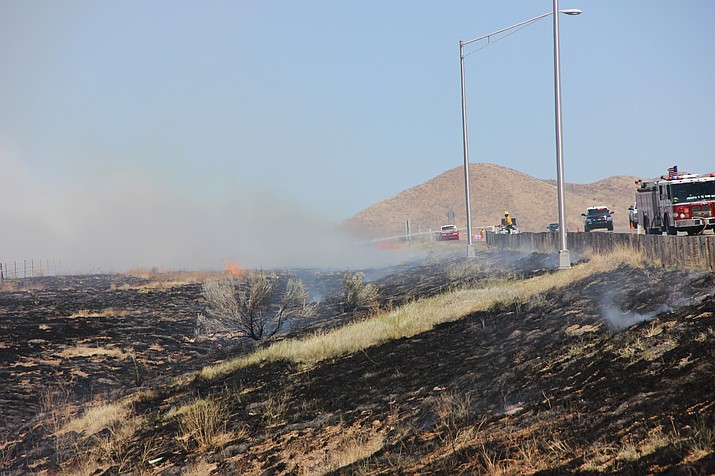 Editor's note: This story has been updated from an earlier version

A wildland fire along Fain Road in Prescott Valley was declared contained as of 1 p.m., Monday, May 14. The blaze charred about 54 acres of grassland south of Fain Road before crews were able to stop its progression and begin mopping it up.

“Mop up is when crews go around and ensure there’s a line around the fire and that all hotspots that would have the possibility of rekindling are cold,” said Central Arizona Fire and Medical Authority (CAFMA) Fire Marshall Rick Chase.

The initial report of the fire came in shortly after 10:30 a.m. The reporting party told dispatchers there was a roadside fire near the intersection of Fain Road and Lakeshore Drive.

Fortunately, the fire started far enough from any homes that only grassland was burned.

“There were no immediate structures threatened, but if the fire continued moving, the neighborhoods to the west would have been at risk,” Chase said.

Because of the high winds, Chase said firefighter crews will likely be on the scene mopping up for quite a while.

While it's currently undetermined what started the fire, it is believed to be human caused, Chase said.

"We still don't know for sure whether it was a chain dragging, a cigarette or what, but it was right off the side of the road," Chase said.