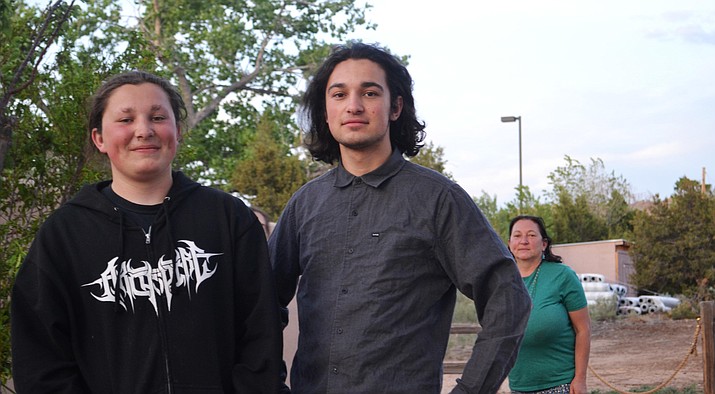 Lloyd Gray, left, and Thomas Gray stand together near Santa Fe, N.M., on Friday, May 11, as their mother, Lorraine Gray, looks on from the background. (AP Photo/Mary Hudetz)

ALBUQUERQUE, N.M. — The teenage brothers — both shy and Native American — had just entered a recreation center on a tour of their dream university when a parent in the group stepped away to call 911.

“Their behavior is just really odd,” she said from the Colorado State University campus. “They won’t give their names ... They just really stand out.”

The teens’ quiet disposition and dark clothing were unnerving, the caller told the dispatcher. Campus police responded by pulling them from the tour, patting them down and asking why they didn’t “cooperate” when others asked them questions.

Yet for many Native Americans, much of 17-year-old Lloyd Skanahwati and 19-year-old Thomas Kanewakeron Gray’s reserved conduct followed cultural norms often expected of youth — especially those taught in their schools and communities to be humble, as well as thoughtful about how and when to draw attention to themselves.

“Students who are quieter are taking information and processing it and thinking about information before they speak,” said Megan Red Shirt-Shaw, who is Oglala Lakota and a counselor for high school students at the Albuquerque Academy. “That shouldn’t be an indicator that a student isn’t fully engaged in the process.”

The teens’ April 30 encounter with police has been met with shock and outrage nationwide, as one of numerous examples of racial profiling to make headlines in recent weeks. At Yale University, a white student called campus police last week about a black graduate student sleeping in a residential common area. The graduate student fell asleep while working on a paper.

In the Gray brothers’ case, the discomforting interrogation also highlighted the complicated cultural circumstances Native Americans often must navigate in mainstream settings. That includes universities where they are likely to encounter students, professors and parents unaware of tribal value systems and how they differ from their own.

In some tribes, for example, it’s considered a sign of respect when youth avoid eye contact with adults during conversation, while non-Native Americans may interpret such conduct as dismissive. Listening also can be of greater value than talking in Native American communities.

“It’s not uncommon to have the students being really intent on listening to somebody as a means of learning and means of respect,” said Kara Bobroff, who is Navajo and Lakota, and founded the Native American Community Academy, a charter school in Albuquerque. “It’s not a value to put yourself out in front of everybody, necessarily. It doesn’t need to happen to define success.”

On campuses, Native Americans typically make up a sliver of the student body. They comprise 1 percent of U.S. college students. Once enrolled in a four-year institution, fewer than half finish, according to a 2016 report by the National Center for Education Statistics.

It’s incumbent on higher education institutions to take responsibility for improving those numbers, Bobroff said. The isolating experience of campus life — from admission tours to graduation — is eased when schools plan a welcoming environment, taking into account the communities and cultures students call home, she said.

“They might be stepping onto a campus where they are going to be one of the only Native students,” Bobroff said. “So trying to build a strong community around them is really important from the moment they interact with that school.”

Her charter school takes measures to prepare students for life after graduation, including sending faculty members to accompany groups of students on campus tours, she said. Afterward, they debrief.

The Gray brothers were alone on their Colorado State tour in Fort Collins, which is a seven-hour drive from their home in Santa Cruz, New Mexico.

Since they arrived late, they hadn’t been a part of an initial group introduction. But the older teen still introduced himself and his brother to the guide during a stop in the library, he said.

Their mother said Fort Collins was the farthest they had traveled together from home on their own, and they had saved money for the trip. They also registered in advance for the tour.

Police required the teens to provide an email confirmation from the university as proof they signed up before releasing them.

The brothers are Mohawk. Originally from upstate New York, they recalled attending cultural gatherings in which as children they kept quiet out of respect. Those experiences continue to influence how they conduct and carry themselves, especially while participating in an organized activity, they said.

The younger brother is now a high school senior at Santa Fe Indian School, a boarding school owned by the 19 Pueblo tribes. The older teen, who graduated from there two years ago, attends Northern New Mexico College. He talked for months about transferring to Colorado State, their mother, Lorraine Gray, said.

One officer told her on the phone that perhaps the experience would teach her sons to speak up for themselves, she said.

The extent to which the brothers seemed to have been penalized for their shyness stood out for Roy Taylor, who is Pawnee and whose son was graduating Sunday from Pomona College in California. However, the caller’s initial curiosity and discomfort with their presence was less surprising, said Taylor, of Minneapolis.

He recalled he and his son encountered parents who peppered them with questions about their backgrounds while touring colleges.

“It was disconcerting at times and felt intrusive, but nothing of the scale of this woman’s intrusions,” he said. “I think sometimes those parents they believe that’s their way of being friendly. But it doesn’t come across that way.”

Police have not identified the 911 caller, except to say she was 45 years old and white. In the call, she acknowledged she might be “completely paranoid” about the teens, whom she guessed were Hispanic. She said they were disinterested and evasive.

She said their clothing had “weird symbolism or wording,” which turned out to represent metal bands they follow.

Colorado State has offered to compensate them for their trip, calling their experience “sad and frustrating.” The Grays haven’t responded. The American Civil Liberties Union said it has been in conversation with the family as it decides how to proceed.

The university is taking steps to avoid similar incidents. It will provide badges to tour participants and require police to alert guides if they need to approach someone.

Admissions tours are often students’ first introduction to a school and help them decide whether it’s the right environment, said Red Shirt-Shaw, a former undergraduate admissions officer at the University of Pennsylvania.

First impressions can be crucial, given college’s low enrollment rates among Native Americans. At Colorado State, for example, only 125 students identified as Native American out of 33,400 students enrolled last fall, according to school statistics.

Red Shirt-Shaw said she was concerned the Grays’ encounter would discourage others from going on tours and to college.

“It’s appalling to me that somebody else — that a parent of a child — believed they knew who on the tour was or wasn’t the right looking fit for the university,” she said.