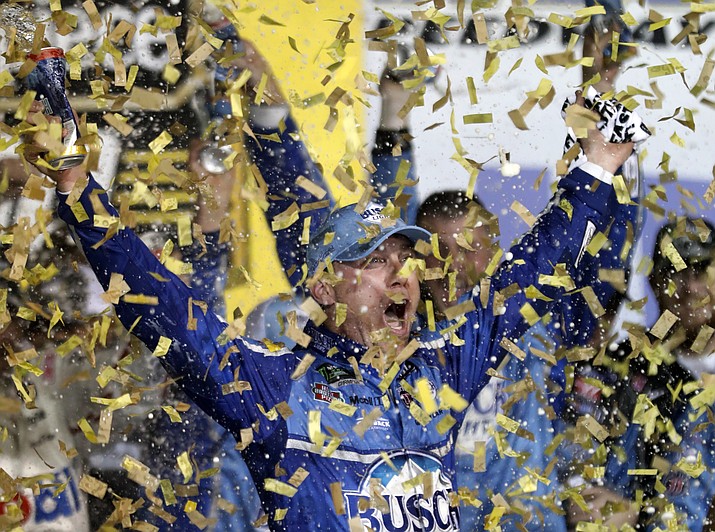 KANSAS CITY, Kan. — Nobody has been able to keep pace with Kevin Harvick this season.

Not even the reigning series champion on a track where he swept both races last season.

Harvick surged past Martin Truex Jr. with one lap to go Saturday night at Kansas Speedway, winning for the fifth time in what has turned out to be a record-setting start to the year. His total matches a career high for Harvick, who still has 24 chances to win a few more Monster Energy Cup Series races.

Nobody had ever won five of the first 12 races in NASCAR’s top series.

“Man, that was wild the last few laps,” said Harvick, who deftly dodged a couple late-race cautions, then used four fresh tires to roar to the front on the final restart with 10 laps remaining.

“That was so fun,” he said, “hearing those fans screaming and yelling. It was a great race.”

Harvick made the final pass as he crossed the start-finish line to take the white flag, while Truex chased him the final lap to finish second — a strong showing after his two wins at Kansas last year.

“He just got through traffic too quick and was too fast,” Truex said. “The flip switched, I got tight, started shaking the right front tire and I knew I was in trouble. He was coming quick.”

“Kevin was ripping there with the new tires at the end. He was the fastest,” Logano said. “My only show was those guys (Harvick and Truex) wrecking each other and they’re too good for that.”

The race was free of wrecks until the last 30 laps, when Alex Bowman and Daniel Suarez got into each other. But things really shook up a few laps later, when Harvick passed Larson on the restart to assume control, and the No. 42 car began bumping with Blaney down the front stretch.

Those two got together, sending Blaney into the wall and Larson into the pits.

“I’m definitely to blame on that,” said Blaney, who won the first stage before Larson had charged to the front to capture the second. “Just trying to side-drift too hard.”

The race had barely returned to green when William Byron triggered a heavy wreck in front of the grandstand. Local favorites Clint Bowyer and Jamie McMurray were among a half-dozen cars involved.

“That one hurt really bad, but I’m fine,” Byron said. “We took two tires and just couldn’t get it turned on the bottom. We were trying to kind of push some things there and it didn’t work out.”

The red flag set up one last sprint to the finish.

Truex used some pit strategy to restart in the lead, and quickly built a buffer. But the No. 4 car swept past Logano and Hamlin on the outside to put Truex in his sights, then Harvick closed on the lead until finally overtaking the reigning series champion with a lap to go.

“They’re hitting on all cylinders,” Truex said. “They’ve got a great balanced race car and they’re doing all the right things, and we’re just a step behind.”

After his week started on a high with the birth of his daughter, Larson was on his way to capping it with a win. But after Harvick got around him on the restart with 25 laps left, Blaney bumped into him as they dueled on the front-stretch, sending the No. 12 car into the outside wall.

Larson needed to have his rear fender fixed, too, and a mix-up with the tire changer in the pits forced him to pit again. That left team owner Chip Ganassi kicking a pit cart in frustration, and forced Larson to restart far enough back that he couldn’t contend for the win.

“We had that we didn’t turn today into a win,” he said, “but satisfying to see how much speed our car had tonight, and good to show Chevy has some speed, at least the 42 team.”

Chevrolet continued to struggle with only Larson breaking the stranglehold of Ford and Toyota for the top 11 spots. Chase Elliott was the next-best Chevy in 12th. Jimmie Johnson was 19th.

Matt Kenseth had a forgettable return to the Cup Series. The former series champ’s first race as part of a timeshare with Trevor Bayne in the No. 6 for Roush Fenway Racing was spent lamenting a lack of speed, and ended when Byron triggered his hard wreck with 15 laps to go.

The series heads to Charlotte Motor Speedway next Saturday night for the All-Star Race. NASCAR will be using a new aerodynamic package that includes restrictor plates designed to create more side-by-side racing, similar to the three-wide racing at Daytona.