The Latest: Israeli ambassador calls on UN to condemn attack 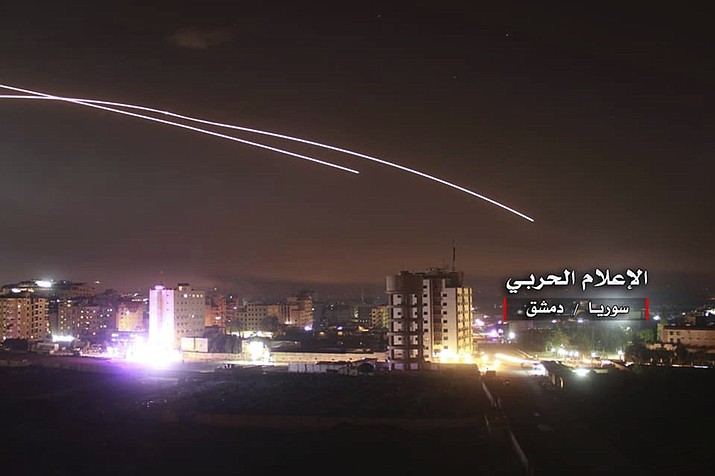 This photo provided early Thursday, May 10, 2018, by the government-controlled Syrian Central Military Media, shows missiles rise into the sky as Israeli missiles hit air defense position and other military bases, in Damascus, Syria. The Israeli military on Thursday said it attacked "dozens" of Iranian targets in neighboring Syria in response to an Iranian rocket barrage on Israeli positions in the Golan Heights, in the most serious military confrontation between the two bitter enemies to date. (Syrian Central Military Media, via AP)

JERUSALEM (AP) — The Latest on the war in Syria, where Israel responded to a rocket attack by launching a wave of missile strikes on Iranian positions (all times local):

Israel's U.N. ambassador is calling on the U.N. Security Council and the secretary-general to immediately condemn Iran's missile attack and demand that Tehran remove its military presence from Syria.

Danny Danon said in letters to the council and U.N. chief Antonio Guterres that "the international community must not stand idly by while a tyrannical regime attacks a sovereign nation and continues to threaten the very existence of a member-state of the United Nations."

Danon said "Israel is not interested in escalation, but under no circumstances will we allow Iran to establish a military presence in Syria whose purpose is to attack Israel and to deteriorate an already fragile situation in the region."

The Security Council, which is deeply divided over Syria, is highly unlikely to issue a statement and no council member has asked for a meeting on the missile attacks against Israel and Syria. Secretary-General Guterres urged "an immediate halt to all hostile acts" to avoid "a new conflagration" in the Middle East.

The United Nations says Secretary-General Antonio Guterres is urging "an immediate halt to all hostile acts" and provocative actions to avoid "a new conflagration" in the Middle East.

U.N. spokesman Stephane Dujarric told reporters the U.N. peacekeeping force on the Golan Heights has maintained contact with the Syrian and Israeli military, "urging both parties to exercise maximum restraint" and abide by the 1974 cease-fire agreement.

He said the secretary-general followed "with utmost concern" overnight reports of missile launches from Syria targeting Israeli positions and retaliatory strikes by Israel and is relieved at Thursday's "partial normalization of the situation."

Dujarric said Guterres is "very engaged" and has been in contact "with various people at various levels" about the attacks.

Benjamin Netanyahu said Thursday in a statement that "we are in a continuous campaign" and that "Israel's military had carried out very extensive strike against Iranian targets" in Syria.

Netanyahu said Syrian batteries fired at Israeli forces "and therefore we struck them."

He warned "whoever attacks us — we will attack them sevenfold and whoever prepares to attack us — we will act against them first."

The prime minister issued the statement as Israel's security cabinet was meeting, according to media reports.

Israel said the targets of the strikes, its largest in Syria since the 1973 war, included weapons storage, logistics sites and intelligence centers used by elite Iranian forces in Syria.

Chancellor Angela Merkel's office says the German leader has condemned an Iranian rocket barrage on Israeli positions in the Golan Heights in a phone conversation with Iranian President Hassan Rouhani.

Merkel's office said the two leaders spoke Thursday. It said in a statement that Merkel underlined the support of Germany, France and Britain for the nuclear deal so long as Tehran continues to fulfill its obligations under that agreement. Merkel advocated opening talks with Iran on its ballistic missile programs and its activities in countries such as Syria and Yemen.

The statement said Merkel condemned the overnight attacks on Israeli positions "and called on Iran to contribute to de-escalation in the region." It didn't say how Rouhani responded.

The White House has condemned Iran's "provocative rocket attacks from Syria against Israeli citizens" and expressed strong support for "Israel's right to act in self-defense."

The statement from press secretary Sarah Huckabee Sanders comes after the most serious direct military confrontation between the two bitter enemies to date. The Israeli military on Thursday said it attacked nearly all of Iran's military installations in neighboring Syria in response to what it described as an Iranian rocket barrage on Israeli positions in the occupied Golan Heights.

Sanders says: "The Iranian regime's deployment into Syria of offensive rocket and missile systems aimed at Israel is an unacceptable and highly dangerous development for the entire Middle East."

A top official from the Arab Gulf country of Bahrain is defending what he says is Israel's "right" to defend itself after Israel launched overnight strikes on Iranian targets in Syria.

Foreign Minister Khalid bin Ahmed Al Khalifa wrote on Twitter Thursday that so long as Iran uses its forces and missiles to try and destabilize the region, "it is the right of any country in the region, including Israel to defend itself by destroying sources of danger."

Israel says Iranian rocket attacks on Israeli positions in the Golan Heights prompted the overnight strikes. Iran has not commented on the accusations.

Bahrain, a close U.S. ally, considers Iran a regional threat. The tiny island-nation accuses its Persian Gulf neighbor of arming and training Shiite Bahraini protesters with the aim of destabilizing the Sunni-ruled country. Bahrain has also welcomed President Donald Trump's decision to withdraw from the nuclear accord with Iran.

Russia says the Israeli strikes on Iranian facilities in Syria have marked a dangerous escalation, urging both Israel and Iran to avoid provoking each other.

He noted that in contacts with the leadership of both countries, including a meeting Wednesday between Russian President Vladimir Putin and Israeli Prime Minister Benjamin Netanyahu, "we underlined the necessity of avoiding any actions that might be mutually provocative." Netanyahu visited Moscow Wednesday to attend celebrations marking the WWII victory anniversary.

Israel said it struck dozens of Iranian targets overnight in response to a rocket barrage on Israeli positions in the Golan Heights, the biggest Israeli strike in Syria since the 1973 war.

Britain has condemned "in the strongest terms" a suspected Iranian rocket attack against Israeli positions in the Golan Heights.

In a statement Thursday, Foreign Secretary Boris Johnson urged Iran to refrain from actions that could destabilize the region. Johnson also called on Russia to press the Syrian government, its ally, to work toward a broader political settlement.

The attack in the Golan prompted Israel to launch a wave of missile strikes at Iranian targets inside Syria. Iran has not commented on the exchange of fire. Syria's military said the Israeli strikes killed three people and damaged a number of its air defense units.

German Chancellor Angela Merkel and French President Emmanuel Macron are calling for de-escalation in the Middle East after an alleged Iranian rocket barrage on Israeli positions in the Golan Heights prompted Israeli strikes on Iranian targets in Syria.

Merkel and Macron met in Aachen, Germany Thursday on the sidelines of a ceremony where Macron was awarded a prize for contributions to European unity. The German government said they discussed events in the Middle East and called for "level-headedness and de-escalation in the region."

Merkel alluded to the two countries' support for the Iran nuclear deal. She said: "We know that we face an extremely complicated situation here. The escalation of the last few hours shows it is truly a matter of war and peace, and I can only call on all involved to exercise restraint."

Mayhoub did not say whether Iranian forces or Iran-backed militiamen were among those killed or wounded.

The Russian military says Israel fired more than 70 missiles at Iranian facilities in Syria and that Syrian air defenses shot down more than half of them.

Israel says it struck dozens of Iranian targets overnight in response to a rocket barrage on Israeli positions in the Golan Heights. It was the biggest Israeli strike in Syria since the 1973 war.

Russia is a key ally of Syrian President Bashar Assad, and has been waging its own air campaign on his behalf since 2015.

The Britain-based Syrian Observatory for Human Rights says Thursday the overnight attacks struck several military posts for Syrian troops and Iranian-backed militias near the capital, Damascus, in central Syria and in southern Syria.

The head of the Observatory, Rami Abdurrahman, said five Syrian soldiers, including two officers, and 18 militia fighters were killed. Abdurrahman says it is not immediately clear if Iranians were among those killed.

He says the toll is likely to rise because some of the wounded are in critical condition.

The Observatory says the strikes targeted suspected locations of the Lebanese Hezbollah group, as well as areas where Iranian advisers are believed to be based.

Syrian President Bashar Assad has accused U.S. President Donald Trump of saying one thing one day and the opposite the next, saying "I don't think in the meantime we can achieve anything with such an administration."

Assad spoke in an interview with the Greek Kathimerini newspaper published Thursday, before Israel carried out airstrikes in Syria in response to what it said was a cross-border rocket attack by Iranian forces.

He appeared to be referring to conflicting messages from the White House on how long it plans to keep American troops in Syria and its plans going forward.

Assad says wise Russian leadership has managed to avoid a full-blown conflict with Washington. He says: "I hope we don't see any direct conflict between these superpowers, because this is where things are going to be out of control for the rest of the world."

Both Russia and Iran have provided crucial military support to Assad's forces.

Israel's defense minister says the military has struck "nearly all" of the Iranian infrastructure sites in Syria.

Avigdor Lieberman says Thursday Israel responded fiercely to an unprecedented rocket attack by Iranian forces in Syria against Israel. He says no one was harmed in Israel and all the rockets were either intercepted or fell short.

Lieberman told the Herzliya Conference, an annual security gathering north of Tel Aviv, that "if it rains on us it will be a flood on them."

Israel attacked dozens of Iranian targets overnight in response to the rocket barrage on Israeli positions in the Golan Heights. It was the most serious military confrontation between Israel and Iran to date and Israel's biggest strike in Syria since the 1973 war.

The Israeli military says it attacked dozens of Iranian targets in neighboring Syria in response to an Iranian rocket barrage on Israeli positions in the Golan Heights, in the most serious military confrontation between the two bitter enemies to date.

The blistering Israeli assault was by far the most intensive Israeli action in neighboring Syria since the civil war broke out there in 2011. Israel has tried to stay on the sidelines but has acknowledged over 100 airstrikes over the past seven years.