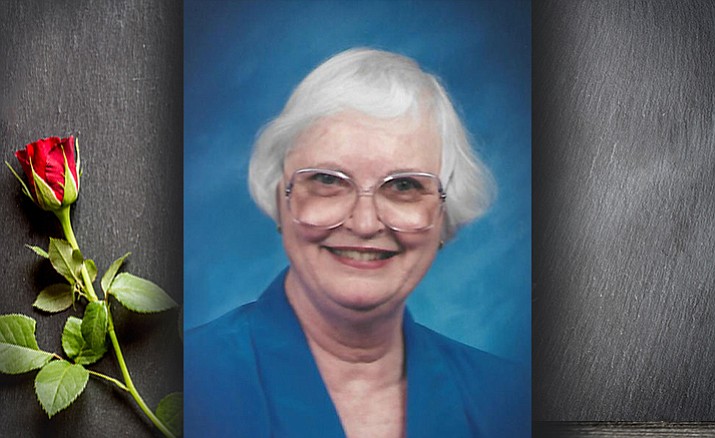 Marilyn (Steinlicht) Wright, 83, of Prescott, Arizona, died Sunday, May 6, 2018, at Marley House after a short illness.

Born in Paxton, Illinois, she was the daughter of William F. And Margaret (Irvin) Steinlicht.

Marilyn graduated from Hammond (Ind.) High School, and worked as a service representative for the Bell Cos for 10 years.

She and her husband, Bob, with whom she celebrated almost 58 years of marriage, lived in Florida, Maryland and New Jersey before retiring to Prescott 25 years ago. She held an associate’s degree in Applied Science in Marketing, and worked as a medical marketing survey agent with Infomedics in Princeton, New Jersey, for six years, and as a travel agent for five years. Marilyn was an active member of Prescott United Methodist Church, serving in Lydia’s Circle and attending weekly Bible study. In 2017, she moved to Las Fuentes Resort Village in Prescott, where she will be fondly remembered, but greatly missed by her many friends. She is survived by her two sons, James R. of Pennsylvania; and David A. of Virginia; a sister, Beverly Stark of Indiana; and two grandchildren, Michael and Jillian.

She was preceded in death by her husband and her parents.

In lieu of flowers, donations may be made to Good Samaritan Society-Prescott Hospice, or a charity of your choice. Ruffner-Wakelin Funeral Homes And Crematory assisted the family with final arrangements.

A private memorial will be held at a future date.

Arrangements entrusted to Ruffner-Wakelin Funeral Homes and Crematory. Sign the guestbook at www.ruffnerwakelin.com.