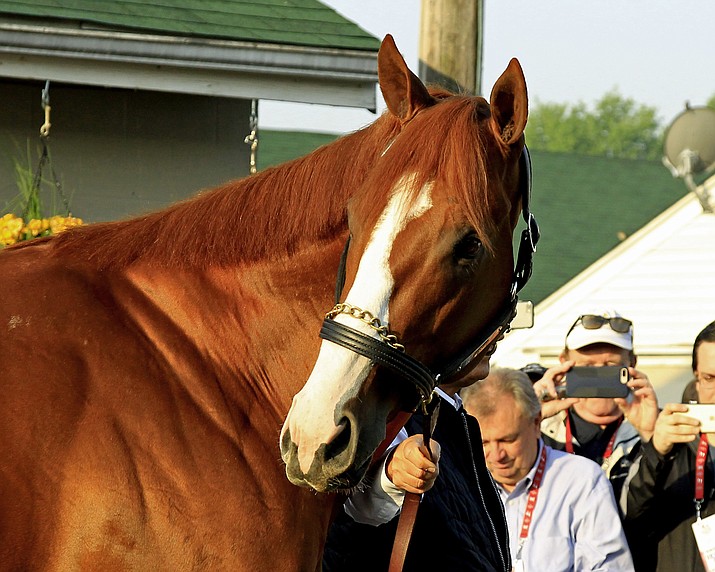 LOUISVILLE, Ky. — The competition isn’t exactly lining up to take on Kentucky Derby winner Justify in the Preakness.

Of his 19 rivals in the Derby, it appears most will skip the second leg of the Triple Crown in favor of resting and being pointed toward other races. That leaves mostly fresh horses to potentially fill the maximum 14-horse Preakness field.

A day after Justify raced to a 2½-length victory in the slop as the 5-2 favorite, trainer Bob Baffert and his star horse drew a horde of visitors to his barn at Churchill Downs.

Baffert guided his fifth Derby winner out of the barn and walked him in a tight circle for fans who eagerly snapped photos on their phones. The chestnut colt’s coat shone in the morning sunlight and he nibbled on a couple of baby carrots Baffert plucked from his vest pocket.

It was a quick appearance.

With Justify playfully tossing his head, Baffert knew it was best to get the champ back in his stall where he couldn’t inadvertently kick anyone.

“When I came out of the stall, he was pulling me,” the trainer said. “Usually they’re a little bit tired, but he was good.”

Baffert’s phone rang Sunday with an official invitation to bring Justify to run in the Preakness on May 19 in Baltimore.

Of course, American Pharoah went on to capture the Belmont and complete the sport’s first Triple Crown sweep in 37 years.

But Baffert isn’t going there yet.

Baffert plans to leave Justify at Churchill Downs until shipping the chestnut colt to Pimlico likely the Wednesday of race week.

“I want to give myself a little room to really observe the horse,” Brown said. “The horse will tell us.”

D. Wayne Lukas expects to have two Preakness runners: Bravazo, sixth in the Derby, and Sporting Chance, fourth in the Pat Day Mile on the Derby undercard. Lukas has won the Preakness six times.