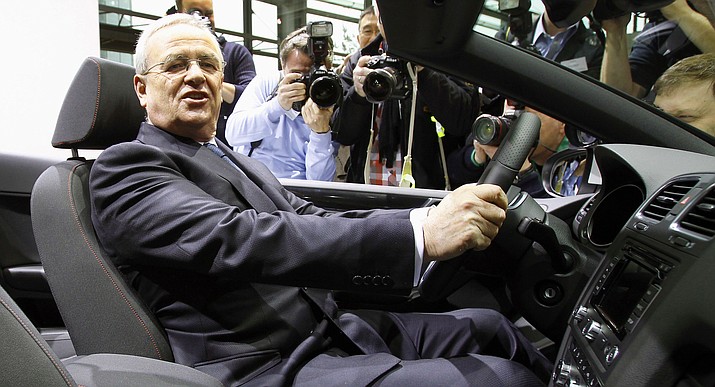 In this March 12, 2012, file photo, Volkswagen CEO Martin Winterkorn poses for the media in Wolfsburg, Germany. Winterkorn later resigned, when a federal grand jury in Detroit indicted him on charges stemming from the company's diesel emissions cheating scandal in a plot that prosecutors allege reached the top of the world's largest automaker. (AP Photo/Michael Sohn,file)

PHOENIX — Volkswagen will be shelling out $40 million to settle charges that it defrauded Arizona residents by selling them vehicles billed as clean-burning diesel, something they were not.

The deal, being announced Wednesday, provides payments up to $1,000 to each of about 10,000 Arizonans who bought or leased vehicles manufactured by VW, Audi and Porsche between 2008 to 2015. The money they get will be in addition to anything they have received or will receive from a nationwide lawsuit.

Another $20 million is going into the state general fund. Attorney General Mark Brnovich said these dollars will be used to help fund the increased aid for public education.

What’s left over will pay both the state’s legal fees and also go into an account that Brnovich can use to investigate future consumer fraud claims of any kind.

Brnovich said Arizona is the first and, for the moment, only state to actually obtain direct consumer restitution through its own litigation.

In this file photo, a Volkswagen Touareg diesel is tested in the Environmental Protection Agency's cold temperature test facility in Ann Arbor, Mich. Volkswagen announced Wednesday, May 2, 2018 that the company will pay $40 million to settle charges that it defrauded Arizona residents by selling them vehicles billed as clean-burning diesel, something they were not. (AP Photo/Carlos Osorio, File)

The company already agreed to pay $4.3 billion in penalties to settle charges brought by the U.S. Environmental Protection Agency. And VW is paying out another $17.5 billion to resolve civil lawsuits by customers and dealers.

“The Attorney General’s Office isn’t afraid to take on a fight when Arizona consumers are deceived, which is why we filed our own consumer fraud lawsuit,’’ Brnovich said in a prepared statement. “We believed Arizona consumers deserved more and now they’re getting more.’’

The case filed in 2016 surrounds the sale of vehicles with a special diesel engine that was advertised as having just a fraction of the emissions as similar cars. Buyers paid anywhere from $1,000 to $7,000 more than comparable vehicles.

But those low emissions were, in many ways, on paper only. It turns out that VW engineers had programmed each vehicle’s computer to recognize when it was being tested for emissions. At that point, it would go into a low-power mode with sharply reduced pollution.

Once the test was over, the engine returned to full power. Only thing is, that mode produced more pollutants, including as much as 40 times the maximum allowable standards of nitrogen oxides.

Brnovich said that in hiding that information the company violated the state’s Consumer Fraud Act.

Attorneys for the company fought the lawsuit. They acknowledged VW marketed its cars to Arizona residents. But its lawyers argued that did not deliberately target Arizona consumers, pointing out this was part of a national campaign.

In agreeing to the deal, VW is not acknowledging fault but says it simply wants to settle the matter.

A third-part administrator will be selected to help identify harmed consumers who will get a letter. Consumers have 90 days to return their form and collect up to $1,000 in restitution if eligible.