McCain gets visits from friends, family after surgery 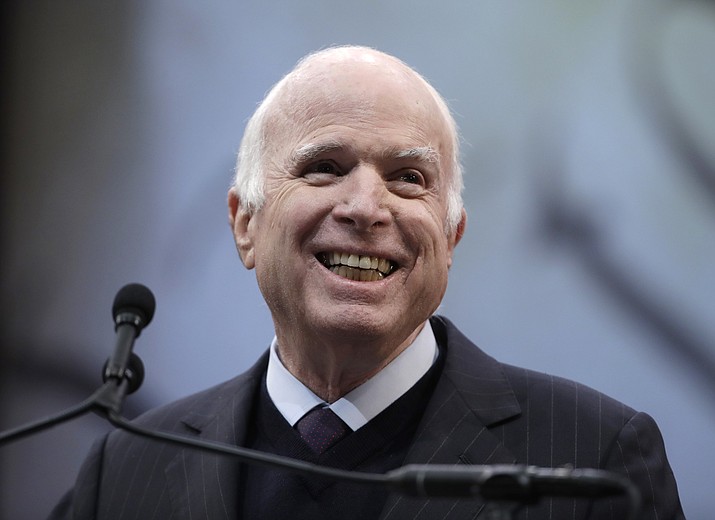 A frail Sen. John McCain has been receiving a stream of visitors and good wishes at his Arizona ranch as he confronts the aftermath of brain cancer treatment and surgery.

Former Vice President Joe Biden sat with McCain for 90 minutes last Sunday, according to people close to both men. Biden followed McCain’s closest friends, Sen. Lindsey Graham of South Carolina and retired Connecticut Sen. Joe Lieberman, who visited McCain at the Mayo Clinic in Phoenix two weeks ago. McCain’s daughter, Meghan, tweeted Friday that she was heading to her father’s side.

“Going home to Arizona to be with my family,” she tweeted. “Thank you all again for your prayers, patience, understanding and compassion during this time. It means the world to me and my entire family.”

McCain, 81, had hoped to return to the Senate, where he’s served since 1987. He has been unable to do so after cancer treatment and surgery for an intestinal infection last month. Despite that, he’s finished work on a new book being released May 22, “The Restless Wave.” And he continued to advocate for a return to the days when partisans could disagree without demonizing each other.

“I’d like to see us recover our sense that we’re more alike than different,” McCain said in audio excerpts from his book reported by National Public Radio.

McCain has amplified his call for more civil politics since his diagnosis in July with glioblastoma. It is the same rare and aggressive brain cancer that felled his friend, Democratic Sen.

McCain hasn’t been seen in public since December, just before he was hospitalized for a viral infection at Walter Reed National Medical Center in Maryland. He then returned home to Arizona to recover, do physical therapy and continue cancer treatment at the Mayo Clinic.

On Dec. 17, his office issued a news release saying he was looking forward to returning to Washington in January.

McCain did not return.

He has primarily been staying at his family retreat south of Sedona, Arizona, a sprawling and secluded ranch house along tree-lined Oak Creek where he loves to have family gatherings and barbecue for friends. His daughter, Meghan, was married there in November to Ben Domenech, publisher of the online political and cultural magazine The Federalist. The senator has been known to lead nature tours featuring his extensive knowledge of dozens of species of birds on the property.