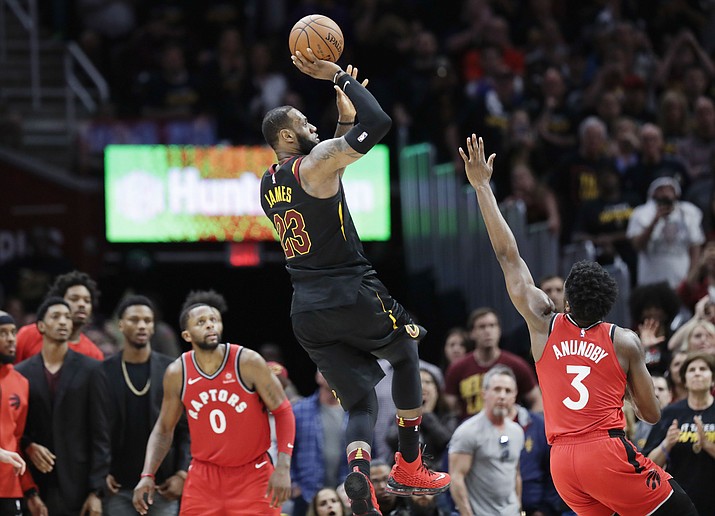 Cleveland Cavaliers' LeBron James (23) hits the game-winning shot as Toronto Raptors' CJ Miles (0) looks on during the second half of Game 3 of an NBA basketball second-round playoff series, Saturday, May 5, 2018, in Cleveland. The Cavaliers defeated the Raptors 105-103. (Tony Dejak/AP)

CLEVELAND — LeBron James banked in a running one-hander at the buzzer, giving Cleveland a 105-103 win over Toronto on Saturday night in Game 3 and shoving the Raptors to the edge of their most devastating playoff exit.

After the Raptors tied it on rookie OG Anunoby’s 3-pointer with eight seconds left, James took the inbounds pass, dribbled the length of the floor and in one motion, dropped his 10-footer in front of Toronto’s stunned bench.

The Cavs ran and mobbed James and moments later he was back up on the scorer’s table — just like after a game-winner against Indiana last round — to celebrate a win that was up for grabs.

James finished with 38 points, Kevin Love added 21 and 16 rebounds and Kyle Korver 18 for the Cavs, who can sweep the Raptors for the second straight year.

Kyle Lowry scored 27 for Toronto, which clawed back in the fourth quarter with All-Star DeMar DeRozan on the bench.

After winning two games in Canada, the Cavs came home and won a brawl with the Raptors, who just can’t beat James. He’s 11-2 against Toronto in the past three postseasons.

PHILADELPHIA — Al Horford scored the go-ahead basket for Boston late in overtime in a wild Game 3 where the 76ers gave away the basketball and the confetti, leading the Celtics to a win.

The Celtics go for the sweep on Monday.

The ending to regulation was about as wild as it gets for both teams. JJ Redick threw away the basketball on an errant pass to no one that was scooped by Terry Rozier who threw to Jaylen Brown for the basket and an 89-87 lead.

Seconds later, Marco Belinelli stunned everyone with a falling 22-footer in front of the 76ers bench as time expired that sent the game into overtime — and confetti mistakenly blasted from the cannon. There was about a seven-minute delay while team employees scrambled to clean up the mess on the court. Some players even scooped up confetti as everyone waited for the start of overtime.

Belinelli opened OT with a 23-footer and Redick followed with a 3 that appeared to take him off the hook.

But the Celtics wouldn’t let them pull away and Horford escaped for a layup with 5.5 seconds that gave Boston a 99-98 lead. Ben Simmons then threw the ball away after a timeout and Horford sealed the win with two free throws.