Kobritz: Surprise ... root of NCAA is money
Column: Beyond the Lines 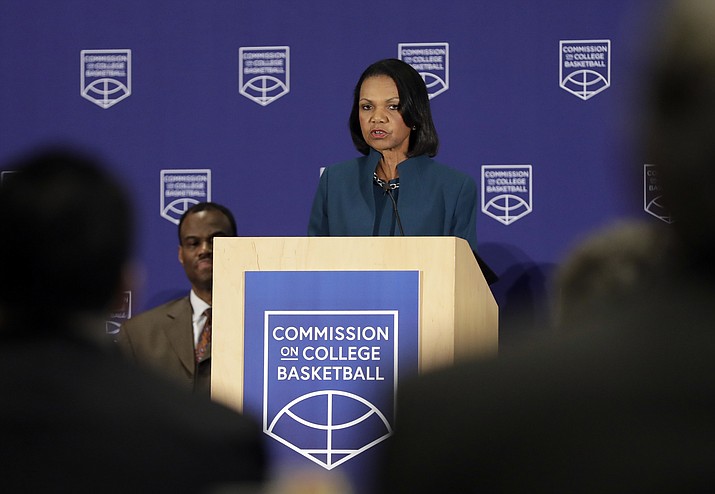 Former U.S. Secretary of State Condoleezza Rice speaks during a news conference at the NCAA headquarters, Wednesday, April 25, 2018, in Indianapolis. The Commission on College Basketball led by Rice, released a detailed 60-page report Wednesday, seven months after the NCAA formed the group to respond to a federal corruption investigation that rocked college basketball. (AP Photo/Darron Cummings)

In the wake of last fall’s federal indictments involving men’s basketball scandals, the NCAA formed a commission to address reforms. After months of deliberations, the commission issued a 60-page report containing a number of recommendations. While the commission failed to address the elephant in the room — compensation of the players — it would be disingenuous to accuse the commission of doing nothing.

The report pulled no punches, as demonstrated by this statement: “The levels of corruption and deception are now at a point that they threaten the very survival of the college game as we know it,” a fact even the normally oblivious NCAA couldn’t deny. Men’s basketball is a billion-dollar-a-year gravy train that funds the entire operating budget of the governing body. Lose the revenue from men’s basketball and the NCAA would shrivel up and cease to exist.

That’s why NCAA President Mark Emmert asked Condoleezza Rice, former Secretary of State, to lead the commission. He hoped her stature would lend credibility to any recommendations designed to fix a system mired in corruption, a fact that was patently obvious after a grand jury indicted coaches and shoe company executives involved in schemes to funnel money to prospects and their families in exchange for commitments to attend certain colleges.

The commission recommended allowing regulated contact between athletes and agents, overhauling summer basketball showcase events to provide more “transparency and accountability,” and eliminating the so-called one-and-done rule, which requires players to be 19 years old or a year removed from high school to be eligible for the NBA draft. The latter recommendation has no teeth, as it isn’t a rule adopted by the NCAA but part of the agreement between the NBA and the National Basketball Players Association. Only those parties can change it, which may happen but not before the 2020 draft at the earliest.

The commission was undeterred, saying if the NBA and its players’ union didn’t change the rule, it would reconvene to consider unilateral alternatives such as freshman ineligibility.

Of all the recommendations the one that could have the greatest deterrent effect on illegal activities is increasing the severity of penalties for teams and coaches who violate rules, to five-year postseason bans for teams and potential lifetime suspensions for coaches.

Emmert said he expects all the commission’s recommendations to be adopted, some as early as this summer, no surprise given the commission was stacked with NCAA insiders and loyalists.

The commission acknowledged the obvious: The root to all evil in college basketball is money, which is complicated by the fact those who are most responsible for generating it — the players — share in the smallest percentage. But the commission said it would not address compensating athletes until current litigation involving that issue runs its course.

While it wouldn’t be fair to accuse the commission of whiffing on an attempt to overhaul men’s basketball, Rice admitted they didn’t exactly hit a home run. But it’s a start. You must get on base before you can score and at the very least, the commission hit a single.

Jordan Kobritz is a former attorney, CPA, Minor League Baseball team owner and current investor in MiLB teams. He is a professor in and chair of the Sport Management Department at SUNY Cortland and maintains the blog, sportsbeyondthelines.com. The opinions in this column are the author’s. Kobritz can be reached at jordan.kobritz@cortland.edu.