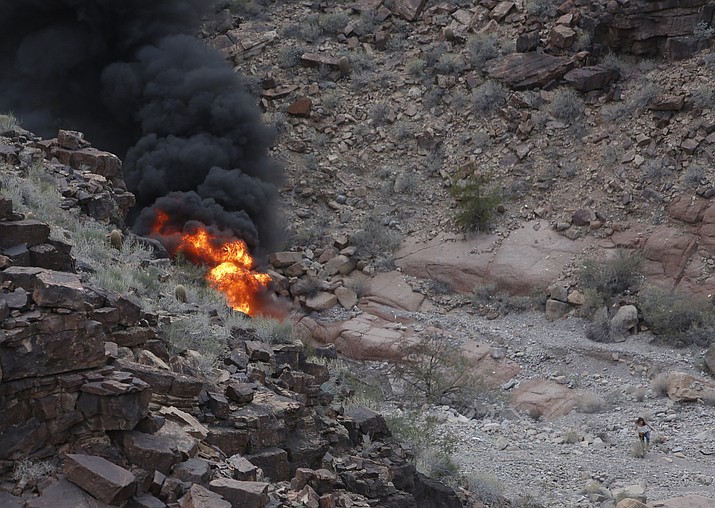 In this Saturday, Feb. 10, 2018, file photo, a survivor, lower right, walks away from the scene of a deadly tour helicopter crash along the jagged rocks of the Grand Canyon, in Arizona. Autopsies from a fiery helicopter crash at the Grand Canyon earlier this year show two British tourists aboard died of smoke inhalation and burns that covered 100 percent of their bodies. The Mohave County Medical Examiner's Office released autopsy reports Wednesday, May 2, 2018, for 27-year-old Rebecca Dobson and 31-year-old Jason Hill. They died at the scene, along with Hill's brother, 30-year-old Stuart Hill. (Teddy Fujimoto via AP,File)

FLAGSTAFF, Ariz. (AP) — Three British tourists killed in a fiery helicopter crash at the Grand Canyon earlier this year died of smoke inhalation and burns that covered their entire bodies, according to autopsies released Wednesday.

Newlyweds Jonathan Udall, 31, and, Ellie Milward Udall, 29, died days after the Feb. 10 accident at a Las Vegas hospital. A Nevada medical examiner said both died from complications from burn injuries.

According to the Mohave County medical examiner, the Hill brothers and Dobson were burned beyond recognition. There also was evidence they suffered carbon monoxide poisoning.

Udall's family is suing helicopter owner Papillon Airways and manufacturer Airbus Helicopters. The wrongful-death lawsuit, filed in March in Las Vegas by Udall's parents, says he would have survived if the aircraft had a crash-resistant fuel system.

The Udalls' attorney did not immediately respond Wednesday to a message seeking comment.

The crash-resistant systems have fuel tanks that expand, rather than rupture, on impact and self-sealing components to keep fuel from spreading. They are meant to prevent aircraft from catching fire and lessen the chance that people on board get burned.

Airbus officials said the company now builds helicopters with the new fuel systems and supports operators who chose to retrofit their Airbus aircraft with them.

Papillon Airways CEO Brenda Halvorson has said it is "misguided" for attorneys to make allegations about the accident before the National Transportation Safety Board finishes its investigation.

The six friends were in Las Vegas to celebrate Stuart Hill's birthday and were on a sightseeing tour over tribal land in the Grand Canyon.