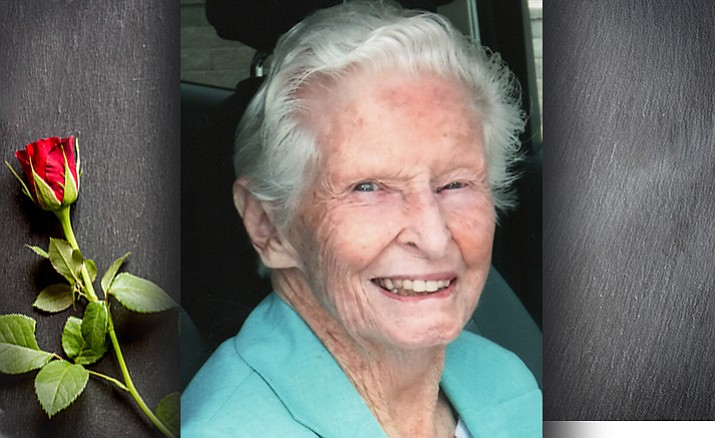 Anita Darline Grace went to be with our Lord and Holy Mother on April 18, 2018. She was born on April 4, 1925, to Kenneth Howard Sleeper and Anita Ruby Kirby in Los Angeles, California. When she was 5 years old, her mother was re-married to Stanley Jarocha, and Anita and her brother, Ken, were adopted by Stanley and given his last name. At the ages of 9 and 11, their mother passed away; and Ken and Anita were taken to live with their Grandmother Rachel Kirby in Government Prairie near Parks, Arizona. The children had a happy life with their Grandmother, who “believed everyone should go to church or Sunday school, so we went to whichever one was nearest to us, usually a Baptist Sunday School.” When Anita was 17 and had just graduated from Flagstaff High School, she married her childhood sweetheart, Donnelly R. McMillan, in 1942. First Lt. McMillan’s airplane was shot down over the South Pacific Ocean and he never saw their daughter, Donna Jean, who was three months old. Several years later, Anita met the love of her life, Robert L. Grace, and became a member of the Catholic faith; and they married Feb. 21, 1945. Robert adopted Donna Jean, and then they had four more children. There were many busy years of childrearing, but Anita completed an Associate Degree in Nursing at NAU in 1974, and got her BSN in nursing from NAU in 1985. She worked at Northern Arizona University in various capacities, and as a nurse at Marcus J. Lawrence Hospital in Cottonwood, and for Yavapai Community College, retiring from nursing in 1990.

Anita and Robert had been married for 44 years when he passed away following a heart surgery in 1989. Anita had become a member of the Third Order of St. Francis (now known as the Secular Franciscans) in 1967, and true to her giving nature, after Robert’s death; she became a Franciscan Covenant Volunteer at Old Mission Santa Barbara in California in 1991, where she nursed elderly and infirm friars. She traveled with friends she had made there, to Italy for Franciscan Pilgrimages; and also to New Zealand, Tahiti, the Fiji Islands, Germany, and Turkey. In 1998, Anita was accepted into the Franciscan School of Theology at Berkely, California. She graduated from there with a Master’s Degree in Theology at the age of 75, and then entered into a Chaplaincy internship at Thunderbird Samaritan Hospital in Phoenix, Arizona. A quote from a paper she wrote during her Master’s Program is as follows: “My God is a God of blessing. I have been truly blessed in my life and for this I praise and bless the Lord and give thanks always.” In her later years, Anita spent time at her home on the prairie, and then she moved to Brookdale Assisted Care Home in Prescott, where she made many friends among residents and staff for the past five years.

She exemplified her faith in the last years of life as her body began to fail; she attended the Contemplative Prayer Group at Sacred Heart Church in Prescott until a few months before her death.

Anita lost her only brother, Kenneth Howard Jarocha, in 2013. She is survived by her five children, Donna Jean Wright (Karl), Stephanie Ann Scott, Janice Lee Grady (Dennis), Robert William Grace, and David Christopher Grace; eight grandchildren and 10 great-grandchildren; her first cousin, Mary Katherine Dickey; her niece, Paula Lynn Smith (Steve); and her half-sister, Jan Castle. She always stated: “The most important thing in my life is my family.” Rosary and Funeral Mass are May 5, 2018, at 10:30 a.m., at Immaculate Conception Church, 700 Bill Gray Road in Cottonwood, Arizona, followed by burial at the Clarkdale Cemetery next to her husband, Robert. Guests may join the family at Su Casa Restaurant in Clarkdale, following the burial for a Celebration of Life.

Donations may be made to St. Vincent de Paul Pantry 120 N. Summit, Prescott, AZ, 86301 or the Franciscan Friars of Old Mission Santa Barbara, California. Arrangements by Westcott Funeral Home in Cottonwood. An online guestbook is available to sign at www.westcottfuneralhome.com