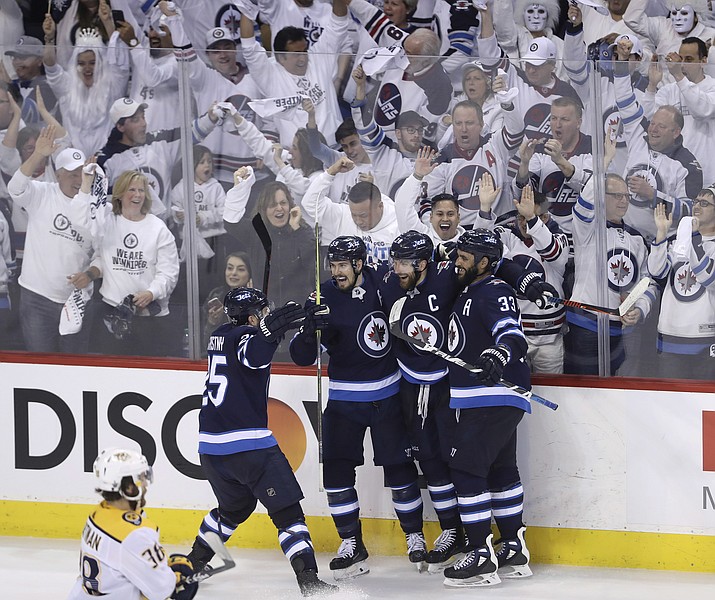 WINNIPEG, Manitoba — Blake Wheeler scored on the power play with 4:59 to play and the Winnipeg Jets roared back from an early 3-0 deficit to defeat the Nashville Predators 7-4 on Tuesday night and grab a 2-1 lead in their second-round playoff series.

After missing on a number of earlier chances, the Jets captain connected on a rebound off Mark Scheifele’s shot from a tight angle for his second of the postseason.

Dustin Byfuglien had two goals and an assist for Winnipeg, while Paul Stastny added a goal and two assists.

Wheeler also had an assist and added the empty-netter with under a minute to play. Brandon Tanev also scored with Rinne on the bench in the game’s final minute.

Jacob Trouba scored a goal and set up another for a two-point night. Connor Hellebuyck made 26 stops.

Filip Forsberg and P.K. Subban each had a goal and an assist for Nashville, while Mike Fisher and Austin Watson also scored.

Mattias Ekholm and Ryan Johansen both added two assists for the Predators, who got 38 stops from Pekka Rinne.

Game 4 is Thursday night in Winnipeg before things shift back to Nashville for Game 5 on Saturday.

Nashville blew a 3-0 lead after the opening 20 minutes to trail 4-3 through two periods, but tied it 4-4 at 7:40 of the third when Forsberg wheeled across the top of the slot on the power play to beat Hellebuyck upstairs with his fifth goal of the playoffs after Winnipeg’s Patrik Laine hit the post.

Trouba then turned the puck over at the offensive blue line to send Viktor Arvidsson in alone on a breakaway, but Hellebuyck was there with a big glove stop.

Winnipeg got its third man advantage of the third with 5:59 remaining when Subban went off for high sticking after failing to clear the puck twice late in a previous Jets power play before Wheeler scored the winner.

Winnipeg’s Kyle Connor missed on a breakaway that would have sealed it on another man advantage before Nick Bonino hit the post at the other end for Nashville.

Wheeler and Tanev sealed it into an empty net in the final minute.

Down 3-0 after a poor first period, Winnipeg roared out of the gate in the second to tie it during a frantic three-minute stretch.

Stastny got the comeback started at 2:38 when Trouba’s bouncing shot from the point struck his skate in front and ricocheted in off the crossbar and straight out.

The veteran center raised his arms in celebration, but play continued for a few seconds before officials blew the sequence dead to check if the puck crossed the line.

Wheeler then missed a wide-open net after a Rinne turnover before getting cleaned out by Watson along the boards.

Mark Scheifele came to Wheeler’s defense to nullify what would have been a Winnipeg power play, but the Jets made it 3-2 when Byfuglien blasted his second of the playoffs past Rinne at 5:11.

Then with the teams still playing 4-on-4, Trouba took a slick pass from Wheeler just 18 seconds later and the crowd erupted after his second of the postseason.

Winnipeg imposed its physical will as the period wore on, hitting Nashville’s defense at every opportunity, and the pressure finally paid off with 45 seconds remaining when Laine fed Byfuglien for his second of the game.

The big defenseman celebrated by removing a glove and dancing — a far cry from the playful punches he threw at teammates after Winnipeg tied Game 2 late in regulation.