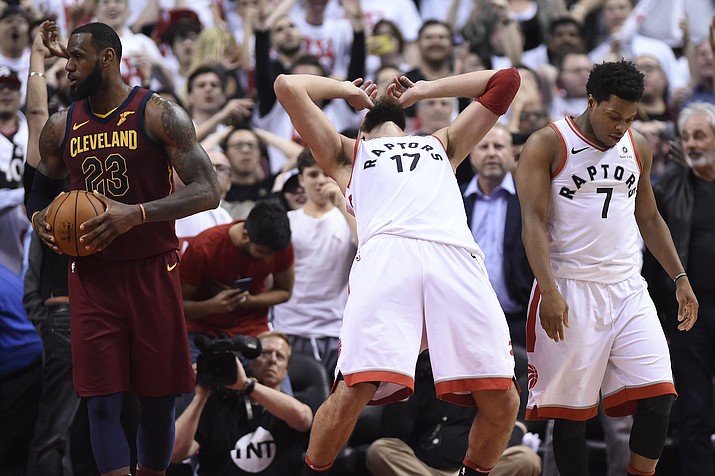 TORONTO — LeBron James had 26 points, 13 assists and 11 rebounds, J.R. Smith scored 20 points and the Cleveland Cavaliers beat the Toronto Raptors 113-112 in overtime on Tuesday night to win Game 1 of their second-round playoff series.

Kyle Korver scored 19 points, including the go-ahead 3-pointer in overtime after Cleveland never led in regulation. Tristan Thompson had 14 points and 12 rebounds for the Cavaliers, who have eliminated Toronto in each of the past two postseasons.

Toronto’s Fred VanVleet missed a 3-pointer with 3.4 seconds to go in overtime that could have won it for the Raptors, who couldn’t hold on to a 14-point, first-quarter lead.

Jonas Valanciunas had 21 points and 21 rebounds, Kyle Lowry had 18 points and 10 assists, and DeMar DeRozan scored 22 points for the Raptors, who host Game 2 on Thursday night.

The Cavaliers beat the Raptors in six games in the Eastern Conference finals in 2016 before going on to win their first NBA championship. Last year, Cleveland swept Toronto in the second round.

Korver’s 3 early in overtime gave the Cavaliers their first lead of the game, 108-105.

Lowry’s three-point play made it 113-112 with 57 seconds to go and, after the Cavs were called for a shot-clock violation, Toronto had one more chance to win, but VanVleet couldn’t come through.

VanVleet was one of four Raptors to miss in the final seconds of regulation. Toronto got four looks at the potential winning basket on its next possession but missed all four, including a wide-open 3 by VanVleet, giving Cleveland the ball with 0.6 seconds remaining. Green inbounded to James, but his shot bounced off the rim.

The Raptors shot 5 for 24 in the fourth quarter, with Valanciunas missing six of seven attempts.

DeRozan scored 11 points in the first, connecting on five of eight attempts, and Lowry had eight points and five assists as Toronto led 33-19. James was 3 of 5 in the first but the rest of the Cavs shot 4 for 18.

James, who averaged more than 41 minutes in Cleveland’s first-round series against Indiana, checked out with 3:31 left in the first. With James on the bench, the Cavs scored two points the rest of the quarter.

Green and Smith each scored 11 points in the second quarter and the Cavs found their shooting stroke, connecting on 14 of 22 attempts. James had five assists in the period as Cleveland cut the deficit to 60-57 at halftime.

VanVleet took exception to a shove from James at the end of one play and made an attempt to get at the Cavs star, but was restrained by teammates.

Valanciunas had 13 points and eight rebounds in the third, but Korver scored 10 points and James had eight to keep the Cavs close. Toronto led 87-82 heading to the fourth.

Cavaliers: Cleveland allowed 100 or more points for the third time in eight postseason games. ... James dove into a courtside broadcast table in search of a loose ball late in the fourth. ... Love missed all four of his shot attempts in the first went 1 for 7 in the first half. ... Kendrick Perkins traded angry words with rapper Drake, Toronto’s global ambassador, as the teams walked off at halftime. Former Raptors guard Jose Calderon stood in front of Drake during the exchange, while Smith moved Perkins toward the locker room.

Raptors: Toronto had 10 assists on 13 made baskets in the first ... The Raptors had nine turnovers in the first half, leading to 15 points for the Cavaliers. They finished with 14, leading to 21 Cleveland points. ... Actor Wendell Pierce attended the game.