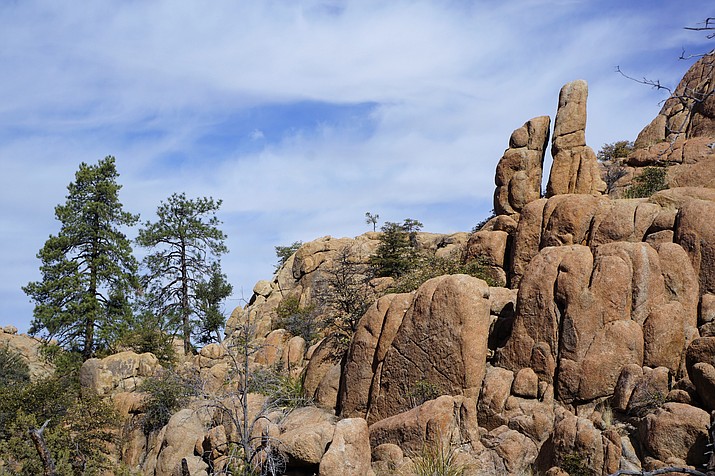 The new Easter Island Trail in Prescott’s Granite Dells plays off the unusual rock formations in the area east of the Peavine Trail. Trail builders say the rock towers were reminiscent of the World Heritage-Site statues on the actual Easter Island in the southeastern Pacific Ocean. The city trail is scheduled to be open by Friday afternoon, in time for the Easter weekend. (Cindy Barks/Courier)

Why it’s great right now: The new trail traverses the City of Prescott’s late-2017 purchase of 160 acres of open space in the Storm Ranch North.

Just in time for what is shaping up to a warm and mostly-sunny Easter weekend, a new trail in Prescott’s Granite Dells will take visitors figuratively to “Easter Island.”

The City of Prescott’s Recreation Services Department plans to open its new two miles or so of trail in the recently purchased 160-acre parcel of Storm Ranch North land by Friday afternoon, March 30.

Dubbed the Easter Island Trail for the statuesque granite formations that dot the site — reminiscent of the World Heritage rock statues on the Chilean island in the southeastern Pacific Ocean — the trail winds its way through the Dells, east of the Peavine Trail.

Dozens of volunteers with the Over the Hill group have been working vigorously in recent weeks to finish the trail that will give the public its first access to the scenic area.

“We really wanted to get something open as soon as possible,” Chris Hosking, the city’s trails and natural parklands coordinator, said as he supervised more than 30 volunteers along the trail route Monday, March 26. “We’ve been working three times a week.”

To get to the new trail, users will have to hike or ride a minimum of one-and-a-half miles of the Peavine rails-to-trail route. With the one- to two-and-a-half-mile stretch of Peavine, a hike on the new trail will combine for a four-to-six-mile hike.

Hosking said four access points will be available along the eastern side of the Peavine, allowing for a variety of loop hikes. The first will be located across from the Watson Lake cove area — about one and a half miles north of the Sundog Ranch trailhead.

Users should look for the gate on the right-hand side of the Peavine, where the new trail will begin switch-backing its way through the Dells, offering overlooks of Watson Lake with Granite Mountain as a distant backdrop.

Along the way, the Easter Island Trail passes by a number of unusual rock formations. “We named it Easter Island because of the big towers of rock, plus we’re opening it up on Easter,” Hosking said.

Another prominent feature of the trail will be its frontage along Boulder Creek, a seasonal waterway that, true to its name, cascades through a boulder-strewn canyon.

Although the creek is not currently running, pools of water still remained this week from recent rains. 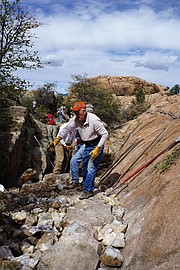 Over the Hill Gang volunteer Ed Baker throws a rock into place along a section of trail that is under construction in the Quartz Canyon section of the Granite Dells. (Cindy Barks/Courier)

On Monday, the Over the Hill Gang was busy filling in a ravine with pieces of quartz that were littered throughout a canyon, which now carries the name Quartz Canyon.

Hosking, who has visited the new open space parcel dozens of times, designed the trail to take advantage of its views and prominent features.

Allan Grell, an Over the Hill Gang volunteer for the past six years, said Hosking’s design “always surprises us. He tells us the trail’s going to go through here, and somehow, it does.”

Connecting with the Easter Island Trail is the Boulder Creek Trail, which loops back up with the Peavine Trail about two and a half miles north of the Sundog Ranch Road Trailhead.

While a network of lakeside trails has existed on the west side of the Peavine for years, Hosking said the Storm Ranch North trails will offer variety for Dells users.

“It just has a different feel to it,” he said of the new open space. “It feels like you’re in a different world, and you don’t hear anything; it’s very quiet.”

The two miles or so of new trails are just a portion of the network that Hosking and the Over the Hill Gang plan for the 160 acres. In all, Hosking said the area will feature about six and a half miles of new trail.

Volunteers are already at work on some of the new loops, but they are not yet open to the public. Noting that it is easy to get disoriented in the vast Dells area, Hosking urged users to stay on the established, white-dotted trails.

The city bought the 160-acre parcel of the Storm Ranch North in November 2017, and the purchase closed escrow in late January 2018.

Over the Hill Gang - Easter Island Trail by Courier Video