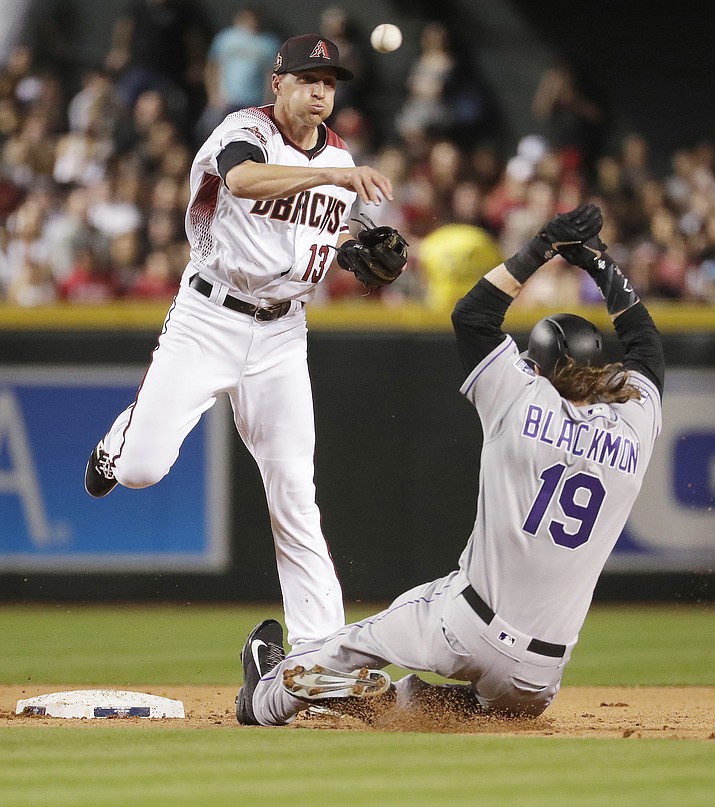 Arizona Diamondbacks’ Nick Ahmed (13) forces out Colorado Rockies’ Charlie Blackmon (19) as he turns a double play on DJ LeMahieu during the fifth inning of a baseball game Thursday, March 29, 2018, in Phoenix. The Diamondbacks dominated the Rockies — winning 8-2. (AP Photo/Matt York)

PHOENIX — Jake Lamb doubled and singled to drive in four runs, Patrick Corbin struck out eight while pitching into the sixth inning and the Arizona Diamondbacks beat the Colorado Rockies 8-2 on Thursday night in the season opener for the NL West foes.

David Peralta singled three times for Arizona, scoring twice and driving in a run. Jarrod Dyson added two hits, including an RBI triple, in front of 48,703 at Chase Field.

The teams opened the season on the same field where Colorado's 2017 campaign ended in an 11-8 loss to the Diamondbacks in last year's National League wild-card game.

Jon Gray (0-1), who started that game but didn't get out of the second inning, took Thursday's loss, too. He went four innings, allowing three runs and six hits.

Corbin (1-0) gave up two runs, seven hits and a walk over 5 2/3 innings in his first career opening day start. Archie Bradley didn't allow a hit in 1 2/3 innings of relief, striking out two.

With Colorado up 1-0, Peralta and A.J. Pollock led off Arizona's first with singles and Paul Goldschmidt walked to load the bases. On the first pitch he saw, Lamb lofted a fly ball that no one could chase down in front of the 413-foot sign in right-center. Peralta and Pollock scored to make it 2-1. Goldschmidt scored when Alex Avila grounded out to first, and Arizona led 3-1.

After Arenado's homer cut the lead to 3-2 in the sixth, the Diamondbacks scored three in their half of the inning. Peralta brought one run home with an infield single, and Lamb two more with a two-out bloop hit to left and it was 6-2.

Diamondbacks: OF Steven Souza Jr. (strained right pec) said he ran for the first time since the injury and did a little light swinging of the bat but has not tried to throw. Still, he said he didn't expect to feel this good so quickly. He started the season on the 10-day disabled list, as did RHP Randall Delgado (left oblique strain).

The new, much-hyped motorized cart available for relievers from both teams to come in from the bullpen sat idle all night as all the relief pitchers chose to jog in as usual.

Zack Greinke didn't get the opening day start for Arizona because of a minor groin issue that put him off schedule in the spring. Manager Torey Lovullo confirmed Thursday that Greinke would start the final game of the Colorado series on Saturday night. That means right-handers Taijuan Walker and Zack Godley will go against the Los Angeles Dodgers on Monday and Tuesday.

In a clash of left-handers, Colorado starts Tyler Anderson and Arizona goes with 15-game winner Robbie Ray in the second game of the three-game series Friday night.