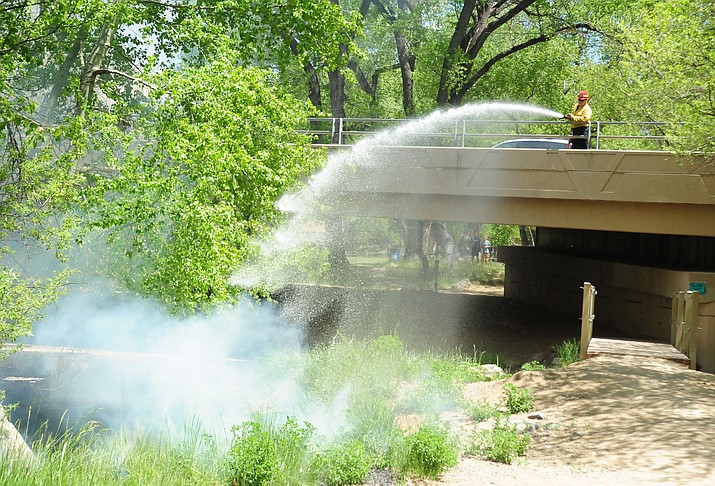 Prescott firefighters extinguish a wildland fire under the LaGuardia Bridge near Granite Creek Park on April 27, 2016, in Prescott. Highly flammable cottonwood ‘cotton’ was ignited. The ban on smoking in city parks, in part, is in response to fire risks. (Les Stukenberg/Courier, File)

Fifteen years ago, Prescott voters took a stand against smoking in most indoor public places when they narrowly approved a ban on lighting up in the workplace.

With that action in 2003, the community determined that smoking is not only a danger to health, but “a material annoyance, inconvenience, discomfort …”

Now, the question facing the Prescott City Council: Should that ban be extended to the city’s parks, trails, and open spaces?

A proposed ordinance to prohibit smoking in city parks will be among the issues the Prescott City Council will consider during a study session at 1 p.m. Tuesday, March 27, at Prescott City Hall, 201 S. Cortez St.

Depending on the outcome of that discussion, the ordinance could be back for a council vote in April.

While such a ban would be good news for those who say secondhand cigarette smoke can trigger health problems such as asthma attacks, others question the fairness and enforceability of the proposed ban.

The issue first came up during a Prescott City Council strategic-planning session in early March, when council members talked about how to better manage its problems with homelessness.

The brainstorming meeting generated a number of ideas, including the possible banning of smoking in city parks, which tend to attract groups of homeless people and smokers.

Several council members expressed interest in the idea, and afterward, City Attorney Jon Paladini said that, based on the council feedback, he would draft an ordinance to take to the council at a future meeting.

Since then, other issues have emerged as well, including smoke-related health concerns and wildfire dangers related to smoking in open spaces.

On March 13, local resident Brent Hatch appeared before the City Council to push for a ban on smoking in public parks because of health concerns.

Hatch said it was Prescott’s reputation for clean air that convinced him and his family to the move to the community from the Phoenix area about a year ago. His wife Phelecia, a lifelong asthma sufferer, immediately benefitted from the pure air, he said.

Still, the large number of smokers – especially around the courthouse plaza – has caused serious health problems for Phelicia, Hatch noted, for instance, that a recent encounter with secondhand smoke caused Phelicia to suffer an asthma attack that required a trip to the emergency room.

“It’s wonderful here, but (Phelicia) doesn’t want to be confined to our backyard,” Hatch said.

He recently started an informal petition asking for a ban on smoking in public parks, and about 100 people have already signed on.

Hatch acknowledges that a city-parks ban would not address smokers on Yavapai County’s courthouse plaza, but he says a ban by Prescott would be a start that could lead other entities to take a similar action.

On the other hand, local homeless advocate Daniel Mattson maintains that a ban on smoking in the parks would not only be virtually unenforceable, but would also be unfair to the homeless people who congregate in the parks.

“Really, I don’t see that as being viable,” Mattson said of the city’s proposed ordinance. “It would be really hard to enforce, for one thing.”

In addition, Mattson said, “What are people who don’t have a home going to do?”

Rather than a broad ban on smoking in the parks, Mattson suggests designating no-smoking areas in the city’s parks.

City Manager Michael Lamar said that although the smoking ban came up during the discussion about homelessness, other issues are driving the proposed ban. “At our last meeting, we had two people talk about clean air,” he said.

Lamar says that while the ordinance would give the city authority to deal with smoking-related problems in the parks, “We’re not going to turn into the cigarette police.”

Concerns have also come up about the danger of wildfire originating from a lit cigarette, and Lamar said the ordinance would allow for more monitoring of open spaces.

Councilman Jim Lamerson added that the city already bans smoking in businesses, and he says the expansion to the city’s parks is a logical step.

“If it’s good for me, why don’t we restrict city properties?” asked Lamerson, a business owner.

The proposed ordinance would ban smoking in virtually all city parks, trails, and open spaces, according to a city memo.