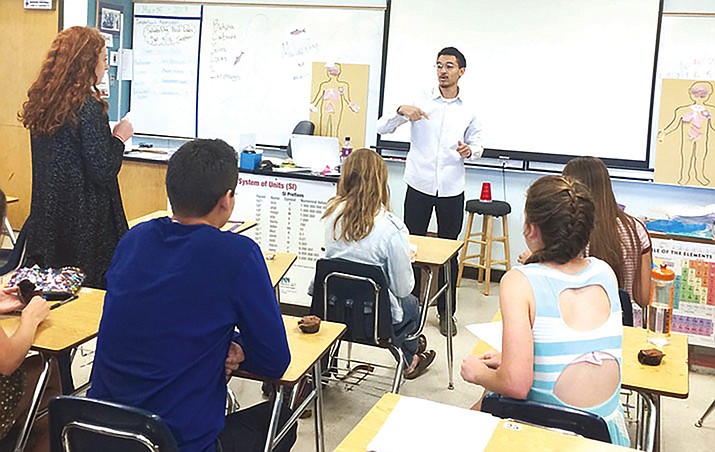 In this May 2017 Courier file photo, Prescott High School chemistry teacher Todd Harris Jr. speaks to his students. Th state House and Senate agreed Thursday to extend for another 20 years the 0.6-cent sales tax first approved by voters in 2000 for the state’s education sales tax — and the teacher salaries it supports. Without that action, the levy would self-destruct on June 30, 2021, taking with it the more than $670 million a year it now raises — $384 million of what’s collected is specifically earmarked for teacher salaries. (Nanci Hutson/Courier)

PHOENIX — The state’s education sales tax — and the teacher salaries it supports — is not going away.

With more than enough votes, the state House and Senate agreed Thursday to extend for another 20 years the 0.6-cent sales tax first approved by voters in 2000. Without that action, the levy would self-destruct on June 30, 2021, taking with it the more than $670 million a year it now raises.

An aide to Gov. Doug Ducey said the governor will sign it into law.

Thursday’s action did not come without opposition: Six representatives and four senators, all Republicans, refused to go along.

Rep. Eddie Farnsworth, R-Gilbert, said he’s not against funding education. And Farnsworth said he has no opposition to keeping the current levy in place.

But Farnsworth said he opposes how it’s divided up, pointing out that just $384 million of what’s collected is specifically earmarked for teacher salaries. He said if that’s the top priority, then it’s time to revisit who else gets a claim on those dollars.

That list includes $72 million for universities, $18 million for community colleges — and even $25 million for low-income taxpayers, defined as individuals earning $12,500 or less, or $25,000 for couples. They can get back up to $100 per household to compensate for the fact that those at the bottom of the income scale tend to spend a higher percentage of their income on sales taxes than those at the top.

Rep. Doug Coleman, R-Apache Junction, said he agrees. But Coleman, who helped craft what was approved Thursday, said this was the only way to get the votes to continue the tax and assure that schools won’t lose hundreds of millions of dollars in 2021.

Coleman said there’s time to consider changes in the distribution formula before the new levy kicks in.

That possibility worries supporters of the measure.

Dana Naimark, president of the Children’s Action Alliance, said a constitutional provision protecting voter-approved measure has prevented lawmakers from altering the current formula approved in 2000 for dividing up the $667 million now being collected each year.

This extension, however, lacks such constitutional protections because it was approved by lawmakers.

Naimark cited statements by Senate President Steve Yarbrough, R-Chandler, who said one of the benefits of having the extension enacted by lawmakers is that they now can “tinker’’ with the formula as needed. She said that could allow lawmakers to siphon off dollars for things like vouchers to help parents send their children to private and parochial schools.

“We think it’s important that parents and teachers and students understand how vulnerable this is,’’ she said. Naimark said her organization and other school advocates support the legislatively approved extension but “are counting on our elected leaders to protect this going forward.’’

Yarbrough acknowledged he wants lawmakers to revisit the formula before 2021 when the new levy kicks in. But he said that simply recognizes, as Farnsworth said, there may be some need for tweaking what was in the original 2000 plan.

He said some of the “pots’’ of money — individual allocations within the law — “were created to get votes,’’ citing in particular $8 million earmarked for school safety and “character education.’’

“I think that that very well may be better served over in a ‘pot’ that could increase teacher salaries,’’ Yarbrough said.

And Sen. Sylvia Allen, R-Snowflake, said lawmakers should decide if more of the $667 million now being collected should go directly to teacher salaries.

The bill approved Thursday already makes one change in the formula. It puts $64 million more into teacher salaries as that amount will no longer be needed for debt service on new school buildings.

But Rep. Reginald Bolding, D-Laveen, sniffed at the contention that shows the state is doing more to improve teacher pay which, depending on whose numbers are considered, are at or near the bottom nationally. He said that change translates into just an $18 a week pay hike — and not until 2021.

Other Democrats also complained that more is needed, though all agreed to go along with the extension.

The extension had to be a show of bipartisan support as the measure needed a two-thirds vote of both the House and Senate for approval.

That’s because while it simply keeps the current 0.6-cent levy in place, it technically is a new tax because the old one is expiring. And the Arizona Constitution requires a supermajority for any tax hike.

Rep. Noel Campbell, R-Prescott, said there is an option for those who, like he, believe additional revenues are necessary: Take the case directly to voters and ask them to expand the tax beyond the current 0.6-cent levy.

That’s exactly what is being proposed by Diane Douglas, the state school superintendent. She figures bringing the levy up to a full penny that would raise an additional $400 million a year, enough to give every teacher an 11 percent raise and still have $100 million left over for capital needs.

Jim Swanson, chief executive of Kitchell Corp., told Capitol Media Services he remains convinced that the state’s K-12 school system needs far more than what the tax generates. He and other business leaders are looking at doubling that 0.6-cent figure — or more — with the prime goal of raising teacher salaries.

But Swanson said the state university system and community colleges have their own financial needs.

The reason supporters of an expanded levy need to go to the ballot is political.

Several lawmakers who traditionally vote against tax measures agreed to support the bill approved Thursday because it simply extends a tax already in effect. But they are unwilling to put their names behind any more to increase it beyond 0.6 cent, leaving such a move without the required two-thirds vote.

It isn’t just the Legislature that remains a barrier.

Gov. Doug Ducey has pronounced himself firmly against any increase in taxes. And if he wins reelection in November, education advocates will still have to reckon with him and his veto stamp.

Thursday’s vote drew praise from Greg Wyman who drove down from Payson where he is school superintendent to urge lawmakers to approve keeping the tax in place.

“It is critical for all school districts, including Payson,’’ he told members of the Senate Education Committee. Wyman said a vote to extend the levy until at least 2041 “would send a very powerful message to our teachers that they do matter.’’