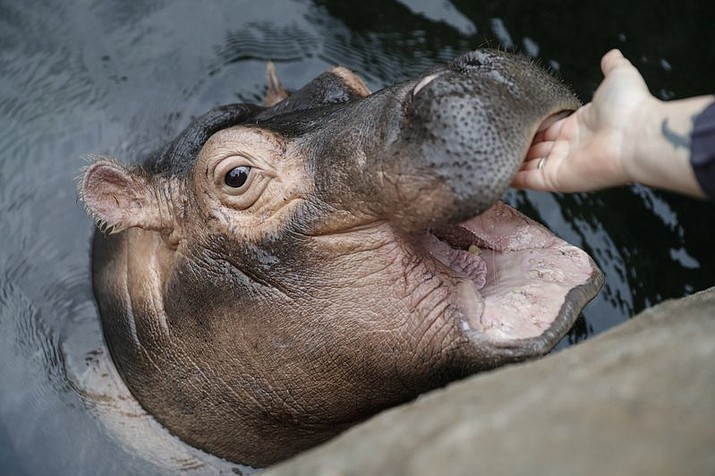 In this Jan. 10, 2018 file photo, Fiona, a baby Nile Hippopotamus has her gums rubbed by a zookeeper in her enclosure at the Cincinnati Zoo & Botanical Garden in Cincinnati. The San Antonio, Texas, zoo has launched a social media campaign matching Fiona with 2-year-old hippopotamus named Timothy. (AP Photo/John Minchillo)

We swoon when he looks at us .

A 2-year-old hippo named Timothy at the zoo in San Antonio, Texas, has launched his courtship via social media . Posts declared her the “most beautiful hippo” he’s ever seen and wonder if they can be “boyfriend and girlfriend” someday.

Fiona’s only a year old, and her Cincinnati Zoo handlers have a lot of questions before she’ll be ready to date. She became an internet sensation, drawing millions of social media views, as the zoo posted progress reports and photos after her Jan. 24, 2017, premature birth at a dangerously low 29 pounds (13 kilograms). Her visage has been on T-shirts, ornaments, cookies and even beer.

Genetic compatibility will be needed.

And the Cincinnati Zoo asked Friday via social media if Timothy could get used to all the attention to Fiona and how he felt about “paparazzi.” Timothy’s post said his family has media experience, because his grandfather, Tumbo, was a cover model for National Geographic magazine.

Another key question they posed: Is he willing to relocate to Cincinnati?

Just before Fiona’s first birthday, the Cincinnati Zoo’s mammals curator Christina Gorsuch said the preference will be to keep her home when she reaches breeding age at about 5 years and to bring in a male hippo.

“It will be great for her to be able to stay here her entire life,” Gorsuch told The Associated Press. “We never know for certain if that will work out.”

Gorsuch also said there will be “plenty of boys” for Fiona by then because of the number of hippo births in recent years.

For she no doubt delights the eye of other hippopotami.