Wildland fires cause scare in both Chino Valley, Prescott
One was the result of residential burning; other caused by fence welding 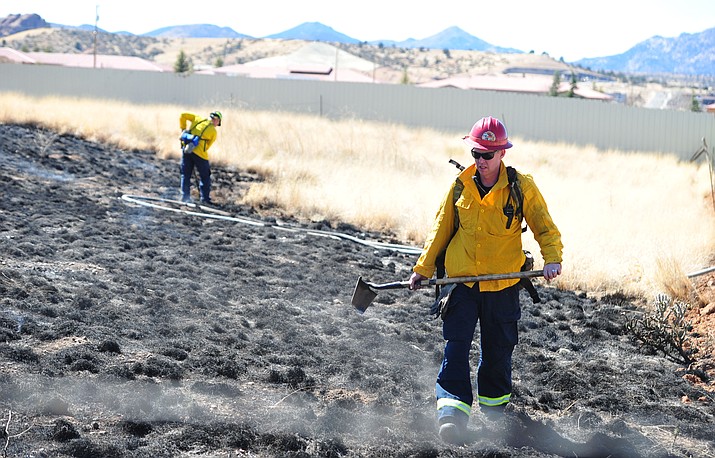 Prescott firefighters put out spots in a wildland fire along Side Road in Prescott Monday, March 19, 2018. (Les Stukenberg/Courier)

Two wildland fires were fortunately extinguished Monday without injuring anyone or damaging any structures.

The first occurred in Chino Valley around 12:30 p.m.

A resident with a residential burn permit was burning some weeds at his home along S. Reed Road when the flames managed to creep into nearby dry grasses, said Central Arizona Fire and Medical Authority (CAFMA) Fire Marshal Rick Chase.

“It quickly spread to approximately five acres and burned on to three different properties,” Chase said.

In this case, the flames were in light grasses in an open field, so firefighters were able to contain the burn without further incident, Chase said.

While burn permits are free and can be obtained on CAFMA’s website, they do come with rules, Chase said.

Most importantly, a water source – such as a gardening hose – needs to be readily available when the burn is taking place. Additionally, no torches are allowed to be used for open burning and the brush must be in piles before being ignited. Only natural vegetation can be legally burned.

“If you’re not following the rules, that’s when police get involved and fines can be issued,” Chase said.

About an hour after the Chino Valley wildfire was called in, a grass fire was reported near Side Road on the north side of Prescott.

The caller said the fire was burning quickly and was within 20 feet of a structure, so the original single engine company response was upgraded to include an additional engine, a brush truck and a battalion chief, according to a Prescott Fire Department (PFD) news release.

Before any resources arrived, the welders that sparked the fire while building a fence were attempting to extinguish the fire with shovels and fire extinguishers until a neighbor with a water truck came by and assisted, the release said. The welders told fire officials that “they thought they had it out”, when the wind picked up and it “took off”.

Luckily, the fire was relatively contained between a road, a driveway and an improved fence line.

“All those barriers, as well as the water truck, kept the fire manageable and small,” Devendorf said.

Unless the Prescott area begins to see quite a bit more precipitation in the coming weeks, then there is a good chance fire restrictions will go into effect early this year, Devendorf said. This would mean stage one fire restrictions starting sometime before Memorial Day – the normal date for the start of restrictions.

“Until then, know that grasses and brush are ready to burn,” he said. “Please be careful when introducing fire or sparks into the wildland area.”