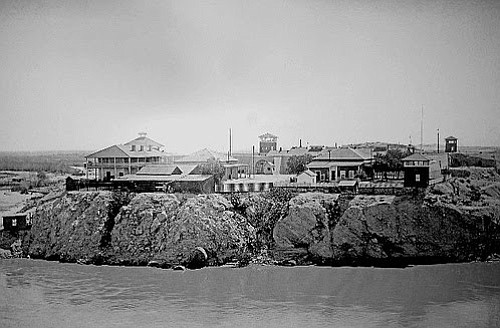 William “Buckey” O’Neill is perhaps Prescott’s most famous and revered historical figure. He was also one of Whiskey Row’s most devoted customers and had a knack for stepping smack-dab into the middle of historic events. O’Neill was a natural leader and a nervously energetic go-getter with an ambition that went beyond a run-of-the-mill quest for success. 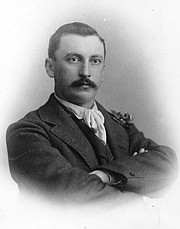 Beginning in 1882, after departing Tombstone where he worked for the Tombstone Epitaph during the days of Wyatt Earp, the well-educated O’Neill became one of Prescott’s most active and influential citizens until leaving it in 1898 to fight in the Spanish American War with Theodore Roosevelt’s legendary Rough Riders.

O’Neill earned the sobriquet “Buckey” before he hit 20 years of age in the gambling halls of Phoenix where he became a gambling hall legend playing his favorite game, faro. Faro was wildly popular in the 1800s because a player’s odds for winning were higher than in other card games. On the back of some faro cards was a drawing of a tiger, and sometimes just the act of playing a faro game was called “bucking the tiger.” Most of the time it meant a player going for broke and betting it all. The latter meaning applied to the gutsy William O’Neill, who became “Buckey” because of it.

When Buckey came to Prescott — where he lived for 16 years — and discovered the Whiskey Row way of life, he continued to buck the tiger often and always with a cigarette dangling from his mouth. His first card-playing moments were usually spent in the Cabinet, Diana or Sazerac saloons, then later in the Palace after it became prominent on the Row. Buckey’s risk-taking surfaced time and time again, so much so that his detractors saw his gambling as an addiction.

The chain-smoking O’Neill worked first as a court reporter for the Miner before starting his own newspaper, Hoof and Horn, which ran for four years. In 1886, he was made captain of the local militia, the Prescott Grays. That same year he ran for political office for the first time, that of probate judge and superintendent of schools.

Being a well-known Whiskey Row habitué led some adversaries to run a smear campaign against him. Buckey was portrayed as a reckless gambler and drunkard: “Though young in years, his bleared eye and flushed face give evidence that the nights of dissipation — the days of continuous drunks — are slowly but surely undermining a naturally strong and vigorous constitution.”

Buckey, however, seemed to lead a charmed life. These attacks backfired. Instead, they made him more appealing to the common man. Buckey won the election.

Next came a two-year stint as Yavapai County Sheriff. Before he rode into immortality as a Rough Rider, O’Neill was elected mayor of Prescott in 1897.

Even if his Rough Rider experience – which led to the magnificent statue honoring him “and his comrades who died while serving their country in the war with Spain” on the courthouse plaza – had never happened, Buckey still would have been found in today’s Arizona history books. Why? In the spring of 1889, four cowhands from the famous Hashknife outfit near the Little Colorado River in northern Arizona — robbed a train near Diablo Canyon, about 12 miles northwest of Meteor Crater.

Buckey, as Yavapai County sheriff, led a four-man posse that chased the outlaws relentlessly through the rugged areas of the Navajo Indian Reservation, as far as Lee’s Ferry on the Colorado River and through parts of Glen Canyon. Almost three weeks long, it proved an impressive chase and capture.

The captured men were taken to Salt Lake City and put on a train to Prescott. Along the way one of the prisoners, J.J. Smith, escaped. Buckey went after him, solo, but after six hours gave up and returned to the train. While Smith was still on the lam, the other three prisoners were tried, convicted and sentenced to 25 years in the Yuma Territorial Prison.

At some point, Smith was recaptured in Texas and hauled to Prescott to stand trial. Buckey had to collect Smith’s three partners in Yuma for his trial, which he did by train. When they arrived in Prescott, the famous Canyon Diablo train robbery soon became a Whiskey Row story. That story will be told in this column next week.

Brad Courtney is the author of “Prescott’s Original Whiskey Row.”

“Days Past” is a collaborative project of the Sharlot Hall Museum and the Prescott Corral of Westerners International (www.prescottcorral.org). This and other Days Past articles are also available at www.sharlot.org/library-archives/days-past. The public is encouraged to submit proposed articles to dayspastshmcourier@gmail.com. Please contact SHM Library & Archives reference desk at 928-445-3122 ext. 14, or via email at dayspastshmcourier@gmail.com for information.