To play or not to play is not the question
How do recreational athletes protect themselves from incurring huge medical costs after an injury? 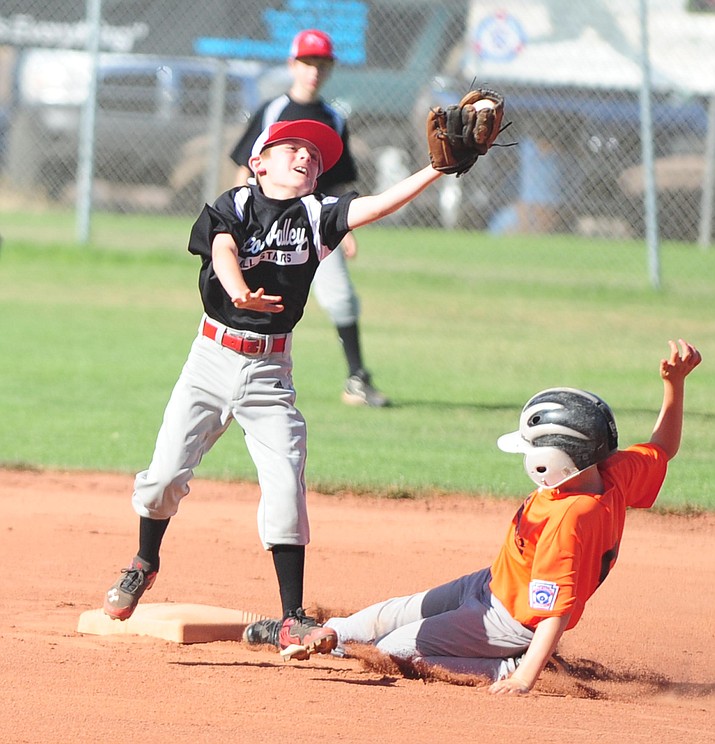 Prescott Valley’s Dylan Turk tries to tag out Williams’ Cody Jensen as the Prescott Valley All Stars play the Williams All Stars in the first round of the Little League District 10 Tournament in 2014. (Les Stukenberg/Courier, file)

When a recreational ballplayer took a “ball to the face” in October 2014, the medical treatment alone surpassed $118,000.

Jerrid Allen, 33 at the time, was playing in a coed softball league at Mountain Valley Park on the evening of Oct. 20, 2014. He claims two light poles were out of order, one in right/center field and one adjacent to the third base dugout. The same lights were out on previous nights.

An eight-year participant of organized softball, Allen was in right-center field and lost a high pop fly due to lack of illumination, he said. The ball struck him in the face, causing numerous fractures of his nose, nasal cavity, eye socket, torn ligaments and a traumatic brain injury.

He received a CT scan at Yavapai Regional Medical Center and then was transported to Banner Good Samaritan Hospital in Phoenix for surgery. He was out of work for two weeks, resulting in nearly $3,000 in lost wages, and would need annual CT scans for five years.

Allen claims the umpire could have postponed play because of the malfunctioning lights but did not.

In April 2015, Jerrid Allen served the Town of Prescott Valley with a claim for $350,000. The judge ruled against the ballplayer’s claim in November 2016, under the recreational-use immunity statute, and Allen appealed.

On Tuesday, March 13, 2018, the Arizona Court of Appeals sent the case back to Superior Court giving Allen a chance to pursue his claim by proving by clear and convincing evidence that the town acted with gross negligence.

The Court ruled that Allen’s participation in the town’s softball league fell under state statute that gives the town immunity based on Allen being a “recreational user” who was charged a “nominal” fee.

“Under this provision, a ‘recreational user’ may recover against a property owner in tort only upon proof of ‘willful, malicious or grossly negligent conduct,’” Appellate Judge Patricia Trebesch wrote.

Therefore, the town is protected from the lawsuit unless Allen can show that the employees acted with “gross negligence,” requiring a higher degree of determination, said Steven Zraick, PV deputy town attorney.

Mark Kille, attorney for Allen, said Thursday, March 15, that his client is still recovering physically from his injuries. They will proceed to a jury trial in Superior Court to request damages that Allen is entitled to under Arizona law, Kille said.

“I think it is ludicrous that you pay a fee to go play softball in an environment you believe is safe. You pay for the lighting, the umpires, scoreboard and timers. And part of the amenities you are paying a fee for are not functional or available. It is ludicrous that the umpires, despite knowing the danger involved, still allowed the game to go forward,” Kille said.

So you want to participate in some kind of athletic sport on an informal, fun kind of level, maybe a coed softball league, or for your kids, Little League or youth soccer.

Coaches, participants and spectators all do what they can to keep the playing fields safe, but whether you are an adult or child, there is some risk to playing sports.

The Town of Prescott Valley Parks and Recreation Department offers several adult sports leagues, including volleyball, men’s 3-on-3 basketball, softball and kickball; and fitness classes such as a women’s BootCamp, yoga, 50+ aerobics, Zumba and ballet.

During PV Parks and Recreation Director Brian Witty 14-year tenure, he said there has been only one case where a player incurred an injury, filed a lawsuit blaming the town for negligence, and took it to the state Court of Appeals. (See related story on Allen v. Town of Prescott Valley.) Other cases did not reach this level of dispute or were non-sports related cases, he said.

All participants who sign up for town programs sign a waiver that releases the town of liability, Witty said.

The waiver also requires participants to relinquish all claims against the town and its employees relating to injuries, damage, or loss.

The City of Prescott, too, requires participants and parents sign an Accident Waiver and Release of Liability form, and to assume all risks.

In part, it states, “I acknowledge that this recreational activity may be an extreme test of a person’s physical and mental limits and carries with it the potential for death, serious injury and property loss. The risks include, but are not limited to, those caused by terrain, facilities, temperature, weather, conditions of equipment, vehicular traffic, water conditions, actions of other people including, but not limited to, participants, volunteers, spectators, coaches, event officials and event monitors, and/or producers of the event, and lack of hydration.”

The form includes releasing any liability to the city, employees and volunteers for death, disability, personal injury, property damage or theft. The participants also sign that they assume responsibility for all costs related to medical treatment in the event of injury, accident or illness.

In the past seven years, the time Joe Baynes has been Prescott’s recreation director, the city has not had any lawsuits filed against it asking for medical costs resulting from participants’ injuries. He said he felt the waiver covers the city well.

“We care about player safety and try to implement as many safety rules as we can, and we keep up the condition of our fields so we don’t have issues around field negligence,” Baynes said.

Little League participation requires a signature on similar waivers, and this warning: Protective equipment cannot prevent all injuries a player might receive while participating in baseball/softball.

“The unfortunate part about when we are out recreating, is that anything can happen,” Witty said. “Those types of things can occur even to professional athletes under the best circumstances. Our bodies fail us, and we have to be prepared for that kind of thing.”

What can parents and adult players do to prevent paying out massive medical expenses if/when an injury should occur?

Witty said reducing risk of injury also means participants “play within the context of the rules.” This includes obeying rules against the use of certain kinds of equipment such as bats that are manufactured to hit the ball farther, or different types of baseballs or softballs that fly farther and can be made of a harder texture.

The town also works to create a proper play environment. “We want to enrich and grow our children and let them have fun. We make sure the irrigation systems run properly, the fences and grass are maintained,” he said.

As for nightlights, he said, yes, sometimes the power goes out or bulbs burn out. Over the course of a year, maintenance workers will replace 20 to 30 bulbs on the town’s six ballfields.

“If we find a situation, if anyone references one to us, we’ll go out and assess the situation. If it’s a whole bank or creates a hole, it’s immediately attended to. It could be bulbs or another issue,” Witty said.

The town has stayed in compliance with the manufacturer’s warranty and maintenance programs since the lights were installed in 2001, he added. In order to host Little League, it also has to certify the fields with certain light standards.

“It’s all a matter of circumstances. This happened to be one of those,” Witty said, referring to the incident involving Jerrid Allen.