A few upsets early, but in the end, Villanova wins it all
College Basketball: NCAA Tournament Preview 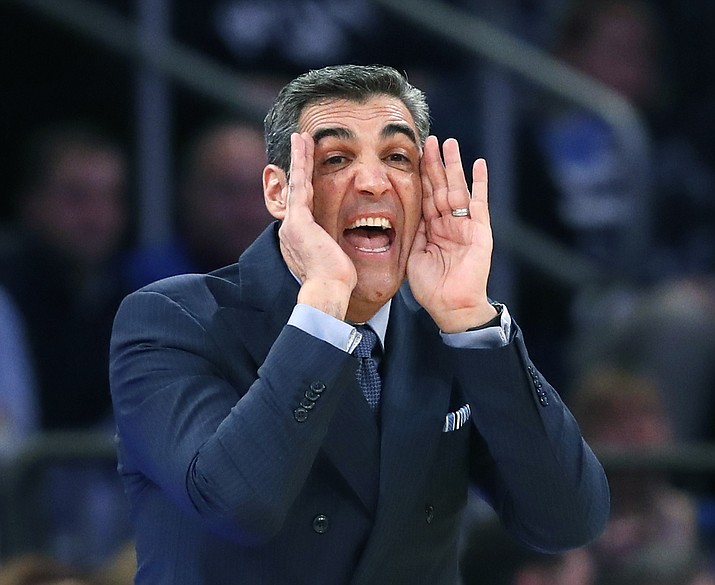 Villanova coach Jay Wright shouts to players at the other end of the court during the second half Thursday, March 8, 2018. (Kathy Willens/AP, File)

Ordinarily, the rule when filling out brackets is that the First Four games in Dayton should be ignored because those teams are all incapable of winning a game when the “real” tournament starts on Thursday.

Welcome to 2018, where two of the last three teams picked for this tournament not only will win their opening round games — but will then go on to win more games later in the week, and therefore should be showing up on billions of the gazillions of brackets that will be filled out in the coming days by people who will try to line their pockets by winning all those $5 and $10 bills that coworkers happily deposited into the office NCAA Tournament pool.

America, you need to know about St. Bonaventure and Syracuse.

Many people did not think they merited spots in this field. They are wrong. The Bonnies are seriously underseeded and should not be going to Dayton. The Orange — not to make this argument too scientific — lost a bunch of games to a bunch of teams that are really good.

It’s finding the upset winners that will either make you or break you in NCAA bracket pools. When Syracuse and St. Bonaventure are still playing this weekend, those wins will help you have bragging rights in the office for the next 52 weeks. Because — spoiler alert — in the end, the higher seeds will be the last teams standing.

A year ago in this space, we told you that North Carolina would win the national championship, so clearly the information contained here is guaranteed to help you win your pool. (We also told you that Vermont was going to the Sweet 16, so take all of this with many grains of salt.)

So without further ado ... the picks.

FIRST ROUND WINNERS: Virginia, Kansas State, Kentucky, Arizona, Miami, Tennessee, Texas, Cincinnati. Nary an upset to be found, with the exception of Texas over Nevada and Kansas State over Creighton. Kentucky and Arizona will have to work for their wins. Miami could struggle, but Lonnie Walker IV will get one win from what’ll almost certainly be his lone NCAA appearance.

SECOND ROUND: Virginia, Kentucky, Tennessee, Cincinnati. Mild upset with Kentucky over Arizona, but that’s not really an upset.

REGIONAL FINAL: North Carolina over Gonzaga, in a rematch of the 2017 title game.

This sends three ACC teams and a Big East team to the Final Four.

V for Victory. V for Villanova. Jay Wright will get his second national championship in three seasons.

Sun Devils move up only one spot to No. 17 after Kansas upset
Villanova loss, ACC flameout reshape NCAA Sweet 16 bracket
Duke reclaims No. 1 in AP Top 25; Tennessee falls to fifth
Gonzaga passes Kansas for No. 1 in AP poll, Duke is No.3
A look at the best to come in this year’s NCAA Tournament