Greek goddess on her way to Alabama for restoration
Supervisors approve $30,000 to repair courthouse fountain, statue 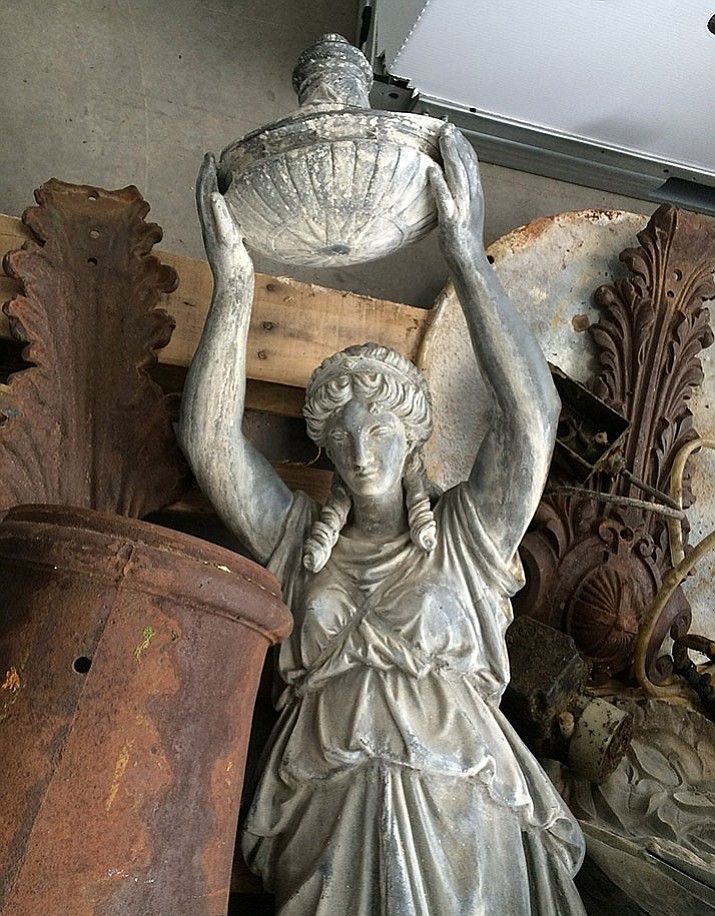 Lady Ermintrude lies among the rusty damaged artifacts of her fountain centerpiece. She may yet be resurrected in bronze and returned to her home on the courthouse plaza. (Courier file photo)

Whether donations come through or not, Lady Ermintrude is soon to be on her way to Alabama for restoration and subsequent return to the Yavapai County Courthouse Plaza.

The Board of Supervisors at its March 7 meeting approved, by a 4-1 vote, an expenditure of $30,000 from the Facilities Department maintenance budget to pay for repairs and restoration to the fountain and statue. 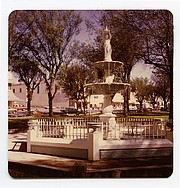 Lady Ermintrude tops the fountain on the courthouse plaza in this pre-1976 photo. (Sharlot Hall Museum/Courtesy)

Supervisor Craig Brown, with the dissenting vote, said the supervisors had agreed this past year that the courthouse fountain would need donations or grant money to pay for restoration. He said the project has not been budgeted.

After the meeting, County Facilities Director Kenny Van Keuren said the money is available from the courthouse maintenance budget. The $30,000 will cover about $21,000 for repairs, and the cost of shipping and installation.

“The irony is, when we were searching for restoration companies, we found a foundry in Alabama with this exact same fountain,” Chairman Rowle Simmons said. “They have done several of them. I guess it was popular in the 1930s.”

If it weren’t for the foundry’s mold, Van Keuren said, the county wouldn’t undertake the restoration project. Repairs will take about six weeks.

Lady Ermintrude used to stand in the fountain on the northeast side of the courthouse, and was removed in 1976. The Greek goddess statue and parts to the fountain were stored at Sharlot Hall Museum before the county reclaimed the damaged pieces. The current fountain also is in need of repairs, Van Keuren said, and why put money into that?

Simmons said an agency approached him willing to donate money for the restoration, but he is not in a position to announce anything at the moment. He voted to approve the county expenditure because, “I would like to get rolling on this.”

If the donation comes through, the $30,000 approved at the March 7 meeting will return to the county facilities’ budget.

“When it comes to the downtown courthouse — even with the chairs, we’re getting chairs that look like the time period the facility was built — we want to keep the historic feel about it. This is just another part of that,” Supervisor Jack Smith said after the meeting.

In recent years, the county has restored parts of the interior and exterior of the courthouse.

“Now we’re working our way on the outside to get things the way they were,” Van Keuren said. “I think it’s an important piece of the history of the courthouse plaza.”

In other business, the board approved:

• $19,000 in memory of the Granite Mountain Hotshots to the Arizona Wildfire and Incident Management Academy for scholarships.

• $205,291 for camera system upgrades and roof replacement at the Camp Verde jail.