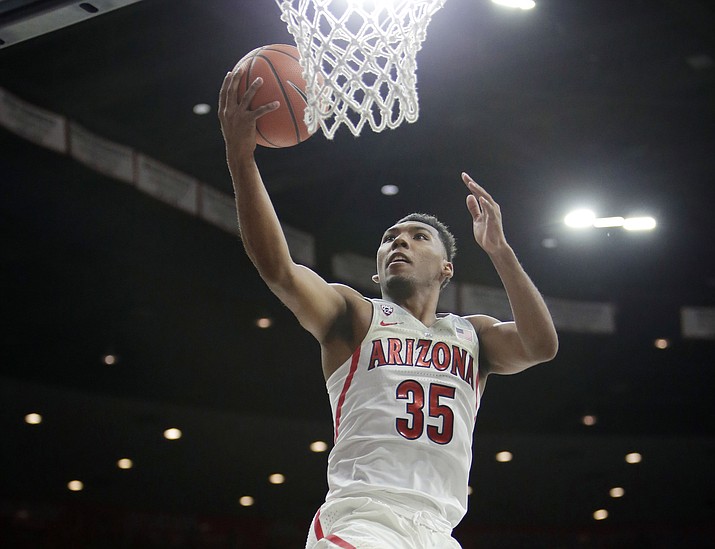 In this March 3, 2018, file photo, Arizona guard Allonzo Trier (35) scores against California during the second half in Tucson. Trier was selected to the AP All-Pac-12 team on Tuesday, March 6, 2018. (Rick Scuteri/AP, File)

Wildcats coach Sean Miller found himself in the crosshairs late in the season when an ESPN report alleged he was caught on an FBI wiretap discussing a $100,000 payment to lure top recruit Deandre Ayton to the school.

Oh, and preseason All-American guard Allonzo Trier had to miss two games for testing positive for the same banned substance that cost him 19 games last season.

Through all the tumult, the 15th-ranked Wildcats stayed steady on the court.

“A lot lesser programs, teams, universities would have crumbled and we didn’t,” Miller said. “That says something about us and our future.”

Arizona’s immediate future is the Pac-12 tournament in Las Vegas this week. The Wildcats (24-7, 14-4) are the top seed and one of four teams to get a bye into Thursday’s quarterfinals. They will play the winner between No. 9 seed Arizona State and No. 8 Colorado.

Arizona closed the season with four wins in five games, its only loss on the road to Oregon without Miller, who was held out a day after the ESPN report. Miller missed three practices before vehemently denying the report in a statement last Thursday. Less than three hours later, university President Robert C. Robbins said Miller would remain as coach.

The Wildcats beat Stanford that night and overcame an emotional senior day on Saturday to pull away from Colorado late for their fifth Pac-12 title in six seasons.

“Lot of emotions, an emotional week, a lot of things flying around,” Arizona point guard Parker Jackson-Cartwright said. “Everybody was just drained mentally and physically.”

A few more things to look for from the Pac-12 tournament, which starts Wednesday at T-Mobile Arena:

Southern California had a chance to move itself away from the NCAA Tournament bubble in its regular-season finale against rival UCLA. An 83-72 loss keeps the Trojans (21-10, 12-6) bubbling.

USC has few marquee wins, but did finish second in the Pac-12 behind Arizona.

The Trojans open the conference tournament on Thursday, against the winner between Oregon State and Washington.

Unlike USC, Arizona State does have marquee wins on its resume. The Sun Devils beat Kansas at Allen Fieldhouse and Xavier on a neutral court, giving them arguably the two biggest wins of any team in the country. They also went 12-0 in nonconference. But Arizona State (20-10, 8-10) was inconsistent through the Pac-12 season, finishing tied for eighth with Colorado.

The Sun Devils had 15 conference games decided by single digits, most since 1996-97, according to STATS/Pac-12 Network.

“Even though there are some that might want to say that that part of the season was so long ago that it shouldn’t count, it does count,” Arizona State coach Bobby Hurley said after an 84-83 loss to Stanford on Saturday. “This is a season. There’s a Pac-12 season and then there’s an entire season,” he said. “All the close games just prove you’re going to have to bring a very good game to the table to beat our team.”

UCLA avoided ending the season on a three-game losing streak, thanks to its win over rival USC. That gave the Bruins a Quadrant 1 win, a first-round bye in the conference tournament and a little breathing room.

“It puts us in a great situation,” Bruins coach Steve Alford said. “Now we get a little bit more rest.”

UCLA opens against the Cal-Stanford winner on Thursday.

Utah lost four of its top six scorers from a year ago and was picked to finish seventh in the Pac-12. The Utes played with a mountain-sized chip on their shoulder all season and have put themselves in contention for an NCAA Tournament berth while earning Larry Krystkowiak coach of the year honors from The Associated Press.

“I am completely convinced that we can win the tournament,” Krystkowiak said. “I’m sure there’s a lot of teams that feel the same thing. You’ve got to catch lightning in a bottle, catch a few breaks. I think it’s a little bit open.”