Prescott Library’s ‘You Too!’ program heightens access for vision- and hearing-impaired 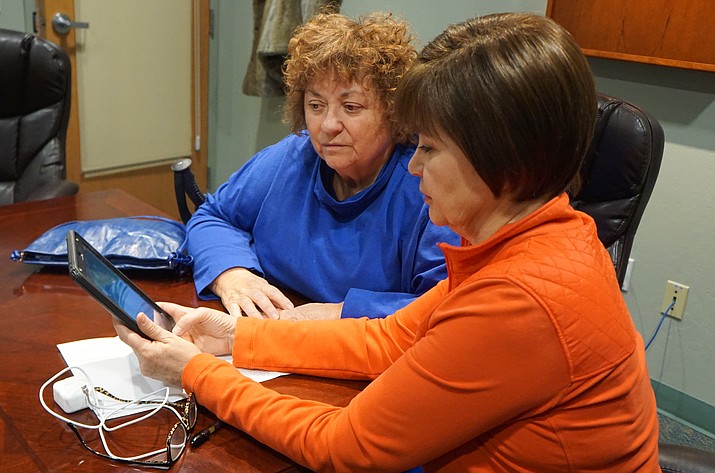 Prescott resident Vera Dicicco, left, listens as Prescott Public Library volunteer Paula Williams describes the features of an iPad equipped with assistive technology apps for the vision impaired. The tablet is available through a new program at the library -- You Too! Community Access and Engagement through Assistive Technology. (Cindy Barks/Courier)

For much of her life, Vera Dicicco was accustomed to quenching her “thirst for knowledge” with books on eclectic topics such as Ukrainian literature, the economy, and the arts.

“I love learning new things,” Dicicco said. “I used to be a very creative person.”

Her reading opportunities dwindled in recent years, however, with the onset of macular degeneration.

Dicicco got the devastating diagnosis about two decades ago and experienced a gradual loss of her sight over the years. By about a year ago, she said, she was virtually blind.

“Now, my world is all heavy fog,” Dicicco said. “I see contrasts – light and dark. But there is nothing I can see anymore as far as reading goes.”

Despite the loss of her sight, Dicicco said, “I still have a thirst for knowledge, and I’m looking for more purpose in life.”

All of those things made Dicicco a prime candidate for the Prescott Public Library’s new “You Too! Community Access and Engagement through Assistive Technology” program.

“It sounds like you’re the perfect person to start with,” Martha Baden, the library’s manager of public services, told Dicicco during a recent training session.

In late February, Dicicco sat down with Baden and library volunteers Niki Kaus and Paula Williams to begin learning the You Too system, which features iPad tablets equipped with assistive-technology apps for vision and hearing loss.

“I feel grateful to be in it,” Dicicco said of the training for the new program. “I’m going to give it my all.”

Library patrons are able to check out the tablets, which provide “text-reader” assistance for the vision-impaired, and “voice-to-text” help for the hearing impaired. Baden said the check-outs are available for three weeks at a time.

Six volunteers are helping launch the program, which also provides help at Prescott City Council meetings for the hearing impaired.

Baden said she wrote a grant application for the You Too program about a year ago, and the library was awarded the grant in 2017.

A number of anecdotal instances at the library led Baden to believe that many Prescott residents could use the additional help.

For instance, she pointed to the significant number of large-print books that are checked out at the library. “About one out of five requests I get are large-print preferred,” said Baden, who does the book ordering for the library.

In addition, Baden said library employees often interact with library patrons who have a difficult time hearing the staffers’ responses in a normal speaking tone.

A number of advocates of hearing and vision assistance had also come forward to request additional help.

With Prescott’s significant percentage of retirees, Baden said, the You Too program seemed to make sense for the community.

“I have easily seen and talked with over 1,000 Prescott-area residents with hearing loss in the over 11 years I have lived in Prescott,” Clevenger said. “Almost every time when I ask those individuals about the assistive technology for hearing loss, they don’t know what I am talking about other than hearing aids.”

Clevenger said available technology, such as that available through the You Too program, can make a significant difference for the hearing impaired.

During a recent City Council meeting, he used one of the You Too iPads. “I was able to read captioning of what was being said on the floor by the council members and mayor almost to every word,” Clevenger said.

Throughout his life, Clevenger said, “Assistive technology for hearing loss has been tremendously important for me in my development as an individual from infancy to the present.”

He added that the available “amazing technology” includes everything from the assistive software such as that available through You Too, to assistive listening devices, cochlear implants, specialized captioning telephones, and smartphone apps.

Training in the You Too program began in February and will continue through June. The library’s community partners on the project include: Osher Lifelong Learning Institute at Yavapai College; Prescott Adult Center; the City of Prescott and the Prescott Police Department; El Gato Azul; and Prescott Computer Society.

More information on the library’s program is available by contacting Baden at Martha.baden@prescott-az.gov, or by calling 928-777-1519.

Jackson: Come check out all the library offers this year
Prescott man answers call to help hearing-impaired
COMMUNITY PROFILE: Deaf is a disability, but shouldn't be a handicap
Group forms to aid area's hard of hearing
Building skills for those with hearing loss